A University of Saskatchewan researcher is experimenting with novel cropping systems. 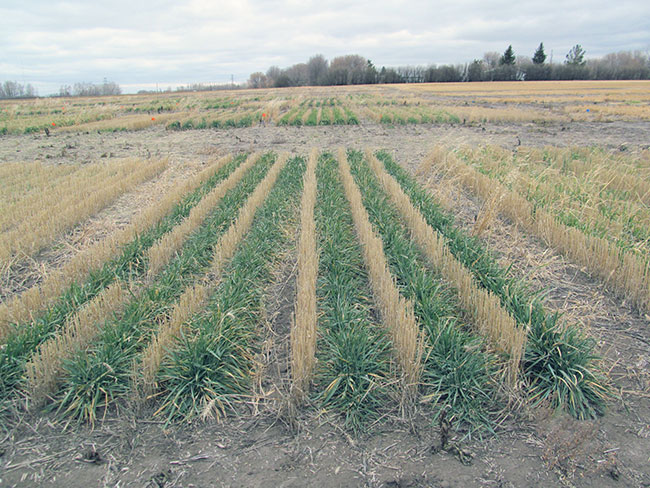 Last October, after the Year 1 spring wheat crop was harvested, the interseeded winter cereal was in a vegetative state ready to overwinter. Photo courtesy of Aaron Gerein/University of Saskatchewan.

Chris Willenborg is testing an out-there idea that just might work. He calls his concept “accelerated cropping systems” – systems that involve planting twice but getting three crops in two years.

“The hope is that these systems will provide a greater overall yield with three crops rather than two; higher yield tends to translate into higher revenue for the growers,” explains Willenborg, an associate professor at the University of Saskatchewan. “We’re also hoping that these systems will provide some ecosystem services to growers, like reducing weed populations, improving beneficial organisms, and enhancing soil properties.”

With funding from the Western Grains Research Foundation and Saskatchewan’s Agriculture Development Fund, Willenborg and his research team are exploring this idea in a Saskatchewan field trial that started in 2018.

This project involves two experiments. In both experiments, they are using spring wheat as the setup spring crop in Year 1, interseeding it with a winter cereal. “We used spring wheat as the setup crop just because of logistics,” Willenborg says. “This system, if it works, may well work with a broadleaf setup crop like canola or pea [as long as you don’t spray a desiccant on the pea crop].”

They have chosen winter triticale, hybrid fall rye and open-pollinated fall rye for the project’s winter cereals. “The old lines of fall rye tend not to vernalize and would overwinter. So we thought some of those open-pollinated varieties might be better choices for this cropping system,” he says.

Willenborg notes, “A lot of folks now have RTK [real time kinematic] guidance capabilities, so in Year 2 they can seed the spring crop between the rows of the winter cereal if they need to.”

The project is taking place at two sites in the Saskatoon area and one site at Scott. Willenborg and his team are collecting data on such factors as crop emergence, weed counts, weed biomass, crop biomass, greenfeed yields, grain yields and thousand kernel weights. They will also be measuring quality characteristics like grain protein, fibre and oil content in the grain crops. And for the winter cereal silage, they will be measuring things like crude protein, total digestible nutrients, acid detergent fibre, and neutral detergent fibre. Some of Willenborg’s colleagues are collecting data on beneficial insect populations and soil characteristics.

The project’s goal is to see how accelerated cropping compares with a regular two-crop system.

Willenborg is hopeful that total yields will be higher with three crops over the two-year period. “In some of the research from the U.S., they tend to get slightly depressed individual yields but overall higher yields when they have any type of a double crop system.”

He thinks beneficial insects may do better under accelerated cropping mainly because the soil is covered in the fall and the spring, which provides better habitat particularly for insects like ground beetles. Also, the system’s continuous crop cover should help suppress weed growth, reduce soil erosion and improve soil health, although any effects on soil properties may not be noticeable in the short-term.

In 2019, Saskatoon had the driest spring on record, so the trial’s Year 2 yields might be reduced, and the winter cereal yields certainly will be. “But the positive side is greenfeed last year was going for as much as $100 for a 1,500-pound round bale. So you are getting significant value from the winter cereal crop,” Willenborg notes.

The dry spring in 2019 also accelerated crop development in the winter cereals, so the seeding date for the Year 2 spring crops was not excessively delayed. For example in Experiment A, Willenborg’s team took off the silage crops and planted the spring crops around June 8. That date would be late for spring seeding in a normal year, but it is actually similar to when spring crops were planted during the previous five years in the Saskatoon area because of very wet conditions.

Willenborg originally intended this trial as a two-year project. However, because of the extremely dry conditions in 2019, he is considering extending it to a third year to make sure they have enough data to draw some useful conclusions.

For now, Willenborg says, “Don’t try this at home yet. It should work, in theory, and certainly double crops have worked well in the U.S. But whether we can get double crops off here remains to be seen, and three crops, as we propose here, is completely unknown. Plus we’re also adding that third variable of seeding those two crops at the same time in Year 1.

“Don’t try this at home yet. It should work, in theory, and certainly double crops have worked well in the U.S. But whether we can get double crops off here remains to be seen, and three crops, as we propose here, is completely unknown.”

“And if we find that this system does work – that we do see higher yields and better agro-ecosystem benefits – then it will still probably need tweaking, things like earlier crop varieties and varieties that adapt well to being intercropped with one another.

“However, we are hopeful the idea has merit. I think it could be a really appealing system for growers in regenerative agriculture [farming systems that enhance ecosystem services] and those with livestock. Conventional grain growers can also benefit by selling greenfeed or silage for alternative income, so in a way it will help link grain systems with livestock systems.”