A new study has uncovered a gene that contols a slow-darkening trait in pinto beans. 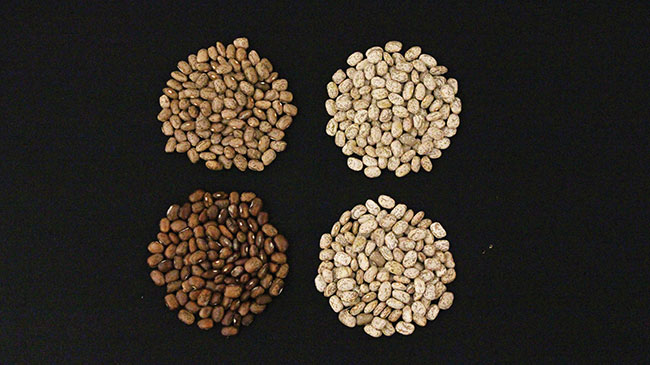 Most plant science research chugs along quietly for many years before major discoveries are announced and publicly heralded.

This was the case for Sangeeta Dhaubhadel, a plant molecular biologist/biochemist at Agriculture and Agri-Food Canada’s London Research and Development Centre in Ontario. Dhaubhadel recently discovered a gene that controls a slow-darkening trait in pinto beans. The discovery was years in the making and required the efforts of many people in labs around the country.

All pinto beans darken with age, and the older they get, the darker they become; this is called “post-harvest seed coat darkening.” There are two types of pinto beans: slow-darkening pinto beans darken more slowly after harvest, but these are less popular with producers due to their lack of agronomic traits like high yield and adaptability. Regular-darkening pinto beans have better agronomic traits, but their seed coats darken comparatively quickly post-harvest. It sounds innocuous, but regular-darkening can be a serious problem for producers.

Consumers tend to associate darker beans with longer cooking times, Dhaubhadel explains. But unless they’re stored in ideal conditions, pinto beans can start to darken after only six months post-harvest, she says.

“Older beans take longer to cook. So early darkening in pintos gives the impression of being old to consumers, who tend to avoid these beans,” she says.

Most of Dhaubhadel’s research portfolio focuses on soybean isoflavonoids, natural compounds produced in the plant that have human health benefits and can also be important for plants’ resistance to biotic and abiotic stresses.

She became interested in working with pinto beans when she realized that a different branch of the same molecular pathway that produces soybean isoflavonoids is responsible for pinto bean darkening. 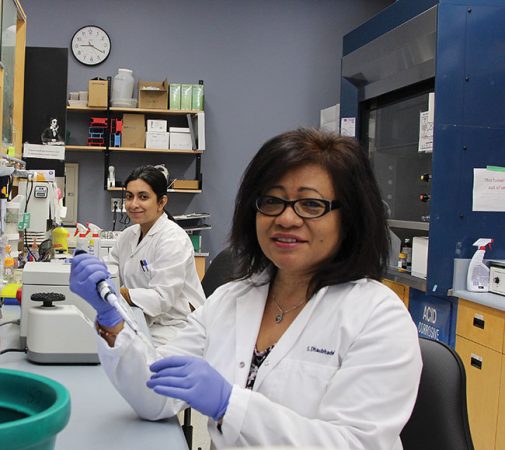 Dhaubhadel began working with University of Saskatchewan researcher Kirsten Bett to understand this process. In 2014, the common bean genome sequence was published, which made the work go faster.

A University of Saskatchewan study showed that the gene responsible for the darkening trait lies between two markers. Because the distance between the two markers could be very short or very long, Dhaubhadel and her PhD student Nishat Islam used the bean whole genome sequence to look for the markers, then examined the regions between and around the markers, looking for the gene.

Once they found the gene – called P for “pigment” – they characterized it to ensure it was indeed connected with seed coat darkening. Then, another study was published by another research team, showing how the gene worked in white beans, and this allowed Dhaubhadel and Islam to understand how the P gene influenced the speed of darkening.

“If this gene product is non-functional, then the colour becomes white. If it is fully functional, the seed coat turns brown faster. So the slow-darkening pintos have this gene, and it is functional, but there is one mismatch in the gene sequence that gives the protein reduced function,” Dhaubhadel explains. Reduced protein activity means less proanthocyanidin is produced in the seed coat.

Now that they’ve discovered the gene, Dhaubhadel and Islam are attempting to learn how it works in pinto beans versus other beans with similar post-harvest seed coat darkening issues – for example, cranberry beans.

It was a complicated study, according to Dhaubhadel, which wouldn’t have been successful without her lab’s collaborations – and the work of Islam. Sometimes, it takes a village to find a gene.