The time of a hail event is more important than the level of damage or use of recovery products. 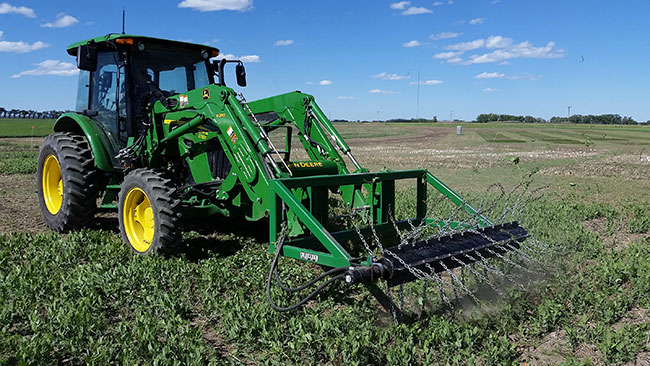 When the Great White Combine moves in, there is little anyone can do but take cover. But after the storm passes, farmers face difficult management decisions on what to do with what is left of the crop. Research in Alberta – otherwise known as the hail capital of Canada – sought to answer some of the commonly asked questions following a hailstorm.

“One of the main purposes of the research was to evaluate some of the hail rescue products that are promoted as a way to help a crop recover after a hail storm. Farmers are bombarded with sales information, and there are some ‘big fish’ stories about how great those products are,” says Ken Coles, general manager of Farming Smarter in Lethbridge, Alta.

Coles says a local farmer tried to conduct on-farm trials looking at hail recovery products, but the results were too variable, so small plot research trials were established. Building off of hail simulation studies at InnoTech in Vegreville, Alta., Farming Smarter first built a hail simulator that would mimic hail damage in a crop. The hail simulator consisted of a series of short chains attached to a rotating drum that was mounted on a front-end loader.

Farming Smarter worked with Alberta’s Agriculture Financial Services Corporation (AFSC) to ensure that the mechanical damage from the hail simulator closely resembled hail damage. With funding from Alberta Wheat Commission and Alberta Pulse Growers, Farming Smarter led a three-year study through the 2016 to 2018 growing seasons to assess crop recovery from hail damage, and if there were any agronomic or economic benefits from using hail recovery products after a hail storm. In addition to the Lethbridge site, InnoTech conducted research at Vegreville, and SARDA Ag Research in Falher, Alta., also participated in the trials.

The hail simulator was used to cause light (33 per cent) and heavy (67 per cent) defoliation at tillering, flag leaf and flowering in wheat. Similar levels of damage were simulated on pea at all three sites and dry beans at Lethbridge, at early four- to six-leaf, flowering and podding stages of the pulse crops.

Crop adjusters with the AFSC assisted with calibrating the hail simulators and by assessing actual crop damage on research trials.

In wheat, the nutrient recovery product used was Alpine G22 at three litres per acre (L/ac) plus boron and the fungicide was Prosaro at 320 millilitres per acre (mL/ac). In pea, ReLeaf Canola at two L/ac plus Boron Boost at 0.33 L/ac was applied, along with Headline fungicide at 0.16 L/ac. Bean foliar treatments included copper hydroxide (Parasol) as the fungicide/bactericide at two L/ac and Omex P3 at 0.25 L/ac. Crops were sprayed on average three days after hail damage. Check treatments were included for no hail damage, and no nutrient or fungicide applications. 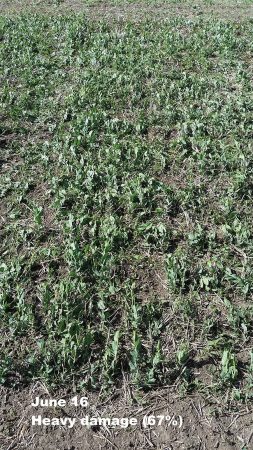 Peas were able to recover from early hail damage but not as well as wheat.

In all three crops, the biggest impact on crop yield was time of the hail event. In wheat, the undamaged check plots yielded 74 to 81 bushels per acre (bu/ac). Yield loss at the early damage timing was minimal, but increased as the season progressed. At the early damage timing, 33 per cent simulated hail damage resulted in a yield loss of three per cent (76 bu/ac), and 67 per cent damage resulted in yield loss of six per cent (73 bu/ac). However, yield losses were much higher at flag-leaf and flowering stages, ranging from 34 per cent up to 58 per cent yield losses.

Bean plants were affected by hail damage at each timing, however, the response varied between the two varieties at early timing. For Resolute beans, hail damage at vegetative plant stage produced a decreased yield as damage level increased. For Island beans, an increased yield occurred at light damage followed by a decrease at heavy damage. The increased yield at moderated damage was most obvious on fungicide treated plants. Coles says this suggests that application of fungicide/bactericide may help to improve plant recovery at early foliar stages. At flowering and seed stages, yield losses increased as hail damage intensity increased.

“As farmers, we get hung up on how much damage there is, but timing is much more important than the level of damage,” Coles says. “Once plants get to the reproductive stages, the plants won’t have time to recovery and yield losses become high.”

Overall, neither nutrient nor fungicide applications helped the crops recover after a simulated hail event. Coles says they could not conclude that a timely application may not result in a benefit. However, after nine site years of data, he believes the likelihood of a positive response is very low, as is a return on investment.

“If we had used the recovery products under a greater range of different conditions, we might have seen a better response. But based on what we saw, one out of nine site years with a yield response, that is too low to justify their use,” Coles says. “Farming is risk management and I would like to see responses at least 60 or 70 per cent of the time.”

“But based on what we saw, one out of nine site years with a yield response, that is too low to justify their use.”

Coles recognizes there are many more questions to consider following a hail event, including what level and timing a crop should be terminated, when a crop should be reseeded, or should the crop be harvested for feed.

“The chances of recovery from hail go down really quickly as the crop matures. It happens in a matter of weeks so we need more answers on what to do after a hail storm,” Coles says.