Features Other Crops
Intermediate wheatgrass as a dual-use crop

A major study is evaluating this perennial crop for both food grain and grazing in each year. 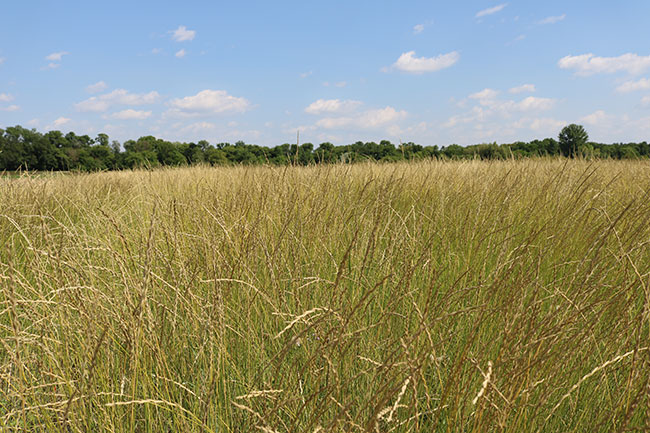 Intermediate wheatgrass has been grown as a forage grass in Western Canada for many decades. But in recent years, the University of Manitoba’s Doug Cattani has been developing the crop for Prairie grain production. Now, Cattani is co-leading a new multidisciplinary project to investigate the intriguing possibility of having both uses in a single year – harvesting the crop as a food grain, and then using the forage regrowth for high-quality, late-season cattle grazing. Theoretically, a producer could have two ways to earn income from an intermediate wheatgrass field, each year for multiple years.

Cattani’s perennial grain breeding research includes both cereal and broadleaf crops. In his perennial cereal work, he has experimented with perennial wheat and perennial cereal rye, but neither performed very well under Manitoba conditions. However, his intermediate wheatgrass (IWG) work could result in the release of Canada’s first commercial IWG grain variety within about six more years.

“Intermediate wheatgrass was one of the species I thought had the greatest chance of success as a perennial grain crop on the Prairies,” he says. “I’ve worked for many years in perennial grass seed production, so I had a good idea of the production system we would probably need to use for grain production. Also, forage breeders had previously selected intermediate wheatgrass for persistence in Western Canada, and several forage varieties [had already been] released by Agriculture and Agri-Food Canada and/or the University of Saskatchewan. So there was already some knowledge about it as a forage grass.”

Like other perennial crops, IWG has a long list of possible agro-ecosystem advantages compared to annual crops, such as reducing soil erosion and increasing soil organic matter. A perennial may enhance snow trapping to boost spring soil moisture, and there’s a living crop in place to take up that early moisture. Adding a perennial into a spring-seeded annual crop rotation may help break the growth cycles of the weed species that plague annual crops. And having some perennial fields reduces a grower’s spring seeding workload.

Adding a perennial into a spring-seeded annual crop rotation may help break the growth cycles of the weed species that plague annual crops.

Cattani also notes, “Once you get intermediate wheatgrass established, it will probably last for at least five to six years. So it provides growing-season-long green cover, which allows you to capture light and turn it into carbohydrates [over a longer period than an annual crop].”

At present, IWG has potential as a specialty grain, especially in marketplaces with an interest in enhancing environmental sustainability and ecosystem services. The Land Institute, a Kansas-based research organization, has been breeding IWG for grain since 2003, and its IWG grain, called Kernza, is starting to find a place in niche markets like craft beers and speciality breakfast cereal and pasta products. 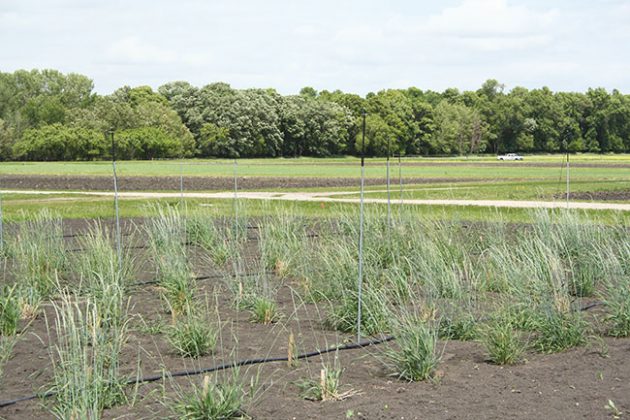 Cattani and his group are selecting intermediate wheatgrass lines for higher grain yields, adaptation to Prairie conditions, and other important traits. 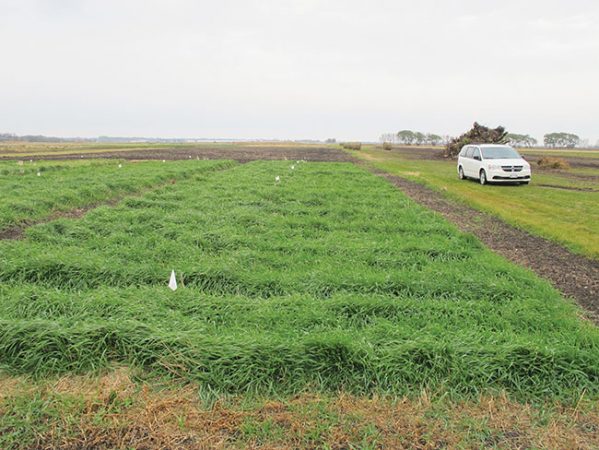 After the intermediate wheatgrass’s grain is harvested, the fall regrowth sets up next year’s grain yield.

IWG for grain: breeding and agronomics

Cattani and his research group are laying the groundwork for successful IWG grain production on the Prairies through both breeding and agronomic research.

Since 2011, they have been selecting IWG lines for adaptation to western Canadian weather conditions, higher grain yields, larger seed sizes, higher grain protein content and non-shattering seed heads, as well as other traits like disease resistance.

Currently, his most advanced lines are yielding about 30 bushels per acre under good growing conditions, with a bushel weight of about 40 pounds. A perennial crop tends to have lower grain yields than a similar annual crop because a perennial can’t put as much of its resources into seed production; it needs to put some reserves into maintaining itself into the next year. On the other hand, a perennial plant provides several years of grain production, with seeding costs only in the initial year.

From his experience in grass seed production, Cattani knew that most perennial grasses have higher seed production if you clip back the canopy immediately after seed harvest and then apply nitrogen fertilizer to improve fall regrowth. So Cattani and his group have managed their IWG nurseries, at Carman and Winnipeg, using this management strategy.

“That fall regrowth becomes the next year’s seed crop. So you want to get the crop to its best position before winter sets in, because that will dictate your seed head density, which is one of the most dominant of the seed yield components,” he explains.

Cattani and his group have been doing a number of agronomic studies since 2016. For example, they have assessed various post-harvest management practices, like comparing different fertilizer and residue management options, and they have tried interseeding IWG with different legumes.

They are currently working on a new IWG grain breeding and agronomics project. This three-year project is funded through the Canadian Agricultural Partnership (CAP).

Their breeding work under this project continues to develop lines with higher yields and better adaptation to Prairie conditions. Cattani notes, “This year we’re tweaking our most advanced line. Next year, we’ll put out our first breeders’ plots. Then, in another four or five years after that, we could have a commercial variety.”

In another component of this CAP project, four Manitoba producers will be growing Cattani’s most advanced IWG line for grain. He says, “Producers are applied researchers in a lot of ways. They try things out on their crops and see what the impact is, and they usually have a very good reason why they’re trying those things. I’m hoping these four growers will help in getting a better handle on things like the timing of fertilizer in the fall, or whether it helps to top up the fertilizer in the spring.”

“Producers are applied researchers in a lot of ways. They try things out on their crops and see what the impact is, and they usually have a very good reason why they’re trying those things.”

The project also includes a study to gain a deeper understanding of IWG’s growth stages. This phenological research will delve into the relationship between reproductive growth and factors like precipitation and temperature. The resulting information could help in predicting and enhancing the crop’s reproductive performance.

Dual-purpose IWG production could be an innovative way to improve the success of this crop. Cattani outlines how this production system would work: “You would harvest your grain crop, and then manage your stand for fall forage regrowth. Then, once you get the heavy frosts that really stop the growth, the cattle can graze the field. Next spring, you would manage it as a grain crop, harvest it, get it ready for fall regrowth, and at the end of the fall regrowth, graze it . . . and so on for multiple years. So each year, you’ll have two benefits: a cash crop from the grain and a forage crop for your cattle.”

IWG could work well in this dual-use system. “Intermediate wheatgrass seems to respond well to fertilizer and moisture after harvest. If we have a good or even a normal fall, we’ll get a fair bit of regrowth,” he says. “And because it is a perennial grass, it doesn’t produce seed heads at that point. So the regrowth will be predominantly leaves, which provide higher quality forage with more digestible nutrients than the stems. So we think intermediate wheatgrass can be a relatively high feed value pasture in the fall.”

This dual-purpose system has other advantages. Cattani notes, “Every day that the animal is out on the pasture and not in the barn, the producer saves money. And, by having the animals graze the crop, we’re adding nutrients back into the system. We’re hoping the stands will take up the nutrients returned by the animals and therefore will be more productive.”

Cattani and Emma McGeough, an animal scientist at the University of Manitoba, are the co-principal investigators for the dual-purpose project. The Natural Sciences and Engineering Research Council of Canada (NSERC) and Manitoba Beef Producers are the project’s main funders.

“This is a multi-faceted project with plant scientists, animal scientists, soil scientists, environmental scientists and economists. We want to look at it as holistically as possible, to get a snapshot of all the potential outcomes,” Cattani explains. The project team includes researchers from the University of Manitoba, Agriculture and Agri-Food Canada, University of Saskatchewan, Ducks Unlimited Canada, and The Land Institute.

“We’re establishing IWG this year for this three-year project. So next year, we’ll have our first grain harvest, then we’ll implement our post-harvest treatments, and then graze it in late October 2020. Then, we’ll evaluate the impacts of the grazing on the next grain harvest,” Cattani says.

In this project, Cattani and his plant science group are using his most advanced IWG grain line and comparing three treatments. “One treatment will involve our usual practices: harvest the grain, cut back the crop, fertilize it, and allow it to regrow into the fall,” he says.

“The second treatment is to interseed alsike clover with the perennial grain, seeding them both at the same time in the spring. Having a legume intermixed with intermediate wheatgrass should increase the forage value because of the higher protein content. In the past, we’ve tried growing IWG with other legumes. Alfalfa and sweet clover were too competitive with IWG if you didn’t fertilize it, and white clover wasn’t competitive enough. Alsike is in between white clover and the other two in terms of competitiveness.”

The third treatment is to just let the IWG grow after the grain harvest, without applying fertilizer or cutting back the stand.

Cattani’s plant science group will be measuring grain yields and analyzing the nutritional value of the forage regrowth samples, to compare the different treatments. The control treatment is a standard forage that they have grown before.

McGeough and her animal science research group will be evaluating such factors as cattle performance, grazing behaviour, forage intake, and methane emissions, for the different treatments.

A soil scientist will assess carbon and nitrogen cycling. Environmental scientists will investigate considerations like the greenhouse gas footprint and wildlife habitat potential. A crop modeller will evaluate IWG’s phenological development. And an economist will determine the profitability of both the grain and the cattle components.

“We’re trying to get a good assessment of not just the grain and cattle production, but also the effects on ecosystem services and the cost-effectiveness of the different practices. That should provide a good starting point for producers, giving them an understanding of the overall impact this dual-purpose crop may have on their production system.”

Cattani is hopeful that this novel research could eventually lead to a valuable opportunity for Prairie grain and cattle producers.