Quinoa, the ancient South American grain that’s been touted as a gluten-free superfood, is gaining popularity with Canadian farmers, but in commercial terms, it remains a small niche crop in this country. 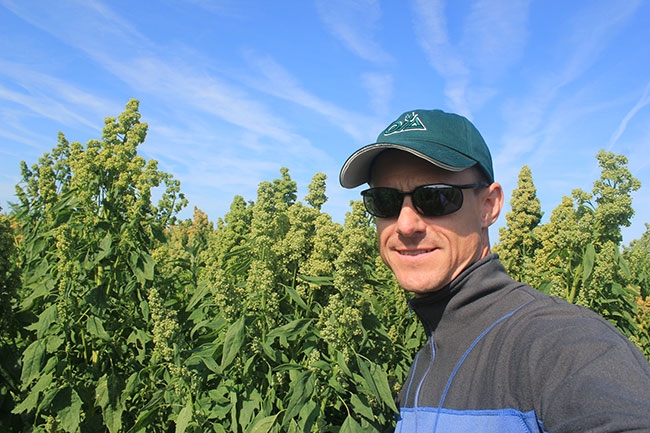 Draves started his quinoa campaign by spearheading a government-funded project to investigate whether quinoa could be grown and processed on a commercial scale in Ontario. Quinoa

Jamie Draves is among those who believe made-in-Canada quinoa has great potential for expansion, especially if varieties can be produced here that are better than the competition from South America.

In 2011, the Ontario health food entrepreneur, dissatisfied with what he considered the highly variable quality of imported quinoa, decided to try to make a go of producing quinoa commercially.

“My vision from the start has been the belief that with our soil conditions, our ag best practices, and by putting in a lot of research and development into finding the right varieties, we can provide the world’s leading quinoa with regard to nutrition,” Draves says.

There have been numerous challenges to overcome, but thanks to hard work and resolve – as well as a successful pitch on the CBC television show Dragons’ Den – the efforts of Draves and his team are paying off.

Draves started his quinoa campaign by spearheading a government-funded project to investigate whether quinoa could be grown and processed on a commercial scale in Ontario.

Test crops were encouraging, and in 2015 Draves walked away from Dragons’ Den with a $200,000 investment from West Coast restaurant magnate Vikram Vij to boost his brand of Canadian grown Quinta Quinoa.

“Vikram has been fantastic to work with,” says Draves, who is president and CEO of Katan Kitchens, the company that produces Quinta Quinoa. “He has incredible energy and positivity towards what we’re trying to do.”

In the years since, Draves has landed multiple retail deals and now has a production facility in place in Rockwood, Ont. He’s also been working on expanding quinoa acreage in Ontario and Western Canada in order to keep up with demand.

Quinta Quinoa first appeared on grocery store shelves in 2016 and the company continues to grow, with plans to eventually expand into export markets and through other sales channels.

Jump in quinoa consumption
Draves notes this decade has seen a big jump in interest in quinoa among Canadian consumers due to the gluten-free movement. Somewhere in the range of eight million kilograms of quinoa are imported into Canada each year, he says, adding that domestic production of the crop is tiny by comparison. “We’re nowhere near satisfying that market demand in Canada yet.”

According to Draves, quinoa is also being used more and more as an ingredient in health food products, such as granola bars and protein powders, due to its excellent nutritional qualities.

Draves believes that with Quinta Quinoa, he has achieved his goal of producing some of the highest quality quinoa in the world, with one of the highest nutritional values. “We are two to four times the nutrient and mineral value of any other quinoa on the market,” he says.

Quinta Quinoa varieties were developed over six years with the help of research partners from the University of Guelph and Trent University. Draves says third-party testing  through A&L Canada Labs and inspection and certification from NSF International has shown the varieties to be high in protein, fibre and zinc, an excellent source of iron and magnesium and a source of calcium.

Because quinoa can be a tricky crop (it likes warm days and cool nights and doesn’t do well when it’s too hot, wet or windy), there have been considerable challenges adapting the South American crop to North America.

One of these challenges is weed management. There are no approved weed control products for quinoa in Canada yet, so non-chemical methods typically have to be used.

“Weed pressure will really have an impact,” Draves says. “It’s something you need to monitor, just to make sure the crop is not getting overcome by weeds.” To prevent heavy weed competition, he adds, quinoa producers will sometimes need to implement weed control measures like in-row cultivation and hand weeding.

Draves maintains growers who can establish their quinoa early in a well-prepared field will find weeds less of an issue. Mechanical cultivation of weeds at the start of the season, as well as starting off with good, clean fields that have low weed pressure from previous years, are keys to preparation.

“You need to work your field early, make sure any weeds that are there don’t go to seed,” Draves says. “Quinoa is not a crop that you just plant and leave alone until harvest. We’ve had success with individuals who have managed their fields well, resulting in high yielding fields with minimal weed impact.”

This initial study did find quinoa capable of growing successfully in sandy loam or clay soils. It also indicated a high amount of organic matter was important, as well as a minimum of 250 millimetres of precipitation and average to good soil drainage.

Draves says research continues in this area. For example, Quinta Quinoa is currently conducting a three-year study into identifying agronomic parameters and suitable varieties for quinoa production in Western Canada. The project started last year and is being funded by the Saskatchewan government.

“There’s a lot of room to improve on this crop and we will continue to be committed to optimization and the best quinoa commercially available,” Draves says.

Draves started his quinoa campaign by spearheading a government-funded project to investigate whether quinoa could be grown and processed on a commercial scale in Ontario.

“We continue to push the envelope with all of our varieties,” he explains. “We have strong research partnerships with the University of Guelph, one of which is looking at non-GMO DNA information that will help us to continue to naturally breed our quinoa to make it more beneficial from a yield perspective for the growers, but then also have higher nutritional content for our consumers.”

Draves’ company has enlisted farmers in Ontario and the Prairie provinces to try their hand at growing Quinta Quinoa seed. Some are doing it because they’re interested in newer crops, while others are looking for more options to add to their rotations. As Draves puts it, to be a successful quinoa grower, “You have to be motivated to want to do something that’s a little bit different.”

Eric Leffers is among those willing to take a chance on quinoa. The Lethbridge, Alta., farmer became interested in the crop after watching Draves’ pitch on Dragons’ Den.

After contacting Draves, Leffers initially grew 10 acres of quinoa for Katan Kitchens in 2016. The yield was so good (a little over 900 kilograms per acre) that he decided to boost production to 80 acres this year.

“It did really well last year,” Leffers says. His farm, like others in the Lethbridge area, is irrigated and he thinks that’s had a lot to with his success so far with quinoa. He found good soil moisture is required after seeding quinoa, but then it’s important not to overwater. “It doesn’t like saturated soil,” he explains.

Additionally, Leffers, who also grows canola, wheat, flax and alfalfa, learned that quinoa is much like canola in terms of both its water and fertility requirements.

“You can fertilize it a lot, like canola,” he says. “It’s a high nitrogen user and we’re also finding that it likes phosphorus.”

This year, Draves says his company is concentrating a little more on upping its acreage “and focusing on a smaller number of producers than we have in the past, and that’s shaping up really well.”

As Draves points out, there is quite a bit of variability in terms of where quinoa can be grown successfully in Canada due to climatic restraints and other factors. He says Quinta Quinoa growers have generally fared well with yield and quality in southwestern and northeastern Ontario, while production efforts in southern Alberta have produced record yields.

Draves and his research partners are working on developing a better understanding of both the development stages and the phenological elements of quinoa production in order to hasten the process of breeding varieties tailored to different geographical areas.

This includes work soon to get underway that will utilize clustered regularly interspaced short palindromic repeats (CRISPR) technology to look at markers within the quinoa gene code that can inhibit the crop.

“This will allow us, from a non-GMO perspective, to better understand how we can naturally select these plants to then encourage some of these more favourable traits in the different areas,” Draves says. “Understanding the genome allows us to pick that best ‘one’ very quickly and early. That saves a lot of time in the process and produces a superior end result.”

Draves says his company plans to continue pushing the envelope with other crops for the health or functional food market.

“We’re not going to stop with quinoa,” he says. “Our whole objective is to produce …  premium commodity crops so that we can pass that premium down to the growers. Ultimately, we aim to continue to grow these markets and have a lot more producers involved in growing incredibly high nutrient superfood and functional foods in Canada.”

Manitoba Trials
Since 2014, the Manitoba government has been conducting ongoing quinoa variety evaluation trials in different areas of the province, including at the Canada-Manitoba Crop Diversification Centre (CMCDC) in Carberry, Man.

The CMCDC’s 2014 Annual Report contains some key agronomic information about quinoa production, including the following findings: