Installing thousands of feet of buried drainage pipes in fields has never been cheap, but it has been economical in a few circumstances, such as vegetable production. Now, more and more Prairie grain farmers are finding that tile drainage can make sense and benefit their fields, too.

So says Simon Knutson, co-founder and general manager of Northern Plains Drainage Systems, based in Carman, Manitoba. Knutson and business partner (and brother-in-law) Joel Classen both come from extensive drainage

backgrounds – before forming the partnership in January 2012, Knutson was producing topography maps for drainage and developing his own software. Classen was doing drainage installations and surveying.

As a software developer, Knutson developed the Precision Water Management Process that is now offered by Agri-Trend network geo-coaches in Canada and the United States. Most areas of Western Canada now have a geo-coach who can help with assessing the benefits of a tile drainage installation for specific fields.

Southern Manitoba has other tile drainage contractors around Winkler and Rosenort that operate closer to home and on larger projects, says Knutson. His company was installing tile in western Manitoba in 2012 and was working with relatively small projects, draining just a few acres at some locations.

“We’ve been involved in drainage for five years,” he notes. “Drainage systems in Saskatchewan are usually seasonal, built around potholes that load with water in spring. In Manitoba, tiling is on larger areas that have a high water table.”

Land values
A dramatic rise in farmland values has been underway for several years, long enough to change the balance on the economics of tile drainage. As well, mainstream crops like wheat, canola, soybeans and corn have been sustaining record high net returns for producers. And, very low interest rates have encouraged investments in land and land improvement.

“Tiling is becoming a more realistic option for a lot of land,” says Knutson. “People call us saying they’ve bought more land or want to improve the land they currently have. With land prices as they are, it’s making more and more sense to stick with the acres you have and improve them.”

If a Saskatchewan acre was worth $600 five or six years ago, it’s probably worth $1,200 today. However, potholes can downgrade the value on 20 percent of the field or more. They don’t get seeded if they’re too wet, or they get seeded and then drown out by early June.

“It’s costing you potentially $100 to $200 an acre every time you put in crop inputs and get nothing back,” says Knutson.

“And, you could be looking at losing another $150 an acre every year on the lost potential from that land. That’s what we’re hearing every day.”

In a single growing season, some growers can recover their investment cost. “People think now about spending $20,000 to $30,000 on a quarter [section] to really improve it. It doesn’t take long to repay that,” he says.

Nuts and bolts
Tile drainage pipe has been standard for decades. The plastic, perforated and corrugated pipe comes in rolls that vary from four-inch diameter with up to 4000 feet per roll to 12-inch pipe with roughly 330 feet per roll. Self-propelled drainage plows are being built, but the common choice today for growers is a pull-type plow. It takes one (and sometimes two) 400-horsepower (or more) tractors to pull these plows as they cut up to six feet deep to lay the pipe.

In practice, most farms now are choosing to buy a tile plow and train their own operator. The setup cost for the plow is about $50,000. It could be used for one or two seasons and resold, but it may stay on the farm for many years.

“Once they do a little they see how well it’s going to work, and they will probably want to keep doing it,” says Knutson of installing drainage tile. “People start with a mindset they are going to just target a few places, and it takes off when they see better yields. The potato industry has gone from targeting problem areas of fields to having everything tiled because it gives them better yields and better quality and less nuisance when they get to the harvest.”

Precision guidance for the heavy work requires an RTK GPS receiver that is mounted on the plow. The grade control system uses this input plus a slope sensor to maintain grade. A drainage design layout also can be loaded into the controller display to guide the operator, making sure the tile is installed in the correct locations.

Northern Plains can work with most RTK systems, but retails the Hemisphere/Outback A320 and A321 RTK GPS systems. For depth and grade control, it retails the Ag Leader Intellislope Grade Control software.

Most farms need a consultant to help with the mapping phase, even if they have the RTK equipment. “In theory, anybody who has an RTK system now can survey their own land,” notes Knutson. “Usually, we still need to take some survey shots in wet spots, and we need to know where the water is going to go, to make sure we can bring the tile out two to three feet deeper than the edge of the field.”

Most people struggle a little with the software. Northern Plains now offers drainage workshops throughout the year and can arrange for participation in one-week advanced courses in Ontario or the United States.

Expectations
Weather conditions and the type of tiling determine how much land can be tiled in a season. Tiling normally begins when the crop is off in late August or September. It can continue until the ground has several inches of frost.

Typical tile spacing is 50 feet. At that spacing, it normally takes 870 feet of tile to drain an acre. Realistically, for potholes, one farm can take on three to six quarters of drainage work in a season. In southwest Manitoba in 2012, one farm installed about a half-million feet of tile in the fall and placed an order for more.

For further information on tile drainage, growers can visit www.drainage.ag. 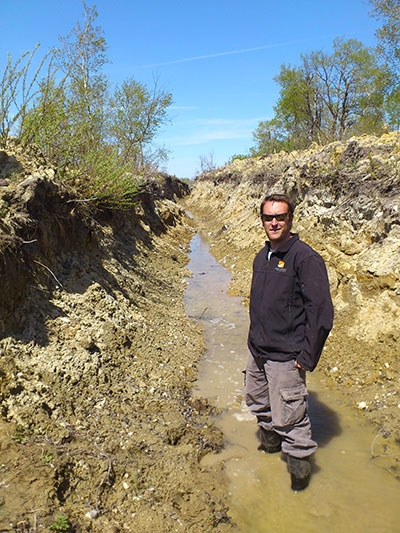 Simon Knutson surveys a potential outlet for a tile installation. Installing thousands of feet of buried drainage pipes in fields has never been cheap