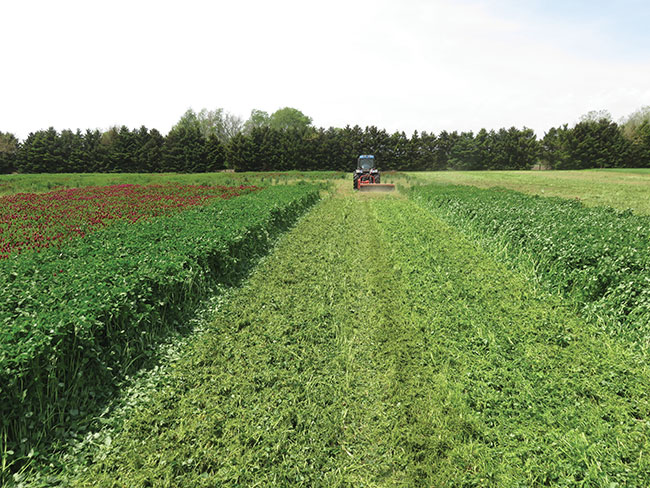 A new study out of Harrow Research Station has shown that the use of cover crops can dramatically reduce nitrogen (N) losses via leaching and enhance system productivity.

The study, which began in 2014, is led by Agriculture and Agri-Food Canada (AAFC) research scientist Xueming Yang and supported by AAFC’s Organic Science Cluster 3 program and the Grain Farmers of Ontario.

“My background is in soil science, looking for ways to enhance soil and environmental quality using the best farming practices,” Yang says. “This study targets a common rotation in southwestern Ontario around Lake Erie, winter wheat-corn-soy, because these systems can contribute to N leaching.”

“Substantial nitrate contamination of surface and ground waters is well-known in the region and agricultural soils are a major source of nitrates,” Yang says.

Approximately 95 per cent of residual soil N, mainly nitrates remaining in the soil at the end of the growing season, can be lost into waterways from the region’s sandy soils through over-winter leaching, eventually reaching the Great Lakes and widening anoxic zones.

In particular, it’s the winter wheat years that can most damaging. Winter wheat is harvested in mid- to late-July, and the soil is typically left bare after harvest, meaning more mineral N will be released from the decomposition of soil organic matter, further increasing residual soil N levels on those fields before the over-winter leaching period – and increasing the amount of nitrate loss.

In particular, it’s the winter wheat years that can most damaging.

Yang’s study, which is ongoing, looks at the potential for leguminous cover crops to help absorb excess N in the soil and contribute N nutrients to the following year’s corn crop.

There’s another reason why legume cover crops represent an elegant solution. In Canada, organic grain production doesn’t yet meet demand, but farmers transitioning from conventional to organic production must refrain from the use of chemical fertilizers, Yang says, which deters some farmers from making the switch.

While yields – particularly those of corn and other high-value crops – necessarily take a hit without chemical fertilizer, leguminous cover crops can provide a good source of N for the following year’s corn crop in rotation, mitigating losses and making the transition more feasible, Yang says.

Study plots were established at Harrow Research Station on a site previously planted to corn, winter wheat, soybean or white bean and alfalfa in rotation for at least six years treated with conventional fertilizers. 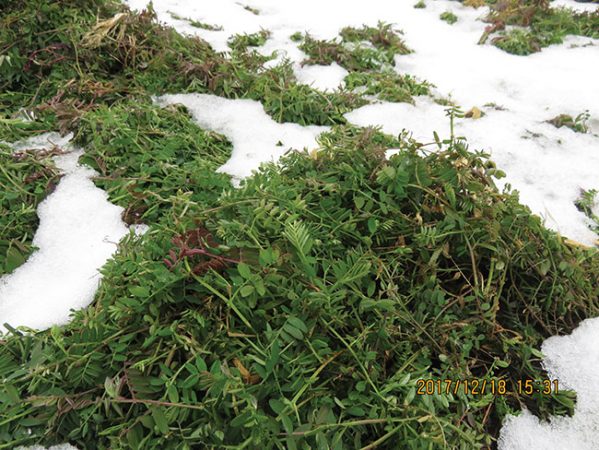 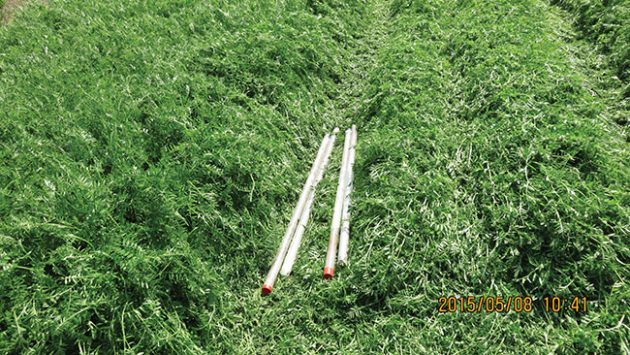 Field of hairy vetch before termination for planting corn.

Results and considerations for farmers

The team’s results were promising on all counts.

“Comparatively, the amounts of soil residual N subject to leaching loss from the cover crop treatments were really low, about 60 kg per hectare less than the conventional treatments,” says Yang. “So, since up to 99 per cent of residual soil N leaches during the winter from the study soil, from the N conservation standpoint, the use of cover crops really can reduce leaching.”

On the system productivity side, Yang’s results were equally positive.

“Your yields typically will be reduced significantly if crop N needs cannot be met,” Yang says.

Surprisingly, however, the study found that yield losses in the cover crop treatments were small from vetch and red clover treatments compared to the controls – “about five per cent less than conventional,” he says.

Surprisingly, however, the study found that yield losses in the cover crop treatments were small from vetch and red clover treatments compared to the controls – “about five per cent less than conventional,” he says.

Significantly, the use of leguminous cover crops doubled corn grain yield compared to the treatments without cover crops and synthetic fertilizers.

“We want first to let farmers know that this kind of leguminous cover crop after winter wheat can contribute N – not as much as conventional, but it can supply an adequate amount of N for the following year’s corn,” Yang says.

Even though all three cover crops are considered winter hardy, severe winter damage was noted some years in the crimson clover, which had impacts on biomass and N accumulation.

“Wherever possible, we recommend the use of cover crops instead of leaving the land bare, particularly after wheat harvest,” says Yang. “I recommend using hairy vetch, because it not only provides good land cover and sufficient N for the following crop, but it’s also easy to manage in-field in terms of ground-cover establishment, weed suppression and termination before planting the following crop,” Yang concludes.


Related
Winter wheat and cover crops for improved soil health
Will cover crops work for you?
Cover cropping to capture nitrogen
Cover your ground – and a lot more – between crops