The pathogen overwinters in corn and wheat debris and the spores infect corn plants during silking. Indeed, humidity and rain during silking is a huge factor in infection rates, and also temperature (the fungus likes 28 C best). One thing farmers can do to control Gibberella ear rot is avoid corn-corn or wheat-corn rotational patterns. But there are other things farmers should do, says Art Schaafsma, who has been studying the diseases since he arrived at the University of Guelph in 1987.

“After 1986, when there was a huge outbreak, we tried fungicides and we also noticed big differences in the hybrids,” recalls Schaafsma, a professor in the department of plant agriculture at the University of Guelph’s Ridgetown Campus.

“No hybrid has complete resistance and never will, but genetics are important. The turnover in hybrids was high then and it’s still high and we find this to some extent in wheat too. There’s a push and pull between breeding for yield and breeding for resistance. There are certainly corn hybrids highly susceptible to Gib that should not be grown.”

Gibberella ear rot was back with a vengeance in Ontario in 2006, and Schaafsma says it was because the high-yielding hybrids planted at that time had little resistance to the pathogen.

“A good year for yield is a good year for Gib, especially in Ontario,” he notes. “If you needed to locate a bullseye for the disease on a map of North America, it’s southwestern Ontario. In 2006, the problem spilled over into Indiana and other states and the seed companies took notice. They re-examined genetics and weeded out families of hybrids with high susceptibility.”

Infection control
The window of infection at silking is very narrow, with individual ears susceptible for only about 24 hours. However, Schaafsma notes that with silking happening at different times in different plants in the stand, the total infection time can be a week – and the weather during that week obviously matters. The more days with heavy rain or thunderstorms at the silking stage, the worse the infection risk.

Silking aside, corn can also be infected through wounds in the ear from insect damage (or hail), and earlier damage is worse. European corn borer used to be a big factor in boosting Gibberella incidence in Ontario, but Bt corn hybrids virtually wiped that pest out. However, Western bean cutworm has risen to prominence in its stead and 2014 saw large amounts of Gibberella infection through damage from that pest.

“That year was a huge surprise in the amount of Gib and resulting DON mycotoxin,” Schaafsma says. “Most of the infection was not from the pathogen moving down the silk, but through damaged ears.”

He notes that Syngenta Viptera hybrids have been effective in controlling Western bean cutworm but now resistance to the Herculex gene is becoming apparent. Insecticides are also important in its management, with Coragen and Matador 120EC providing good control with precisely timed foliar application.

Jocelyn Smith, a PhD student in Schaafsma’s department, has been studying the roles of hybrids, insecticides and fungicides in Gibberella control. “Rate timing and testing different products is important,” Schaafsma says. “Smith’s work will give us a wealth of information about that, and it’s also becoming apparent from her work how little damage from insects results in the toxin.”

At this point, Schaafsma and his colleagues advise producers to use a tank mix of Coragen and fungicide. “With fungicide alone, we can only get a 15 per cent reduction in toxin. But with hybrids that have more resistance, combined with fungicide and insecticide, you can expect 70 to 80 per cent reduction of what you would have had through applying nothing.”

Fungicide application
Research results show fungicides Proline and Caramba to be equally effective. Schaafsma also notes that strobilurin fungicides are to be avoided in both wheat and corn for Gibberella control, even when mixed, as their application may result in more toxin than if you didn’t spray. Both Proline and Caramba also control corn leaf diseases such as rust, Northern corn leaf blight, grey leaf spot and eyespot.

However, in Schaafsma’s view it’s critical that these fungicides are applied only just after tasseling time – if corn prices are low. “The best timing is when the silks first start to brown,” he explains. “Gib is a weak pathogen and cannot colonize a healthy silk, and doesn’t do well on dead silk, but as the silk is dying, it can infect. So you want to spray on the silks just as they’re turning brown and exposed, two to three days after tassel. Better to apply a little earlier rather than later, so watch the weather.”

He notes that many farmers think the corn is too tall to spray after tasseling, but says, “I’ve done it with my own corn and it’s fine. It didn’t affect yield.” He adds that it’s easier to do it by air at that point, but more expensive, and spraying with a ground rig does a better job anyway.

In terms of overall Gib control plans, Schaafsma advises picking a hybrid with highest yield potential but that also has some resistance to Fusarium, managing Western bean cutworm with insecticide and saving your fungicide for silking time.

“In southwestern Ontario, you cannot afford to neglect DON, as you’ll get dinged when you sell your corn,” he concludes. “A lot of people worry about leaf diseases and forget about the DON. The ethanol plant is not a dumping ground for poor-quality grain and we learned that the hard way in 2006.”

Growers may also want to do an earlier spray for leaf diseases, but that depends on the price of corn.

“The more money you get with your corn, the more you can spend to get the extra few bushels,” Schaafsma notes, “but you can only afford to spray fungicide once a year with low corn prices, and if you spray early, you’ll have a false sense of security.

“The rain during silking can happen, so reserve your fungicide for after tassel. You will still get a lot of leaf diseases but you’ll have less DON in your grain.” 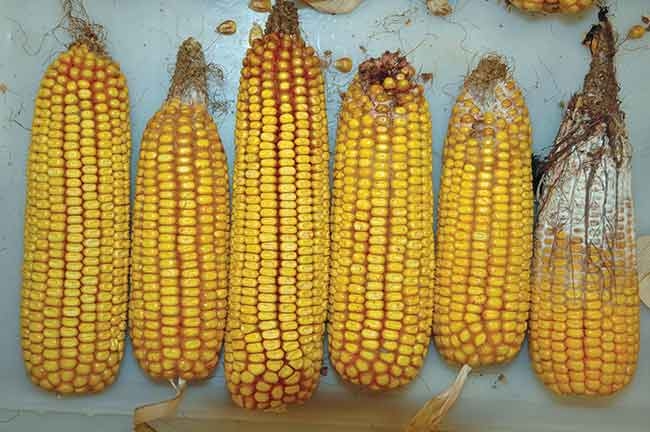