The most common and important ear mould in Ontario is Gibberella zeae, which is the sexual reproductive stage of Fusarium graminearium. Infection often begins at the ear tip, and although the fungus can produce a white-coloured mould that makes it difficult to tell apart from Fusarium Kernel Rot, the two can be distinguished easily when Gibberella produces its characteristic red or pink colour mould. Toxins produced by Gibberella include deoxynivalenol (DON), zearalenone (ZEN) and T-2 toxin. “Hybrid differences, previous crops, localized
weather patterns, insect or bird damage and planting date effects can all impact the level of mould in a given field – and can explain why fields in close proximity have different mould development,” says Albert Tenuta, a field crop plant pathologist with the Ontario Ministry of Agriculture, Food and Rural Affairs.

As more farmers are choosing to use earlier planting and later harvests, it’s important to ask whether these practices increase the threat of gibberella infections. Pioneer Hi-Bred’s Dr. Steven King doesn’t think so. “I think the biggest risk factor in any season is humid weather around flowering time,” he says. King notes that the environments where later-maturing hybrids can be grown (Middlesex, Lambton, Kent, Essex) carry a higher probability of having conditions conducive to infection and proliferation during silking and early grain filling; high-risk environments are nestled between bodies of water (Lake Huron, Lake St. Clair, Lake Erie). Dr. Victor Limay-Rios agrees that silking time is an important stage for fungal infection. “We have also found that DON levels tend to be higher in varieties planted later in the season,” says the research associate in the department of plant agriculture at the University of Guelph, Ridgetown Campus.

Limay-Rios has also found a relationship between corn damaged by Western bean cutworm (WBC) and DON levels in Bt corn (by feeding on corn ears, WBC allows mould entry). “There are some indications that increasing infestations of WBC may be increasing gibberella infection prevalence,” he says. Limay-Rios is working with Dr. Art Schaafsma and entomologist Jocelyn Smith to investigate the control of WBC by different Bt corn products on the market as well as grain quality and mycotoxin incidence from ear moulds in the presence of this insect pest.

As chemical and biological control of the pathogen is limited, the main focus in fighting gibberella is on breeding hybrids with low susceptibility. “It’s a key trait for our company,” says King. “We’ve decreased susceptibility in our hybrids a great deal. With the big outbreak in 2006, we learned a lot and validated a lot of breeding information.” King points out that with this mould, “you can have a little that you can see on the ear, but a lot of mycotoxin could be present in the kernels, so it’s important to go beyond visual tests and include screening for toxin levels.” He says there is a good range of tolerance in Pioneer’s lineup, particularly for hybrids suitable for areas greater than 2800 heat units that feature the cool nights and misty mornings preferable to the mould.

Syngenta Canada agronomic sales manager Shawn Brenneman says his company uses a two-pronged breeding approach – genetics related to low susceptibility, as well as introduced traits that help control pests such as the WBC. “Insect damage is definitely a significant infection factor,” he says. “Our broad-spectrum insect control trait, Agrisure Viptera, offers almost 100 percent WBC control, with good control of other ear-feeding insects such as Corn Earworm.” The trait is found in about 25 percent of all Syngenta hybrid offerings, and in at least one hybrid in each maturity group. “Our extensive field research shows that Agrisure Viptera can provide over 80 percent reduction of mycotoxins where insect infestations are prevalent,” Brenneman notes.

Public breeding efforts
Dr. Lana Reid at Agriculture and Agri-Food Canada (AAFC) in Ottawa has been doing breeding work on lowering gibberella susceptibility for 20 years. “We’ve been collecting inbreds from around the world in the hopes of getting some that show different sources of resistance, and we’ve found a few,” she says. “There are different genes that provide plants with defence against each mode of infection – either through silk or through kernel wounds – and it’s important to look at both. There are debates about whether one mode of infection is more of a threat than the other, so we want to cover both bases.”

In 2009, Reid and her team released CO441, which of all the eight inbreds AAFC has released in the past two decades with improved gibberella resistance, performs best. “CO441 shows resistance to both infection modes and it’s a challenge to produce an inbred with both,” she notes. “Because of this, CO441 is used to create new resistance corn inbreds and hybrids around the world.”

Reid adds, “We’ll most likely release a ninth inbred this year (2012) and we hope it will demonstrate the resistance of CO441, but with better yield when in hybrid form.” In collaboration with many other researchers around the globe, Reid is attempting to understand how CO441 is able to fend off infection. Reid is part of a large team of AAFC scientists working on gibberella ear rot in corn and head blight in wheat, barley and oats (also caused by gibberella). In corn, Dr. Linda Harris is mapping gibberella ear rot resistance genes, and Dr. Jas Singh is working on inserting new genes for resistance into corn inbreds. Several other scientists are researching the fungus itself and the toxins it produces.

Reid and her colleagues have developed a standardized field screening technique as well, that can be used in research and breeding. “It involves standardized timing and amount of inoculation that should be used in the field, and has been used in routine screening of large sets of inbreds and commercial hybrids,” she says. Reid and Dr. Art Schaafsma used to do large hybrid screenings in the mid-1990s, but most of the hybrids were found to be highly susceptible.

Limay-Rios notes that such a procedure is imperative for meaningful hybrid evaluation. “Without doing a large standardized trial, comparing different hybrids from different companies is almost impossible,” he says. “We need funding and the willingness of companies to participate for this to move forward. Information on hybrid resistance also helps us with DON-cast, our pre-harvest forecasting model for this disease.” Reid wholeheartedly agrees. “It is imperative that a screening of today’s commercial hybrids be conducted,” she says. Only Pioneer and Maizex have offered hybrids for Limay-Rios’ small-scale misting trials. For its part, Brenneman says Syngenta Canada “would definitely participate” in a large-scale trial. 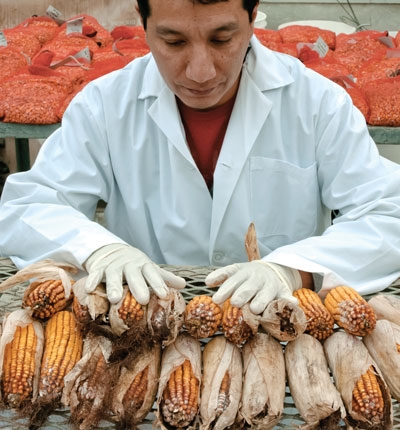 Comparing hybrids from different companies is important to fight resistance says Dr. Victor Limay-Rios The most common and important ear mould in Ontario is Gibberella zeae
Print this page