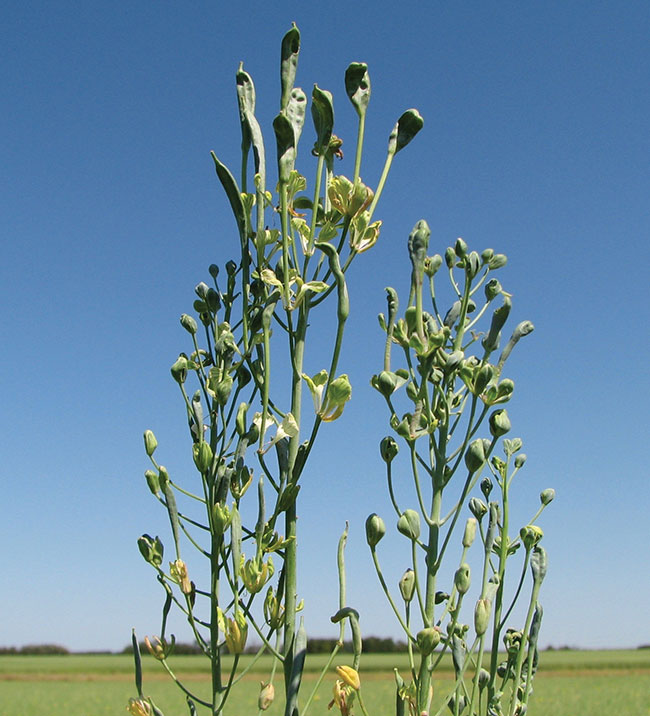 When you hear “aster yellows,” your mind may instantly flash back to 2012, when 77 per cent of the canola fields in Saskatchewan showed symptoms of the disease, and yield loss was estimated at eight per cent. But what if there was a way to get a head’s up on this disease? A team of scientists is working to develop a prediction tool by creating the very first Rapid Aster Yellows (RAY) warning system for Western Canada.

Tyler Wist, research scientist at Agriculture and Agri-Food Canada in Saskatoon, is leading this project and explains the importance of an early warning system for growers.

“Being able to rapidly determine the percentage of infected aster leafhoppers in the initial leafhopper migration means that growers can assess their own aster yellows risk. Also, if we can determine which growing region of the United States produces large populations of infected leafhoppers each year, we will know that when the winds originate from those locations, we should be vigilant in our fields.”

Aster yellows is caused by a phytoplasma, a specialized bacterium vectored primarily by the aster, or six-spotted, leafhopper (Macrosteles quadrilineatus). In aster yellows-infected canola, flowers are replaced by leaf-like structures, pods are bladder-like and hollow, and any seeds that do form are misshapen and immature. Aster yellows can also affect cereals, flax, mustard, potato, camelina, coriander, caraway, garlic, and many vegetable crops including carrots, lettuce, and celery.

The spread of aster yellows on the Prairies initially begins from infected migrant aster leafhoppers, particularly those that arrive on southerly winds in May. By collecting and testing these migrant leafhoppers, scientists are trying to determine where they originate from in order to better understand the wind patterns that bring them here in the first place. But pinning down the birthplace of a four-millimetre long insect blown in from a few thousand kilometres away is not an easy task. 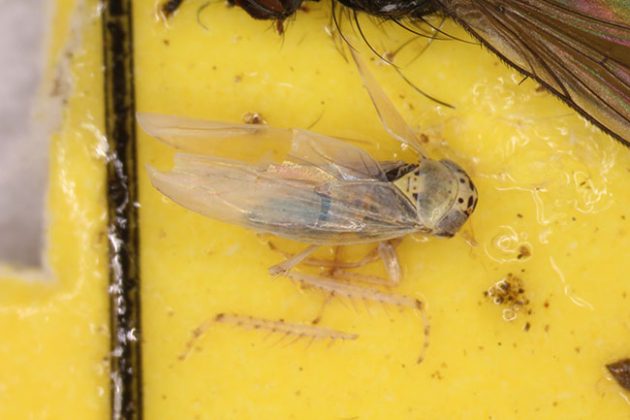 Yellow sticky cards can be placed in fields to detect leafhoppers. Photo courtesy of AAFC Saskatoon.

Molecular barcoding involves comparing the DNA of the migrant aster leafhoppers collected from the Prairies with aster leafhopper DNA from key leafhopper regions in the United States. However, using the traditional barcoding methods has had its difficulties.

“Barcoding showed promise in initial tests, but when we compared the typical CO1 barcoding target site and one additional site, our migrant aster leafhoppers were too similar at these two DNA regions to aster leafhopper populations all across the U.S. So, unfortunately, we can’t actually tell the locations of the migrant leafhoppers from just these two regions of DNA, as we’ve recently discovered,” Wist explains. “Using differences in the CO1 DNA barcoding region has worked to determine origins of other insects that invade Canada, like diamondback moth and pepper weevil, so it was not a dead-end road to try, except that we hit a dead end with the leafhoppers.”

Instead, a different DNA technique had to be developed for aster leafhoppers. Karolina Pusz-Bochenska, a PhD candidate at the University of Saskatchewan working with Wist on the project, in collaboration with Steve Bogdanowicz of Cornell University, created an aster leafhopper “DNA microsatelliate library” made up of hundreds of potential DNA sites to be used for comparison. Now, Pusz-Bochenska and Wist are collaborating with colleagues across the United States to get aster leafhopper samples sent to them for this comparison work.

The second technique being tested to determine leafhopper origins is stable isotope analysis. Isotopes are different forms of a single element that have a nucleus with the same number of protons but differing numbers of neutrons. “Stable” means the isotope nucleus will not decay, as opposed to an unstable (i.e. radioactive) isotope that will. For example, hydrogen (H) has three isotopes that occur in nature, two of which are stable (1H and 2H), while the third (3H) will break down after a number of years. Pusz-Bochenska has been analyzing the hydrogen-2, or deuterium, isotope ratios in migrant aster leafhoppers through collaboration with Keith Hobson of Western University in Ontario.

“The hydrogen molecules from water (H2O) get put into the wing and leg cells of the leafhoppers. Because the water consumed by the leafhoppers is in the environment they developed in, we can analyze the hydrogen isotopes of these migrant leafhoppers to determine the latitude of where they came from,” she says.

While using stable isotopes to study animal migration is not entirely new – it has been used for certain insects such as monarch butterflies and dragonflies, as well as songbirds and bats – the isotope ratios for leafhoppers have not yet been correlated. Pusz-Bochenska explains that using this concept for insects like dragonflies is much easier since they already have part of their life cycle in the water, as opposed to a leafhopper that is just ingesting water via plants in the environment.

The third component in determining the origin of the migrant leafhoppers is to study southern wind trajectories. By using wind data generated by Environment Canada, researchers at Agriculture and Agri-Food Canada can track winds crossing into the Prairies up to five days before they arrive. Wist’s group hopes to ground-truth these wind trajectories by sampling for leafhoppers before and after the winds blow through.

In the end, the molecular barcoding, stable isotope, and wind trajectory data will all be combined into a single model to pinpoint where the leafhoppers are coming from. 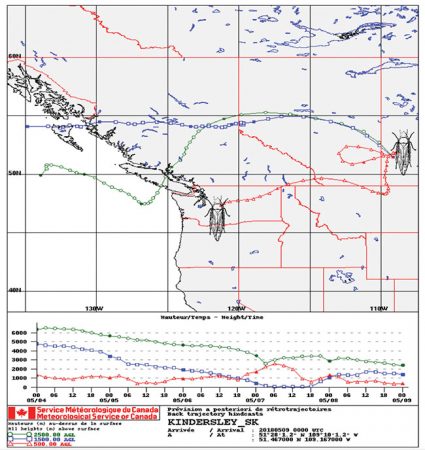 Using reverse wind trajectories, scientists were able to track aster leafhoppers that arrived in Moose Jaw, Sask. in early May 2018 back to their origin in Washington. Photo courtesy of Tyler Wist.

Predicting disease incidence and putting it all together

Once the leafhoppers are detected on the Prairies, either through sweep sampling or on sticky cards placed in fields, they need to be tested to determine if they are carrying the aster yellows phytoplasma. Tim Dumonceaux, research scientist at Agriculture and Agri-Food Canada in Saskatoon, has developed an improved aster yellows diagnostic test to do just that. The test determines the percentage of leafhoppers infected, and this percentage multiplied by the number of aster leafhoppers gives an “aster yellows index,” which describes the risk of aster yellows disease transmission in that leafhopper migration. Dumonceaux’s new test produces results in one hour, instead of two to four days with the previous PCR test, and can be conducted in the field if necessary. By combining the aster yellows index with spring temperature and moisture data, the amount of aster yellows disease expected to occur will be estimated.

Once the scientists understand where the migrant leafhoppers are coming from, study the winds that brings them here, determine how infective the leafhoppers are, and know what the potential for disease development is, then the RAY warning system can be implemented. Several methods to distribute the aster yellows alerts to growers and agronomists will be explored, but Canola Watch and the Prairie Pest Monitoring Network blog are two established avenues that have been employed so far.

The past two years of data collection have found low percentages of infected leafhoppers, which has correlated well with the low levels of aster yellows in canola crops reported in the annual disease surveys by the Saskatchewan Ministry of Agriculture. Wist was able to track one particular leafhopper migration to Saskatchewan that occurred in spring of 2018 originating from Washington around the time that their lettuce harvest was underway. Fortunately, not many of the arriving leafhoppers carried the aster yellows phytoplasma.

“We are still working out 2019’s patterns, but the initial aster leafhoppers that arrived were not very infected again this year and we think that fact will be reflected in low levels of aster yellows disease in canola crops at harvest time this year,” Wist says.

Wist hopes that through this project, the migration patterns of pest insects into Western Canada, such as aster leafhoppers, diamondback moths and aphids, can be better understood and predicted for the benefit of all growers.