By now, aster yellows phytoplasma has received its fair amount of attention, and although the disease occurs sporadically, and has been studied around the world, there are still many unanswered questions. How can it be controlled? How can it be predicted? Can spraying leafhoppers prevent infection? Will it be back in 2013?

“Phytoplasmas are interesting to study. We don’t know how to grow them or how they reproduce, but we do know how to identify them and how they are spread,” says Chrystel Olivier, an entomologist with Agriculture and Agri-Food Canada (AAFC) at the Saskatoon Research Centre.

Aster yellows 101
Aster yellows is a phytoplasma organism. Phytoplasmas are specialized wall-less bacteria that are parasites known to multiply only in plant phloem tissue and insect vectors. Sap-sucking insects carry aster yellows, and these infected insects spread infection by moving and feeding from plant to plant. Olivier says seven different phytoplasma groups have been identified in Canada, with aster yellows the most common and widespread. 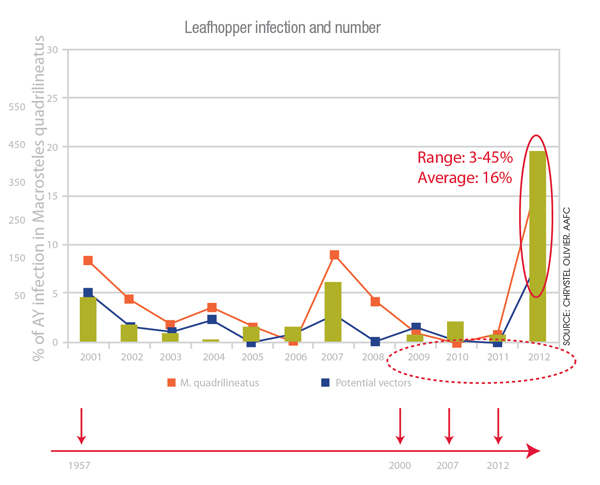 The aster leafhopper (Macrosteles quadrilineatus) is the primary carrier of aster yellows, although the leafhopper species (Amplicephalus inimicus) is also an important AY vector in cereals. Aster yellows can only survive inside plant or insect hosts. Most aster yellows infections arrive with infected leafhoppers originating on winds from the southeastern and central United States. Few leafhoppers can overwinter in Canada.

The aster leafhopper feeds on many crops including canola, camelina, flax, cereals, herbs and spices, pea, chickpea, sunflower, alfalfa and bromegrass. Worldwide, as many as 30 insect species, though, can transmit the disease to a wide range of host plant species.

“Infected perennial plants are a strong disease reservoir,” says Olivier, who adds they don’t know the extent of the reservoir on the Prairies.

Aster yellows has also been detected in the seeds from infected B. rapa and B. napus canola plants, but when these seeds were planted, the phytoplasma was not found in the growing plant. Researchers are not sure why the disease does not develop from infected seed.

Polymerase chain reaction (PCR) tests done at AAFC’s Saskatoon Research Centre in 2013 on canola seeds found phytoplasma DNA in approximately eight percent of seed tested. During a monitoring period from 2002 through 2005, that level was less than one percent, highlighting how much more widespread and impactful the disease was in 2013.

In canola, infected plants show a number of symptoms, including chlorosis, stunting and poor growth. A common, widespread symptom in 2012 was sterile, bladder-like pods and small witches’-broom flower heads. Infection can cause poor seed set and poor seed development with shrivelled and shrunken seed.

In cereals, the symptoms include yellowing leaves, shrivelled heads with distorted awns or floral parts that look like leaves. The disease looks very similar to barley yellow dwarf virus, and the only way to differentiate it is to use a PCR test to detect the phytoplasma DNA. 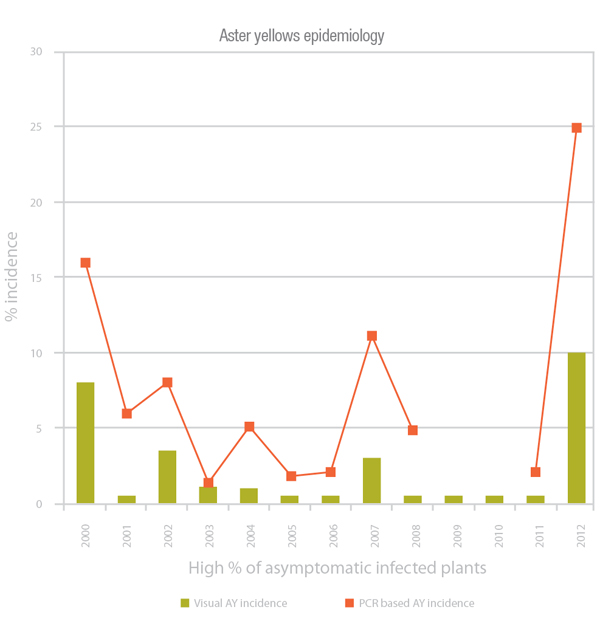 What was learned in 2012?
Like other years with high aster yellows infections, 2012 followed a typical pattern. Early winds brought the aster leafhopper to the Prairies in early spring. The presence of the aster leafhopper was directly correlated to the outbreaks in 1957, 2001, 2007 and 2012. However, the number of aster leafhoppers infected by the mycoplasma was much higher in 2012 than in previous outbreaks.

In 2012, the range of aster yellows infection in aster leafhoppers at survey sites across the Prairies extended from three to 45 percent, with an average of 16 percent. In some cases, 20 sweeps would capture up to 500 leafhoppers – a very high number. Normally in any given year, only about one to four percent of leafhoppers carry aster yellows phytoplasma.

“The wind patterns are different at each site, so the levels of infection are variable as well,” notes Olivier. She says researchers can look for visual symptoms, or do a PCR test to determine incidence. The PCR test produces a higher incidence percentage. In canola samples in some fields in 2012, incidence based on visual symptoms was around 10 percent while the PCR tests found an incidence of 25 percent.

“A very high percentage of plants can be infected but do not show any symptoms,” explains Olivier.

Camelina had a higher incidence level with almost 50 percent incidence in the PCR tests and about 40 percent incidence based on visual symptoms. On cereals, preliminary PCR tests in 2012 found barley infection rates at approximately 25 percent, oats at 17 percent and wheat around five percent. Visual symptoms are difficult to correlate to aster yellows, so no visual estimation of incidence was made in cereals.

Yield losses in 2012 were much higher than in other outbreak years. Research from 2001 through 2005 harvested canola seed from aster yellows-infected plants. Normal-looking seed was separated form shrivelled, misshapen seed. In these years, 30 to 60 percent of seeds from infected plants were small and shrivelled. Often, these light seeds are blown out the back of the combine. If one infected plant produces 30 to 70 percent misshapen seeds, a 0.3 to 0.7 percent yield loss for every one percent incidence of aster yellows in your field could historically be expected.

However in 2012, based on observations made at the AAFC farm and in several fields, roughly 10 percent of the canola plants had no seeds and 20 to 25 percent of the symptomatic plants contained mostly shrivelled seeds. The rest of the AY-infected plants had a mixture of normal-looking seeds and shrivelled seeds. The old yield loss rule of thumb may not have applied in 2012, but even using the old rule of thumb researchers would have estimated a three to seven percent yield loss. What the real yield loss in 2012 was is only a guess.

Is 2013 another year of concern?
As Olivier pointed out, southern winds are arriving earlier and they are well correlated with aster yellows outbreaks of 2012 and 2007. In addition, warmer winters may mean higher survival of phytoplasmas in perennial plants, and greater numbers of overwintered leafhopper adults.

“We can’t predict the wind, but one clue is when the southern winds carrying the leafhoppers arrive,” says Olivier. “During the past five years, the first southern winds started in April, rather than May and June. This means the inoculum is coming earlier and warmer winters induce a higher probability of survival of the phytoplasma.”

Earlier arrival also means more opportunity for leafhoppers to multiply and spread the infection from plant to plant. In 2013, with the possibility of a higher than normal inoculum carryover in perennial weeds from the heavy infestations in plants in 2012, early arrival may result in a rebound of the disease – but that is very much dependent on the winds and weather in the spring.

Control is not yet possible
One approach kicked around is whether controlling the insect vectors will control aster yellows infections. Unfortunately, insecticidal control of leafhoppers is impractical, as the leafhoppers can arrive on several waves of southerly winds, requiring several spray applications. In addition, insecticide applications would have to be based on the expectation that the leafhoppers would infect plants, as there is a two- to six-week period between plant infection and symptom development in canola.

“When symptoms are observed, it is too late to spray,” says Olivier. “And the insecticide applications would have a negative impact on beneficial insects as well.”

Currently, no varieties are resistant to aster yellows. Some small plot screening has been done for resistance, and some lines may be a little less susceptible. However, Olivier cautions that the differences might just be differences in leafhopper pressure in the plots.

Weed management may help to minimize the disease. Weed abundance and diversity favours leafhopper populations, and could result in greater levels of disease transmission. Controlling perennial weeds can also help reduce the carryover of phytoplasma infection from year to year.

“There are many unknowns,” says Olivier. “Phytoplasmas are difficult to study and to control.  There aren’t a lot of solutions.” 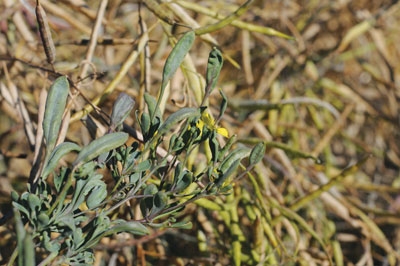 Typical bladder-like pods caused by aster yellows. Although the disease occurs sporadically and has been studied around the world