Tips to help manage the spread. 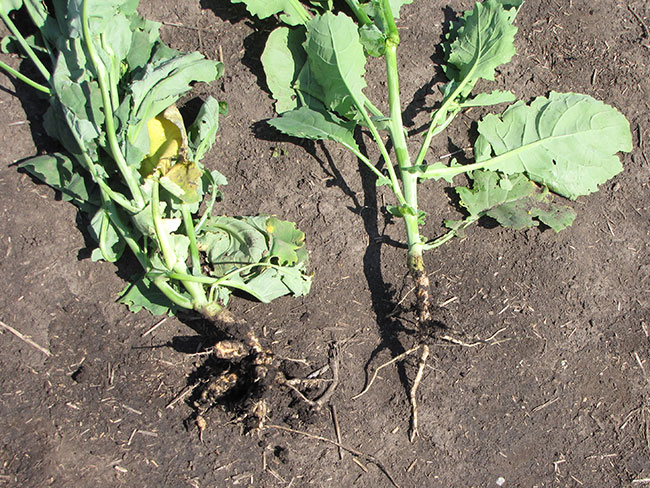 When first noticed from the seat of a swather, a little, insidious patch of premature ripening of canola is often the first sign of clubroot disease in a canola field. Growers in Alberta are well acquainted with the disease, which was first discovered there in 2003 and now spread widely across the province. The disease is slowing making its way east – but there’s hope. For growers in Manitoba and Saskatchewan, much can be learned from research conducted in Alberta in the last 15 years.

“For a field where clubroot is first seen in a small patch, there may be a chance to manage the disease in this small area,” says Bruce Gossen, plant pathologist with Agriculture and Agri-Food Canada in Saskatoon. He emphasizes that agronomists and farmers should be actively looking for clubroot, and aggressively manage it when found in small patches.

Where to look for clubroot

Clubroot mainly attacks Brassica species and causes stunting, delayed maturity, yield loss and plant death. The disease spreads through the movement of resting spores, which are long-lived and number in the millions to billions in severely clubrooted galls. These resting spores can move with blowing dirt or water erosion, but primarily by transport on vehicles, equipment, industrial activity or footwear.

Gossen asked University of Alberta clubroot researcher Victor Manolii for the top 10 locations that clubroot is most likely to be found first. The most obvious was in spreading patches of stunted and dying plants.

The next most obvious place is at the main entrance of a field, where dirt from other fields often falls off equipment or vehicles. Stephen Strelkov, plant pathologist at the University of Alberta, looked at the pattern of clubroot occurrence in clubroot-infested fields in Alberta. At field entrances, clubroot was found 90 per cent of the time. Moving 150 metres out into the field, the left edge had clubroot 39 per cent of the time, the right edge 48 per cent and the middle around 32 per cent.

“A farmer explained to me that when he moves equipment onto a field, he turns right because the right side of the tractor is where the hydraulics are and he can watch the equipment as it comes down,” Gossen says. “That might explain why clubroot occurrence is higher on the right-hand side of the field entrance.”

The next four locations are other entrances like a yard, highway, bridge, and other secondary field access points. Number seven is temporary streams or drainage where spores can be transported by water. Around field grain bins is another location, along with power lines, pipelines and oil sites. Low areas of the field such as sloughs, where water ponds, can also be a catchment area for spores.

The next four locations are other entrances like a yard, highway, bridge, and other secondary field access points. Number seven is temporary streams or drainage where spores can be transported by water.

“In Manitoba, clubroot is showing up first in low areas of the field, rather than at field entrances, which is different than in Alberta. The spread of the disease may be happening differently in Manitoba, but I suspect that, over time, field entrances will be an important source of clubroot infestations,” Gossen says.

When looking for clubroot in these locations, Gossen says agronomists and growers need to be proactive and try to confirm the presence of the disease at early stages. Pull up or dig out canola roots and search for signs of galls later in the growing season. Identifying tiny galls on canola roots provides an early warning signal and time to implement some localized management practices. Once gall development becomes larger with higher numbers of spores, preventing the spread of spores is more difficult

Random surveys conducted by government agencies help track the disease, but of 1,500 fields surveyed in Saskatchewan in 2018, only two of 37 confirmed cases of clubroot were identified randomly – the rest were confirmed from farmers and agronomists sending in samples for testing.

While clubroot zoospores require moisture in the soil to swim to a canola root, dry conditions don’t always mean clubroot won’t infect the plant. Gossen says in 2009, rain didn’t fall until July in Alberta, and researchers thought there would be less clubroot. That wasn’t the case. Three weeks after the first rain, infection was identified and at the end of the season, the researchers saw the biggest galls they had ever seen.

Tight canola rotations are one of the reasons clubroot is spreading. A two to three year break can reduce spore levels in soil by 90 to 99 per cent. However, under heavy spore loads, the remaining spores can still cause high enough disease levels to create 100 per cent yield loss.

Resistant varieties also help minimize the damage, but in Alberta different pathotypes capable of overwhelming the resistant genes were present in many fields within four years of the introduction of the first resistant variety. 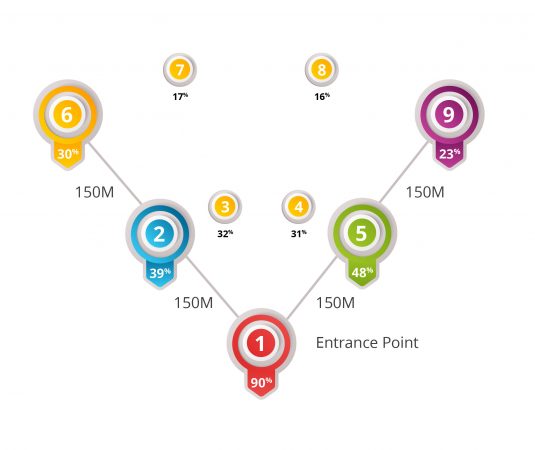 Pattern of occurrence in fields. Photo courtesy of Strelkov.

“Outside of the oil patch, I don’t think anyone is spraying caustic bleach on their equipment. Most just knock off the dirt,” Gossen says. “But if I was in Manitoba and brought in a used combine from Alberta, I would clean and sanitize that combine inside and out.”

Clubroot prefers soil pH below 7.2, and researchers have found that liming soils with hydrated lime to raise pH can help reduce clubroot infection. But at six to seven tonnes per acre at $1,000 per tonne, the cost is prohibitive on a field scale basis. Gossen says that liming may be a good tool for patch management when the disease is first getting established in a field. However, with good moisture and high soil temperatures, clubroot can still develop, so liming is not the complete answer.

Gossen also conducted research into the effect of soil type, organic matter, and compaction on clubroot severity. He found that soil type or organic matter had very little affect on severity, but clubroot was more severe on compacted soils. Field entrances are generally more compacted than the rest of the field, so minimizing compaction may help to minimize the severity of clubroot in those areas.

He found that soil type or organic matter had very little affect on severity, but clubroot was more severe on compacted soils.

When clubroot is first identified in a small patch, Gossen recommends farmers mark out at least twice the infected area in every direction and exclude traffic. If possible, canola roots with clubroot galls should be removed from the field and burned to destroy the spores.

The next step Gossen recommends is to incorporate lime to bring pH up to 7.5, and then seed a sod-forming grass to provide a break from canola and to prevent the movement of spores. Once the sod is established, traffic over the grass can resume.

The sod patches can be monitored over the years by soil sampling to monitor spore concentrations. When spore levels fall to a low level, the sod could be broken up and re-cropping with a clubroot-resistant variety resumed on a three-year (or longer) rotation.

Gossen suggests a permanent grass cover be established at the field entrance, because this is where equipment is dropped and clubroot often gets a foothold. He says the Canola Council of Canada builds on that recommendation by recommending a different, grassed exit for infested fields, where equipment can be cleaned off before moving to the next field.

“No single approach will work on its own,” Gossen says. “That’s the take-home message. You just can’t rely on resistant varieties.”