Few common diseases of field crops in Western Canada are as little understood as aster yellows, a systemic plant disease that impacts cereals and oilseed crops and can have devastating – but hard-to-predict – impacts on yield in bad years. 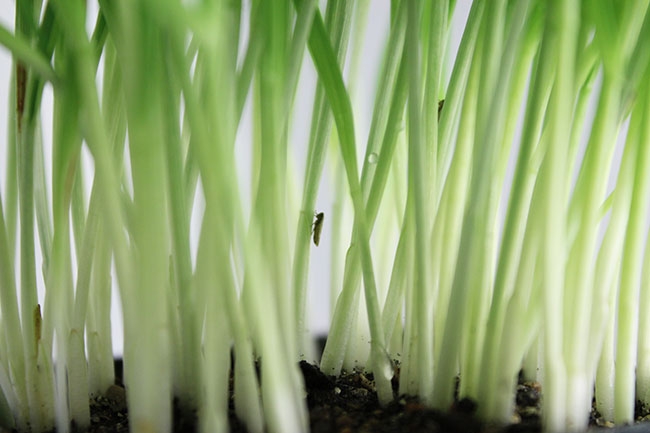 Aster leafhoppers are tiny in comparison to the plants they feed on.

The disease is caused by the aster yellows phytoplasma (AYP), a bacterium-like parasitic organism that is vectored by aster leafhoppers (Macrosteles quadrilineatus) thought to travel north on jetstreams from continuous cropping systems in the United States.

Symptoms of AYP can be detected in many Western Canadian field crops most years at levels that aren’t economically damaging, but conditions that characterize a “bad” aster yellows year are harder to pinpoint.

According to Tyler Wist, an Agriculture and Agri-Food Canada (AAFC) research scientist in field crop entomology based in Saskatoon, the disease seems to run on a cycle – every five to eight years producers will see heavy impacts on yield. In 2012 – the latest aster yellows year – a range of five to 64 per cent of plants were infected per field.

That year, canola producers saw impacts on this scale, Wist says, but producers also noticed problems with wheat. They called the phenomenon a “phantom yield loss” because they didn’t at the time know what had caused it, but the culprit, according to Wist, was most likely aster yellows infection.

Along with colleagues Pierre Hucl, a plant breeder at the University of Saskatchewan, and Chrystel Olivier, an AAFC research scientist, Wist recently wrapped up a three-year project looking at aster yellows in spring wheat. The project sought to document symptoms of the disease in wheat cultivars, compare cultivar susceptibility and estimate disease incidence.

The team compared about 25 wheat lines out in the field, Wist says, but most of them did not exhibit much symptom expression when infected with aster yellows; most wheat seems to be fairly resistant, with durum showing slightly more susceptibility.

Hucl says out of the three years of the study, there was heavy infestation in only one year, but even under those conditions the differences weren’t that great between common wheats and durum.

To boot, most of the symptoms of aster yellows infection in wheat noted by the researchers are also symptoms of other diseases or common crop problems. “We didn’t see any symptoms that we could conclusively say were due to aster yellows,” he says.

In other words, the study did not yield much in terms of recommendations for producers, Hucl says, but the data adds to researchers’ longer-term understanding of how the disease works.

Symptoms and controls
Symptoms of aster yellows infection in wheat, when they do occur, can include plant death, stunting of plants, a reduced number of tillers, bleaching of the tillers and heads, twisting of awns and premature yellowing.

The aster yellows in cereals project followed on the heels of work completed in 2016 by Olivier identifying aster yellows symptoms in canola and camelina.

Brassicas are more susceptible than cereals to aster yellows, and symptoms in these crops are more obvious – and bizarre. In oilseeds, the disease attacks the growing regions of the plant and turns floral parts green. “Things that aren’t leaves start looking like leaves,” Wist, who also worked on Olivier’s project, explains. “There are effects on the seeds too – one symptom is that they tend to sprout inside the pods.”

Beyond identifying symptoms, Olivier’s project also helped pinpoint conditions that are ideal for aster yellows infection in canola: three or four leafhoppers, which need to be carrying AYP, must feed on a single plant for up to 10 hours to transmit enough phytoplasms to infect the plant. Young plants are more likely to be infected, and the problem is exacerbated by wet conditions.

Because symptoms and conditions conducive to the disease are less obvious for wheat, researchers are looking for ways to render aster yellows less of a “phantom.” One method is to analyze the movements – and alternate hosts – of aster leafhoppers, Wist says.

Leafhoppers do not move very far once they have found a good place to feed, and their patchy feeding in canola leads to similarly spotty distribution of aster yellows symptomatic plants in fields. Though symptoms are more obvious in brassicas, aster leafhoppers don’t reproduce in canola but in cereals: thus, Wist says, higherpopulations of the insect can be found in canola near cereals.

A new project funded through SaskCanola will look at alternate hosts for aster yellows, including weeds, he says. “Down in the States they’ve shown that perennial weeds can be the reservoir for aster yellows. Up here, if they start feeding on a weed that has aster yellows and aster yellows has come back up from the root, you can get aster yellows moving into the crop plants.”

Another project funded by Western Grains Research Foundation set to begin this year will attempt to understand source populations and leafhopper dispersal.

Understanding alternate hosts can help producers get a sense of a potential aster yellows problem, Wist says, particularly if they find leafhoppers in ditches near crops early in the season.

But as spraying for aster leafhoppers is not recommended by researchers, the best control is to plant resistant varieties – and to keep an ear to the ground as new research projects turn up new information about aster yellows.