The 144 plots in this major field experiment are providing information on the long-term effects of different crop rotations on crop yields and soil health. Photo courtesy of Craig Drury, AAFC.

A long-term crop rotation experiment in southwestern Ontario is proving to be a gold mine of information about the effects of different rotations on crop productivity and the environment. Now a study led by Craig Drury has extracted some valuable nuggets on the effects of the experiment’s soybean rotations on soil health and crop yields.

The rotational experiment started two decades ago. “In the late 1990s, I was observing two of our tillage studies. I noticed that the corn yields appeared to be more stable at the site where the corn was grown in a winter wheat-corn-soybean rotation compared to the other study that had a corn-soybean rotation. Even though the two sites had the same soil type, the sites were a couple of kilometres apart. So I wasn’t sure if the corn yield differences between these sites were due to variations in soil properties or the choice of crop rotation,” explains Drury, a researcher with Agriculture and Agri-Food Canada (AAFC) in Harrow who specializes in soil management and soil biochemistry.

“So I decided to investigate the long-term impacts of growing crops in diversified rotations compared to either monoculture cropping or two-year rotations.”

Drury initiated the field experiment in 2001. The plots include continuous corn, continuous soybean and continuous winter wheat, and two-year, three-year and four-year rotations involving these crops, with and without red clover in the wheat phases of the rotations. This huge experiment, which is located on a Brookston clay loam soil near Woodslee, has 144 plots.

“Initially my focus was on the effects on crop yields,” he notes. “Then somewhat later we looked at some of the environmental quality aspects associated with the rotations. More recently, we have focused on the new soil health indicators [that have been developed by various research groups in recent years].”

Drury worked mainly on the agronomic aspects of the study, while Ikechukwu Agomoh, a post-doctoral researcher working with Drury at the time, examined the soil health indicators.

The researchers considered these indicators in relation to the five-year (2014 to 2018) average soybean yields for the different rotations. Drury explains, “These soils have changed over time, but they are now reaching a steady state. So we wanted to know if any of these soil health tests were predictors of the observed yield differences.”

Figure 1 highlights some of the results. Note that in 2017, the continuous soybean plots had poor emergence so the plots were rototilled and replanted almost one month later. As a result, yields were very poor that year and lowered the five-year average yield by 4 to 7 bushels per acre. 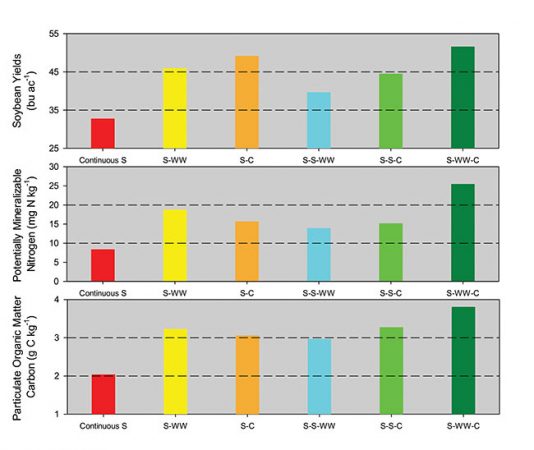 Nuggets of new knowledge
Overall, the results from this study show that including corn and wheat in a rotation with soybean increased soybean yields and soil health remarkably.

“So there was a really dramatic yield benefit, especially with the three-year rotations.”

Adding wheat and corn to a soybean rotation also had strikingly positive effects on some soil health indicators. These include fairly stable indicators like total organic carbon that change very slowly as well as much more dynamic indicators like respiration, particulate organic matter carbon and potentially mineralizable nitrogen (see Figure 1).

Take-home message
Drury’s key message to soybean growers from this study is: “to try to keep growing soybean in as diversified a rotation as is possible to match their soil and climatic conditions. Some of the ways to achieve this would be to grow soybean in rotations with cereal crops such as winter wheat and in rotations with corn, and wherever possible to try to use cover crops in the rotation as well.”

He explains that including soybean as part of a good crop rotation can be a wise choice, especially since soybean fixes its own nitrogen and helps diversify the soil microbial community. More diverse microbial communities tend to be more active, breaking down more crop residues and contributing to healthier soils and crops.

However, problems can emerge when there are too many years of soybean in a rotation.

One of the reasons for these problems is that soybean, like other spring-seeded annual crops, leaves the soil without a growing crop for a relatively long period compared to winter cereals, cover crops and perennial crops.

“In southwestern Ontario, crops like soybean are generally planted in May and harvested in October, after a few weeks of drying down. So the crop is actively growing from May until the end of September. During the growing season the plants are using photosynthesis to capture carbon dioxide from the air and convert it to carbon compounds in the soybean plant, some of which ultimately go back into the soil and others are harvested as grain. However, there is no crop growth from late fall until spring planting with annual crops,” Drury says.

In contrast, fall-seeded crops like winter wheat or a cover crop like red clover or cereal rye will grow in the fall until freeze-up and then start growing again in the early spring as soon as the weather warms up. That extends the growing period, enabling greater capture of atmospheric carbon dioxide, which ends up in the grain and the soil carbon. Plus the overwinter plant cover reduces the risk of soil degradation due to soil erosion and nutrient leaching.

Another reason that too many years of soybean can have a detrimental effect is the plant’s low carbon to nitrogen (C:N) ratio. The C:N ratio for soybean residues is about 20:1, compared to about 80:1 for wheat and corn residues. “That means soybean residues tend to break down very rapidly compared to corn or wheat residues. So soybean returns less carbon to the soil, and what it does return decomposes very quickly,” explains Drury.

“The end result is that if you have too many years of soybean in a row there is a lower carbon return to the soil.”

A piece in the sustainability puzzle
This soybean study is one of several soil health studies that Drury and the other members of a multidisciplinary team of soil scientists at AAFC-Harrow are conducting with the 20-year-old rotational experiment.

For instance, Drury and Agomoh are the principal investigators in their 2019 paper looking at winter wheat yields and soil biochemical indicators in the wheat phase of the rotations. This research showed that, although continuous wheat had a positive effect on soil health indicators, it did significantly reduce wheat yields. For example, wheat yields in some of the two-year and three-year rotations were 32 to 39 per cent higher than yields for continuous wheat.

Other studies by the team are currently looking into various soil health indicators related to the soil biological, biochemical and physical properties of the experiment’s rotations.

Dr. Lori Phillips is leading a study on the soil microbial ecology in the rotations, to identify the beneficial microbes and determine how they help improve soil health and soil quality. Dr. Dan Reynolds is studying soil physical properties like soil hydraulic conductivity and soil compaction. In addition, Dr. Xueming Yang is conducting research on changes in the more active carbon fractions in soils and studying these as potential indicators of soil health.

A follow-up study at this site by the Harrow soils team involves carbon storage (or sequestration) in the soil profile, which is good for the soil and good for the environment. Drury says, “We took hundreds of soil cores down to a metre (3.3 feet) from these plots. We have started to do a carbon balance on these soils to see how the different crop rotations have affected soil carbon sequestration.” Although this study was delayed because of the COVID-19 lab shutdown, the researchers plan to finish the analyses and examine some of the effects of the rotations from a climate change perspective.

“Some of the soil health indicators can be good indicators of sustainable management practices that will help to maintain food safety and food security. But diverse crop rotations can also have environmental benefits. As an example, we measured emissions of nitrous oxide, which is a greenhouse gas, on some of these plots a few years ago. We found that some of the more diverse rotations had lower nitrous oxide emissions than the simpler rotations,” Drury notes.

“Soil health indicators are one piece of the puzzle, which is a very important piece for long-term crop productivity. But we also see multiple co-benefits in terms of being more environmentally friendly with some of these more diverse crop rotations.”