Features Agronomy Tillage
It’s better to till in the zone

For years, farmers have heard about the advantages of no tillage, but don’t find it to be the ultimate solution everywhere. Now, new research suggests zone tillage could excel on land less suited to no till. 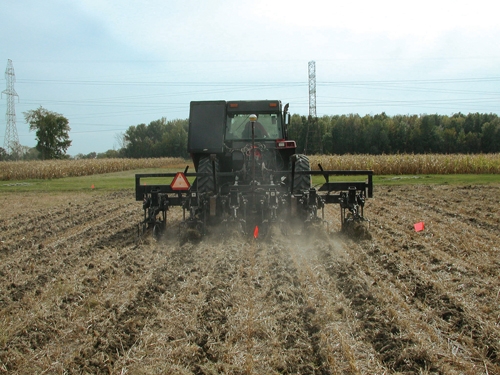 Zone tillage being done. For years

No till has been widely adopted for many reasons. The practice has been shown to decrease soil erosion, surface runoff, production costs, and improve soil porosity and organic matter. But reduced corn yields, caused by no till’s increased crop residues, surplus soil water and lower soil temperatures, deter farmers from no tilling in some clay textured soils. Zone tillage is the compromise between no till and conventional tillage that these farmers need, according to Dr. Craig Drury, a soil management and biochemistry researcher with Agriculture and Agri-food Canada (AAFC).

Drury and his colleagues have been studying the effects of different tillage systems for 20 years. Using a mouldboard plow at a depth of 15 to 18 centimetres starkly contrasts with the no-till system but Drury says zone till combines the two nicely, leaving 72 percent of the field untouched as they only cultivate 21-centimetre-wide strips. On a Brookston clay-loam soil, which is fairly typical soil in southwestern Ontario and many corn-growing areas in the northern states, this offers a warmer and drier seed bed plus all the benefits of no-till carbon management. Recently, Drury teamed up with Dr. Xueming Yang, Dr. Dan Reynolds, and Dr. Neil McLaughlin, all of AAFC, to determine exactly how each system compares when it comes to production and environmental quality.

“I am very fortunate because I am working with colleagues who really add their own strengths and expertise to make these studies multidisciplinary,” says Drury.

Greatest for sequestering carbon
To assess the full benefits of all three tillage systems, Drury and his colleagues first reviewed the impact to carbon sequestration. They found that no till produced very high carbon contents in the soil’s surface, but that the concentration of carbon dropped deeper in the soil profile. When they compared these results with conventional till, they saw a completely opposite effect as a result since more carbon is mixed into deeper depths and some is lost to mineralization or CO2 emissions in the process.

Drury points out that this is very different from what they would find in western provinces or in some situations where you have a different soil texture. But for farmers in Ontario or the northern United States on heavy soils, these results suggested it really didn’t matter which tillage system they chose because the carbon storage was similar with both no till and conventional tillage, until they consider zone tillage.

“The amount of carbon associated with the zone till treatment in the surface soil was fairly similar to what we find in the no-till system, but the carbon levels at the lower depth are similar to conventional till,” says Drury. “When you add up the carbon stored in the entire profile, we found 11 to 12 percent more carbon storage with zone till than with either no till or conventional tillage.”

Drury says they looked at other physical quality and agronomic data to explain these carbon results.  One observation to note was that zone till offered the lowest penetration resistance values, requiring less effort for plants to send their roots down into the soil. Another important consideration is the fact that there is less mixing of soil and residues in zone tillage. Drury says conventional plowing mixes residue so thoroughly that it accelerates the decomposition of organic matter, but zone till isn’t this aggressive. Even though both systems produce similar crop yields, the overall carbon balance is higher in zone tillage because the carbon sources break down more slowly.
“So our carbon inputs are the same (plant residues), our carbon dioxide losses tend to be lower, and as a result we are gradually building up the carbon in soils with the zone-till system.”

Best at retaining nitrogen
Not only does zone tillage produce good conditions for plant growth on heavy soils, but also the researchers have established it reduces nitrous oxide emissions. An earlier study showed that zone till has the lower losses of N2O, a greenhouse gas, than conventional till and no till. But in their more recent study, Drury and his colleagues wanted to compare different nitrogen sources and application timing combinations to see if they could find more ways to save nitrogen.

“Fertilizer is becoming extremely expensive, especially for high nitrogen demanding crops,” says Drury. “When you start losing it to through gaseous N2O emissions (biological denitrification) or by nitrate leaching, it is both an economic loss as well as an environmental problem.”

“When nitrogen was applied at planting alone, it had 33 percent greater N2O emissions than when it was added as a side-dress application, especially with conventional till,” says Drury. “It illustrated that there were benefits in applying your nitrogen a little later in the season than all at planting.”

But most striking of all their observations was that nitrogen, of any source, consistently emitted less N2O when used in zone-tilled fields than when used with conventional or no till. Drury says that zone till averaged 44 percent fewer N2O  emissions than conventional till, which more than doubled the reduction achieved by no till over conventional till. Ultimately, nitrogen losses can be reduced either by side dressing on conventional soil or by simply switching to zone tillage.

Drury also points out that, with the right rotation, no till can still play a role where it provides comparable yields, and says he would never suggest that farmers should abandon the practice of no till. In this study, a winter wheat/corn/soybean rotation was implemented with zone tillage applied in the fall following winter wheat and before corn. Corn is then planted into the centre of the zones the following spring. Drury says this rotation and tillage combination (one year of zone tillage before corn and two years of no till before soybean and wheat) works in this case because soybeans and winter wheat aren’t plagued by the same problems corn is in cool, wet soils.

“[Zone tillage] is very soil specific,” Drury says. “I think there are opportunities with some of these conventionally tilled clay and clay-loam soils and there would be substantial benefits by switching to zone till.”
After working with these different tillage systems for several years, Drury says, his work has become a fine-tuning process, trying to identify what management options farmers can implement to see more improvements. He hopes to continue his work by identifying ways farmers can reduce potential ammonium volatilization losses, and is particularly keen to reduce nitrogen losses in the cereals part of a crop rotation as well as in side-dress corn.

“I firmly believe that zone tillage is a viable practice,” says Drury. “Now I am trying to look at what we can do to make it a more efficient system, a system where more of the nutrients go into the crops, environmental losses are reduced, and farming practices make more efficient use of inputs.”