Pasmo is on the rise. These days, this fungal disease is the most prevalent disease of flax on the Canadian Prairies. It affects flaxseed yield and quality, with severe infestations reducing yields by 50 percent. In response, Agriculture and Agri-Food Canada’s flax pathology/breeding program at Morden, Manitoba, is developing flax lines with resistance to pasmo as well as examining strategies to manage the disease.

“Pasmo is very widespread and affects flax in all flax growing areas of the Canadian Prairies and the north central United States,” explains Dr. Khalid Rashid, who is leading the flax pathology program.

“The fungus infects flax leaves, causing defoliation under severe epidemics,” he notes. “It also infects the pedicels, which are the tiny branches that carry the flax bolls. Infected pedicels are weak, so windy and rainy conditions result in boll-drop, causing serious yield loss.”

“The disease also infects the stems, causing alternating bands of brown infected tissue and green healthy tissue,” adds Rashid. “The infected stems tend to lodge. Moist conditions in the lodged crop favour the further spread of pasmo as well as the growth of other fungal diseases, like alternaria and botrytis, which can result in a mouldy stand with greatly reduced seed yield and quality.”

Pasmo is caused by Septoria linicola, and the fungus overwinters on the flax stubble. “When moist conditions return in the spring, fungal structures called pycnidia swell and release conidia [spores] into the air,” says Rashid. “The conidia infect the leaves of flax seedlings, including the cotyledons. The infection on the leaves produces more pycnidia and more conidia. The spores are splashed by raindrops, spreading the infection up higher on the plant and to adjacent plants.”

Infected seed can also be a source of pasmo. “In that case, the fungus spreads from the seed to the seedlings, and the infected seedlings become foci for disease spread and development.”

The disease is favoured by wet conditions, including splashing rain and high humidity. A dense, weedy or lodged canopy that traps moisture around the flax plants provides ideal conditions for the disease. The fungus can infect plants over a range of temperatures, from about 15 to 30 C.

An increasing problem
Since Rashid started with Agriculture and Agri-Food Canada (AAFC) in 1987, he has been conducting flax disease surveys annually in Manitoba and Saskatchewan, and in some years in Alberta. The surveys record data on three aspects: disease prevalence, whether the disease is present or not in a field; disease incidence, the percentage of plants infected in each field; and disease severity, the percentage of stem area affected by pasmo.

Rashid’s surveys also show pasmo is an increasing problem. “Over the last 15 or 20 years, we have seen pasmo increase in incidence, severity and prevalence,” he notes. “For any disease to occur, there has to be the pathogen, a susceptible host and the right environment. There’s no shortage of inoculum of this fungus on the Prairies. And all registered flax varieties in Canada are susceptible to moderately susceptible to pasmo.” So, when the weather conditions favour the disease, it’s very likely to occur. (For more information on yearly disease incidence and severity, refer to the Canadian Plant Disease Survey at http://phytopath.ca/cpds.shtml.)

Changes in management practices have probably contributed to the increasing occurrence of pasmo. For example, because burning flax stubble is no longer an option in most areas, the presence of diseased stubble is more of an issue.

As well, crop rotations are becoming shorter, which can increase the risk of pasmo inoculum in the flax field or nearby fields.

Other challenges in controlling pasmo can include weed infestations that result in thick canopies, and late seeding, notes Rashid. “Flax is traditionally the last crop to be seeded by growers, but we’ve seen that early seeding tends to reduce the risk of severe pasmo infections later in the season.”

Towards resistant cultivars
Although Rashid’s research team is small and receives little funding from outside of AAFC, his flax pathology program has made major contributions to developing disease-resistant cultivars over the years. “All flax varieties in Western Canada now have immunity to rust, resistance to fusarium wilt and some resistance to powdery mildew, and it’s all based on genetics and information generated from AAFC’s flax program at Morden,” says Rashid.

Pasmo is now a priority for the program. His research team is in the process of looking for resistance to pasmo in all the flax germplasm at Plant Gene Resources of Canada in Saskatoon. This national gene bank has more than 2000 flax accessions, and the researchers test a few hundred of them every year in field trials and controlled environment trials.

“In the field we do artificially inoculated trials where we spread straw from the previous year between the rows as a source of inoculum, and we use a misting system to create the conditions for the fungus to produce conidia to infect the crop,” he says. “Indoors, under controlled conditions, we use specific isolates of the fungus to see if we can divide the pathogen population into races, or pathotypes, and then hopefully find a single gene or a few genes that are resistant to each pathotype, and then pyramid those genes together to create resistant cultivars.”

The researchers are studying the pathotypes to understand the virulence in the fungal population on the Prairies, and they are making progress on identifying sources of resistance to individual isolates.

“Hopefully in a few years we may produce some cultivars with partial resistance,” says Rashid. “It’s not easy to build all those resistance genes for rust, wilt, powdery mildew and pasmo into an adapted, high yielding cultivar, but we’re trying.”

Testing management options
For about the last six years, Rashid has been conducting foliar fungicide trials to evaluate the effectiveness of various products in controlling pasmo, and in reducing the disease’s impacts on seed yield and quality. In these trials, his research team uses infected straw and the misting system to inoculate the crop. When the pasmo lesions start moving from the lower leaves to the middle leaves of the flax plants, the researchers make an initial fungicide application. In some years, they have more than 40 different treatments, comparing check treatments to one, two and three fungicide applications.

The results from the trials are released to the specific fungicide companies and to the federal government’s Pest Management Regulatory Agency, to help in the minor use pesticide registration process. For instance, control of pasmo on flax was added to Headline’s label a few years ago, and Rashid is hopeful that more products will become registered for flax in the future.

He has also done some studies on the effects of other management practices on pasmo. “Experiments with seeding dates have proven that, for controlling pasmo, it’s much better to seed from early to mid-May, than to seed in late May or the first week of June. In most years, early seeding helps the crop develop through flowering before pasmo becomes widespread, so the crop has lower disease levels and minimum losses in yield and seed quality.” 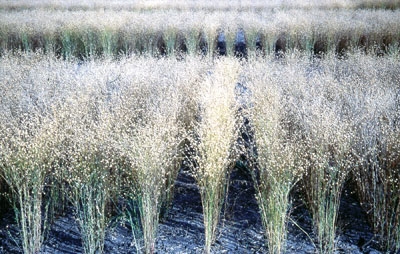 Rashid’s foliar fungicide trials provide data for the process for registering products that control pasmo on flax. Pasmo fungal disease is the most prevalent disease of flax on the Canadian Prairies.