New research, such as the use of recycled struvite P, is pushing the industry forward. 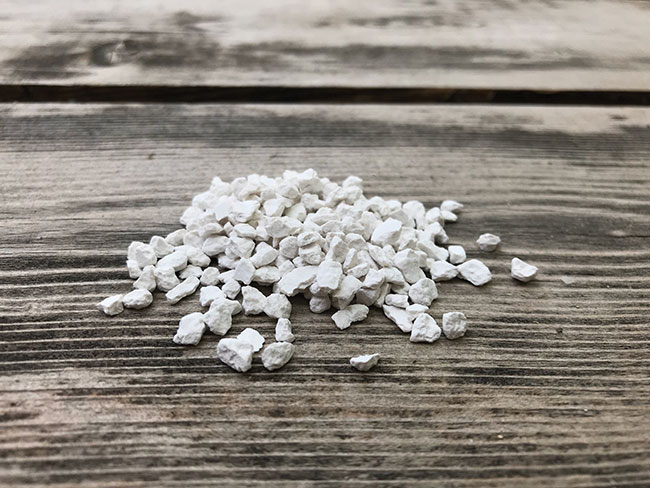 Organics deserve a seat at the grown-ups’ table,” writes Martin Entz, a professor of natural systems agriculture at the University of Manitoba, in an essay prepared for the Advanced Plant Science seminar in April 2021. “Integrated into Canada’s existing agricultural landscape, organic agriculture is a market-based solution to some of our most ‘wicked’ problems.”

Organic farming is no longer niche in Canada. According to Statistics Canada, the number of organic farmers doubled between 2001 and 2016 and is still increasing.

At 2.2 per cent of Canadian farms, organic producers are still in the minority. But as the numbers grow, research into the trickiest problems in organic agriculture – resilience to abiotic stresses such as heat and drought, pest management and nutrient management – is keeping pace.

Entz has been studying organic cropping systems at the University of Manitoba’s long-term organic study at Glenlea research station for 30 years.

He says markers of soil health such as soil aggregate stability, which reflects soil’s water holding capacity, will be increasingly important measures of climate resiliency, he says. “The 2021 drought showed us that organic crops can be very sensitive to drought stress, so we need to focus on water use efficiency, and we do that by improving soil and its water holding capacity,” Entz says.

The newest publication to arise from efforts at Glenlea is a 2021 paper in the Canadian Journal of Soil Science in which MSc student April Stainsby compared soil aggregate stability in a forage-grain organic treatment, a forage-grain conventional treatment and natural grassland.

On the weed management front, a new study at Glenlea will assess the effectiveness of a camera-guided interrow cultivator weeder, a first generation robotic weeder that allows the user to cultivate between the rows.

On the nutrient management front, Entz says farmers who plan ahead well in advance have fewer issues and a slowly widening choice of inputs. “We’re not just using compost and beef manure. We’re using insect frass – poop from insects – and digestate. We call them anthronutrients, nutrients from cities [that can] fuel our agriculture,” he says. 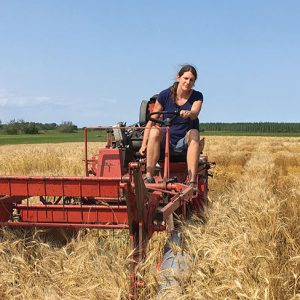 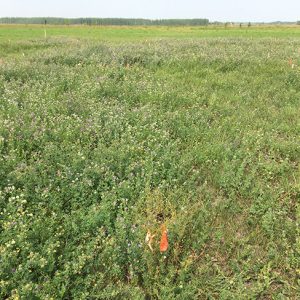 Alfalfa-grass forage fertilized with struvite (left) or no fertilizer (right). Fertilizer was applied in 2017 and photo taken in 2018. Photo courtesy of Joanne Thiessen Martens.

She says that though nitrogen is still the chief limiting factor in terms of yield in organic systems, it’s phosphorus that represents a bigger challenge.

“There’s a mindset out there that cover crops and soil biology can solve your nutrient problems and make P out of nothing. I don’t want to promote that, because we need to replace P – cover crops only work if you have a decent amount of P in the soil in the first place,” she says.

In a 2021 paper, co-authors Entz and Jessica Nicksy, a University of Manitoba graduate student, review the challenges associated with the P cycle for organic production and look at recycled fertilizer sources for use in organic systems.

One promising option is struvite, an ammonium magnesium phosphate mineral that precipitates naturally in sewage treatment pipes and can be deliberately extracted for use in agricultural systems.

“Commercially available struvite has a high P content (NPK 5-28-0-10 Mg) on the same order of magnitude as mined synthetic P fertilizers like MAP (11-52-0). This makes struvite a feasible option for shipping P from high-P to P-depleted regions,” the authors note.

Wheat grain yield, P concentration and P accumulation increased with corresponding increases in struvite rate, while flax showed little to no response. “Benefits to forage yield and P accumulation were greatest in the second year, demonstrating important residual effects of struvite application,” Thiessen Martens and her co-authors write in a recent publication on the study.

“Some of the recovered P products end up being too insoluble, others are too expensive, others carry other contaminants of wastewater,” she explains. “But struvite hits a sweet spot – it’s quite a pure compound because of the precipitation process, it’s moderately available to plants and it’s economically viable.”

Thiessen Martens has also studied green manure as a nutrient source for organic farming. She says her research found that many fields with a green manure cover crop were short on P.

“It confirms what past studies have shown, and highlights again how serious the phosphorous issue is for organic farmers,” she says. “We know we can provide enough nitrogen for organic crops by providing really good green manures. But P deficiencies, once they develop, are hard to remedy unless you have a lot of livestock manure around. That’s the problem Prairie farmers are at now with dropped P levels so that they’re limiting not only cash crop yield but green manure productivity, which cascades into poor cash crop yields.”

Thiessen Martens and her collaborators are expanding their research into struvite as a P option for organic producers. Future work will look at interactions between struvite and soil microbial communities. Not-yet-published research will also examine how efficiently green manures can dissolve struvite and make P available to other crops.

As organics continues to gain market share in Canada, more farmers will be looking to the research to support decision-making in the field. A new crop of farmers, says Entz, is keen to learn.

This year, an unprecedented 50 students registered for his organic crop production course. At Glenlea, a brand-new, state-of-the-art Organic Agriculture Learning Centre will allow instructors to teach principles in the classroom before heading to the research plots for field work.

“There are always challenges, but the next step is to bring that knowledge to established farmers and younger students. That’s where we’ve put our efforts,” Entz says.