Preliminary findings from the Saskatchewan-based Pipestone Creek project, which analyzes beneficial management practices (BMPs) to minimize nutrient loss from agriculture, suggest that nutrient loss in snowmelt may be more significant than from rainfall runoff.

According to lead researcher Barbara Cade-Menun, a nutrient-cycling scientist with Agriculture and Agri-Food Canada (AAFC), most BMPs designed to slow nutrient runoff are geared toward summer storms, but are less effective against nutrient loss in snowmelt runoff.

“A lot of the BMPs that are developed to manage soil erosion, like conversion to zero-till and buffer zones, are designed to stop [soil] particulates from moving, and to control for erosion,” she says.

But in the spring snowmelt, when the soil is still frozen, the runoff, carrying fine nitrogen- and phosphorus-rich organic matter, goes right through barriers such as buffer zones.

Cade-Menun and her team have not yet concluded the seven-year study or gathered enough data to make definite recommendations for BMPs producers should adopt to reduce nutrient loss through runoff. However, preliminary findings suggest that certain practices may influence the soil’s ability to hold its nutrients.

Key among these is timing. Many producers, says Cade-Menun, see the first snowfall as the beginning of a dormant season, and if they don’t have cattle they stay off the land until everything dries up in the spring.

Producers “might be working hard to put the right BMPs in in the spring, but maybe it’s what they do in the fall that matters more,” says Cade-Menun. “That’s what our results are suggesting, even though we can’t make specific recommendations as yet. We need to develop BMPs that focus on the fall as much as they focus on the spring and summer.”

One example of a potential problem area for increasing nutrient runoff in snowmelt is fall-spread manure. “Spreading manure in the fall might not be a good idea – we get more nutrients coming off fall-spread manure, likely because it hasn’t had a chance to incorporate and react with the soil,” says Cade-Menun. Further testing is needed to determine the optimal time for manure spreading, to keep the manure nutrients in the soil where they can provide the most benefit to producers.

The monitoring efforts at Pipestone Creek include snow surveys, conducted close to snowmelt during the spring. These surveys measure snow density and depth, and analyze nutrient content as well as predicting runoff versus infiltration into the soil.

Differences in the form of nutrient loss from perennial pastureland and zero-till cropland also suggest that the form cropping systems take has an impact on the kind of nutrient loss those fields will experience. For example, dissolved phosphorus (P) concentrations were higher in runoff from croplands, while particulate P concentrations were higher in runoff from pastures. Dissolved nitrogen (N) was lost from cropland in nitrate form, while it was lost in nitrate and ammonium form from pastureland.

“We’re not sure the concentrations [of N and P] downstream are high enough to trigger algal bloom, but they represent a loss to producers,” says Cade-Menun. “We need to find the best methods to keep these nutrients in the fields where they belong and to minimize any environmental risks.”

Freeze-thaw cycles
In a paper entitled “Biological, Chemical and Physical Processes in Seasonally Frozen Soils,” Cade-Menun and her co-authors argue that understanding the effects of freeze-thaw cycles (FTCs) on agricultural soils can lead to the development of BMPs that are more effective at controlling nutrient loss in the non-growing season.

Climate change has impacts on FTCs, and the risk of increasing fluctuations in FTCs in the future lays extra imperative on the need for a better understanding of the activity in winter soils and the avenues of nutrient loss in the spring.

In another paper analyzing the effects of FTCs on infiltration rates, Cade-Menun and her co-authors argue that increased frequency of FTCs demonstrably reduced infiltration rates into all soils. “With current predictions for increased frequency of FTCs at higher latitudes and elevations, Saskatchewan soils will likely incur further soil porosity and structural changes,” the authors write. “Understanding and monitoring such changes can improve our knowledge of the hydrology and the environmental impact of agricultural and other practices.”

Even though the study has not yet concluded nor BMPs definitely identified, Cade-Menun’s message is clear: snowmelt represents significant nutrient loss on agricultural land, and producers need to pay attention to potential causes.

“Does it matter if you hay in the late summer or in the fall? How much standing biomass do you want on your fields during freezing and snowmelt? A lot of people go to tall standing stubble because it traps more snow. Does that release more nutrients?” asks Cade-Menun. “I don’t know the answers to these questions, but again it’s clear that the state that you leave your site in in the fall will make a difference in the spring.

“We need to think about what we’re doing and develop BMPs specifically for the Prairies, especially for snowmelt runoff.” 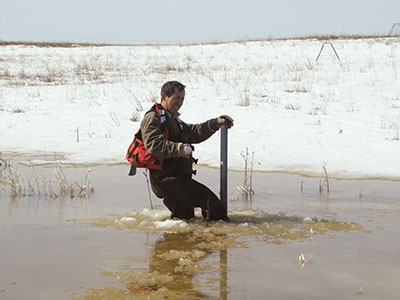