Canola harvest management starts with planning ahead and getting it right in the spring. Everything else will follow, pending weather and growing conditions.

“Planning ahead for harvest, especially if growers are thinking of straight cutting their canola, is important,” says Chris Holzapfel, research manager with the Indian Head Agricultural Research Foundation (IHARF) in Saskatchewan. “Backing all of the way up to spring prior to seeding is the best place to start planning for harvest.”

Growers have options to either swath and combine or straight-combine canola crops, depending on crop conditions, harvesting equipment and risk management. Swathing can hasten and even out maturity, and desiccate green weeds. Swathing can also reduce the potential for shattering under most conditions, and provides more flexibility of harvest timing relative to straight combining.

Straight combining, on the other hand, eliminates the swathing cost and reduces labour requirements. Under some conditions, such as thin stands, short or badly lodged crops, straight combining can reduce risk and improve seed quality. “Straight cutting will typically delay harvest a bit relative to swathing, and although it varies from year to year, a delay of a week is fairly typical before starting to combine,” explains Holzapfel. “Therefore it is advisable to try and get some of the canola fields seeded relatively early, so they will mature early and get the whole harvest operation started a bit sooner.”

Using recommended seeding rates, attaining higher fertility and ensuring adequate plant stands are established are priorities. “Although growers may be interested in cutting back on seeding rates, if you want to consider straight combining then this is not the best time to be cutting back,” says Holzapfel. “Low plant populations will delay maturity and result in a lot more branching and variability in the plant in terms of pod staging and maturity. A higher plant stand will result in smaller plants with more pods along the main stem, encouraging quicker and more even maturity. Higher plant stands will also reduce the impact of potential establishment problems because of drought, poor seedbed conditions or drowning out.”

Anything growers can do to get a high yield potential is important. A dense canopy can possibly reduce shattering potential and increase the odds of success. During the season, crop scouting and assessing weeds, diseases and insect pests is a key management strategy. If there are potential problems, then a decision of pre-harvest glyphosate or desiccation may be a consideration, and then it’s all about timing. Attaining adequate fertility, using a good seeding rate and seeding early are probably the three most critical factors for initial planning.

Research compares swathing and straight combining
Holzapfel has several research projects comparing swathing and straight combining canola. Factors such as the use of pre-harvest glyphosate and pod sealants, fungicides and varieties have also been compared. “Timing of harvest is usually critical with straight combining canola,” he says. “As soon as the canola is ready to put through the combine, has a low enough green seed content and is fit to store, then growers need to be getting out there as quickly as possible. The longer the crop stands, especially as it starts to get overripe or dry, then the risk of shattering is a lot higher.”

When swathing, timing is also critical as swathing too early can cost yield and increase the potential of green seed. Waiting too long can result in higher shattering losses during swathing. “Trying to time operations when canola has reached the appropriate stage is important with either harvest method,” says Holzapfel. “But it is about logistics, and growers have to manage their own farms as best they can.” With large acreages, variable weather conditions and labour considerations, timing can be a challenge. Some large growers use both swathing and straight combining, swathing as much as possible and then moving to straight combining if the canola is ready and the potential for swathing shattering losses is higher.

In 2011-12 straight-combining trials, the average environmental seed losses ranged from less than one per cent to 21 per cent at “optimal” harvest time, and less than one per cent to 57 per cent when harvest was delayed three to four weeks. Total losses averaged across all straight-combined sites and cultivars were 5.5 per cent at “optimal” time and 17.4 per cent with delayed harvest. In previous research comparing swathed and straight-combined canola, the average environmental seed losses from straight combining at the optimal time were five per cent or less, but typically did not reduce canola yield as the losses were often offset by increased seed size of six per cent (see Fig. 2, below).

The results of a two-year, three-location pod sealant research study showed the product may be beneficial under certain circumstances, but didn’t show a consistent return on investment in the trials. “Pod sealants can be a risk management tool; however, it is very difficult to predict the likelihood of being successful, and the cost of application is another factor to consider,” explains Holzapfel. “Growers considering using a pod sealant should leave a check strip for comparison and understand that they are not guaranteed to see an economic benefit.”

Pre-harvest glyphosate is not a necessity but can also have advantages in some cases. The research trials did not show a consistent impact on seed yield by using glyphosate. “I have had a lot of success without pre-harvest glyphosate, but it can be a way to even out maturity and if there are weed problems, can provide the benefit of weed control,” says Holzapfel. “One of the things I like about glyphosate with straight combining is it works slowly and won’t dry out the pods or add much risk of shattering. Other options such as Reglone are very effective, but the cost is higher – you don’t get weed control and it works very quickly so you have to be ready to go.”

In a new four-year study initiated in 2011, Holzapfel expanded research on cultivar considerations for straight combining. The trials are evaluating potential for pod shattering and pod drop amongst 12 commercial cultivars across all herbicide systems, including some of the new shatter tolerant varieties. Preliminary study results show significant varietal differences are frequently detected, but not always consistent from site to site. Substantial losses in all cultivars occurred when severe conditions were encountered and the opposite was generally true under more favourable conditions.

“In years where losses were low, all of the cultivars evaluated performed pretty well,” says Holzapfel. “However, in years where conditions were challenging, such as the severe wind events in 2012 and higher than usual sclerotinia incidence, all of the cultivars were impacted and we had severe losses in all treatments. The wind events also caused severe damage to a lot of swathed canola across the Prairies and encouraged some growers to take a closer look at straight combining in 2013.” Several cultivars with improved shattering resistance are scheduled for release within next few years (see Fig. 1, below).

Although any header can be used for straight combining, there are some special headers that have shown some benefits. An earlier study from 2005 to 2007, conducted at Swift Current by Wheatland Conservation Area Inc., evaluated header losses and seed yields from canola straight combined using various header types. The BISO extension performed the best, showing lowest losses and highest yields, followed by the draper with a slight improvement over the rigid header. The stripper header was used only one year and was not successful with canola harvesting (see Header Effects graph, below).

“We would like to see more research on special headers such as those available from BISO and Zurn for rapeseed/canola,” says Holzapfel. “A next-generation model from BISO is expected to be more flexible, with the ability to harvest canola, cereals and soybeans. Everyone has different preferences and the key is to optimize the equipment you are working with. It will come down to preferences, actual conditions being encountered and individual farm management.

“For example, with dry canola, many growers find pea augers to be highly effective for moving the canola into the feed housing and keep the combine moving quite smoothly. However, under tough conditions or with particularly green stems, canola can wrap on the pea auger and really slow down progress,” he adds. “It is not uncommon to hear conflicting testimonials about equipment options from producers who have experience with straight-combining canola.” 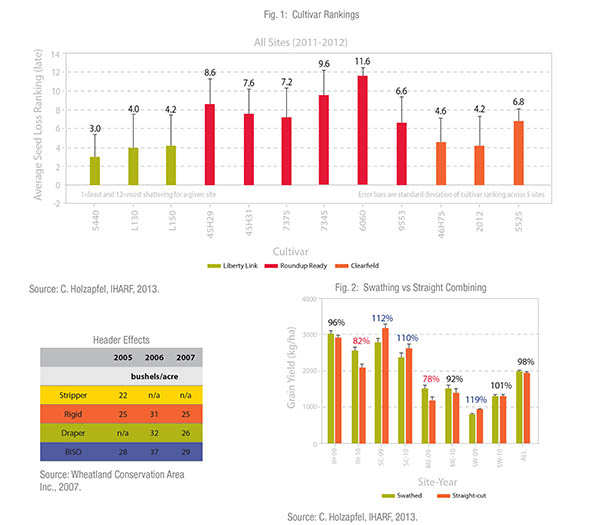 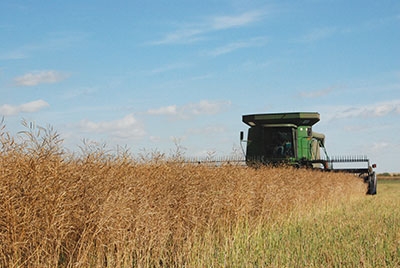 There are risks and rewards with straight-cut canola. Canola harvest management starts with planning ahead and getting it right in the spring. Everything else will follow