A new study, co-authored by Tiequan Zhang, a soil fertility and water quality expert at Agriculture and Agri-Food Canada’s Harrow Research Station in Ontario, Chin Tan (another research scientist at Harrow) and others, shows that adding compost to tile drained systems can exacerbate P loss. 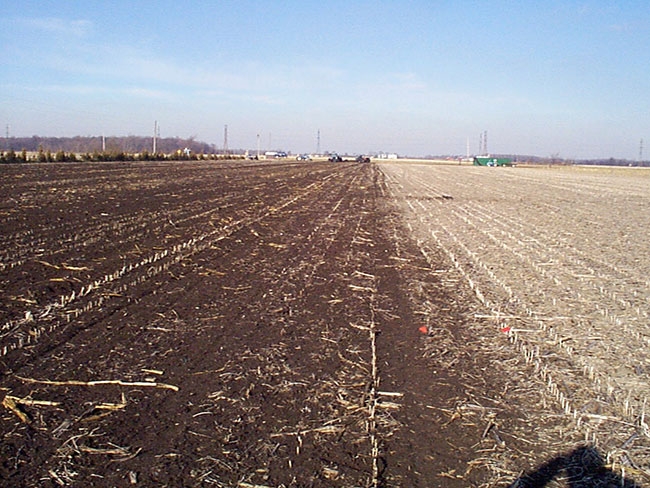 A field treated with compost on one half and without compost on the other half. A new study

A three-year, on-farm trial compared the effects of adding leaf compost to soil on two different operations, both with established, long-term tillage systems – one a zero-tillage system, one a conventional tillage system.

Overall, the addition of leaf compost led to an increase in total P loads in tile drainage water by 57 per cent under conventional tillage and 69 per cent under zero tillage. At least when it comes to mitigating P loss, systems that use some tillage – either rotational tillage or reduced tillage– are better than zero-tillage systems, Zhang says.

One of the major reasons for the dramatic P loss in no-till soils is a phenomenon called stratification, he explains. Whatever P is added to these soils in the form of leaf compost stays on the surface of the soil. When soil is tilled, this P can react with soil components and less P is available to run off.

A second reason P loss is higher in no-till soils is that these soils have higher porosity from cracks, root channels and earthworm activity, meaning tile drainage flow volume is higher.

Zhang’s research does not suggest that producers should abandon zero tillage – it simply highlights problems that can result from the addition of compost to these systems in Ontario.

Vertical tillage can be a good compromise for soils that receive a lot of rainfall, because it helps break down stratification and helps P bind to the soil while minimizing soil disturbance, he says.

Zhang also suggests producers “close the loop” of water use on the farm by adding control structures or riser pipes to their tile drainage systems, to control the water table while retaining water for use by the crops in the summer months and mitigate nutrient loss to the environment.

Tan says it’s key to use drainage controls. When producers add compost to zero-till soils, “they create a lot of channels moving down so that when heavy rain occurs they have more water that channels through the subsurface tile, and a high nutrient load ends up in there, creating an environmental problem.”

Zhang says the leaf compost study suggests that when best management practices are developed for organic amendments for soil quality improvement, soil nutrients should also be considered, but there are no guidelines for this in Ontario.

Zhang and Tan are involved in discussions with Ontario’s Ministry of Environment and Climate Change on whether the Ministry can support further work to validate and standardize environmental impact assessments for soil P loss for producers.