Seeding rates for cereal crops under irrigation in Saskatchewan are currently recommended at 250 plants per square metre. However, recent research trials under irrigation led by Dr. Ross McKenzie in Alberta found higher seeding rates for several classes of wheat could be a benefit to growers. Based on the Alberta results, the Irrigation Crop Diversification Corporation (ICDC) initiated a project to determine whether the recommended irrigated seeding rates for wheat and durum in Saskatchewan were still appropriate.

“In 2010, we initiated a project to look at all classes of spring and durum wheat including a number of varieties,” explains Garry Hnatowich, ICDC research scientist, at Outlook, Sask. “We compared seeding rates of 100, 200, 300, 400 and 500 seeds per square metre. All other agronomic practices remained the same. The results from 2010 showed that only two classes, soft white spring (SWS) and durum wheat showed any significant yield increases, so in 2011 we decided to concentrate the research on these two classes of wheat.”

Although the yields of other wheat classes did increase with increasing seeding rates in 2010, the results were not as significant, so hard red spring wheat, Canada Prairie Spring and general-purpose wheat classes were dropped from the project.

The seeding rate study with SWS and durum wheat continued for three years, from 2011 to 2013. Researchers are still finalizing the data, but based on preliminary analysis, there are some interesting results.

SWS yields may benefit from higher seeding rates
Preliminary results for SWS are quite different from durum wheat. The results show yield responses up to double the current seeding rate recommendation. Although 2013 was an outstanding year and may have had a bit more influence, the average over the three years of the study showed that yields increased up to about 400 to 500 seeds per square metre. The yields continued to increase past 500 seeds per square metre but were not as significant.

“We still need to complete our analysis and economics on the results, but the preliminary results for SWS wheat show there is an advantage to moving up to a higher seeding rate,” says Hnatowich. “With SWS, there was no real lodging response until seeding rates moved above 400 seeds per square metre. Above that level, the lodging rate did rise and in fact doubled, moving from a 2 to a 3 rating, which is still within a manageable lodging tolerance for harvestability. Therefore, increasing seeding rates for SWS may be a benefit for increasing yields.”

Other results of increased seeding rates for both durum and SWS wheat were decreased protein, reduced days to maturity and increased plant growth.

Hnatowich adds that they did also compare varieties of both durum and SWS wheat for lodging. Across all varieties in all years, every variety responded in a similar manner. “We looked at a number of varieties; however, at no time in any of the three years was there a statistically significant variety effect on lodging. We did expect some differences in varieties, but in this project they all behaved identical and we did not see any significant differences.

“Once we have completed the economic analysis, we can provide better seeding rate recommendations for growers,” adds Hnatowich. “Growers will also have to decide whether higher seeding rates are a benefit to their system. Along with the added seed cost, there are timing decisions to consider. An increase in seeding rates from 250 to 300 or more seeds per square metre is a significant increase in the amount of seed in the cart and may create some seeding time delays. Therefore, growers have to assess if the potential yield gain benefits from increased seeding rates will fit in with their current production practices.”

As a follow-up study to seeding rates, Hnatowich would like to look at strategies such as growth regulators as a way to manage the lodging issue for classes of wheat such as durum. “We would like to determine if the use of a growth regulator coupled with high nitrogen rates could improve crop standability and provide an accelerated yield response across several classes of wheat. We can then provide better recommendations for growers for cereal crops under irrigation.” 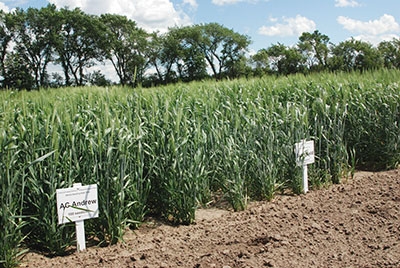