June 19, 2019
By Presented by Don Flaten and Amy Mangin, University of Manitoba, at the Soil Management and Sustainability Summit, Feb. 26, 2019, Saskatoon.

Where did this project come from? The current provincial guidelines for crop fertilization in Manitoba do not address the high yield potential of the current varieties of spring wheat that can exceed yields of 90 or 100 bushels an acre. The existing recommendation of 2.5 to three pounds of total N (soil reserves plus fertilizer) per bushel of hard red spring wheat means you would need a total of 200 to 300 pounds of N for 100 bushels of spring wheat. That means a very large financial, agronomic, and environmental risk.

Let’s look at our so-called “current” information in Manitoba. With CWRS Neepawa wheat in the early 1970s, we had a potential of maybe 45 to 50 bushels per acre maximum yield in Manitoba studies. That’s not the same as the yield potential we have now with current varieties. To come up with recommendations that are relevant to today’s yield potential, we had to revisit something as basic as nitrogen fertilization.

The research questions that we attempted to answer in this project:

We set up our experiment in southern Manitoba. Eight site-years of field trials were conducted with two high yielding wheat varieties: AAC Brandon (Canadian Western Red Spring class, CWRS) and Prosper (Canadian Northern Hard Red class, CNHR). High intensity “Gold-level” experiments were conducted at Carman and Brunkild during both seasons (4 site-years) and managed by the University of Manitoba (U of M). Less intensive “Silver-level” experiments were conducted at Melita in both seasons, Carberry in 2016 and Grosse Isle in 2017 (4 site-years) and were contracted out to provincial and independent research stations. 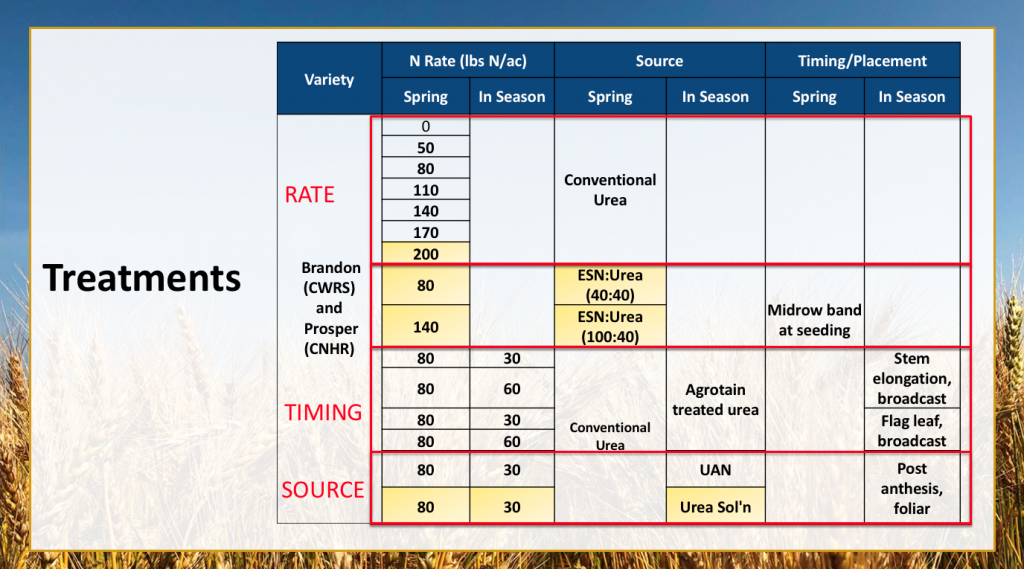 How much N do high-yielding spring wheat varieties really need?

The first question was do our new varieties really need two-and-a-half or three pounds of N per bushel?

The Gold-level sites all had between 40 and 50 pounds of residual soil test nitrate-nitrogen to start off the growing season. The optimum economic fertilizer rate at each of our four Gold-level sites was 140 pounds of N on top of the 40 to 50 pounds of residual soil N. The total N for the soil plus the fertilizer was anywhere between 180 and 187 pounds of N per acre. Our optimum yields were quite variable, anywhere between 62 and 110 bushels per acre, with the lowest yielding site impacted by a midsummer hailstorm. The typical total amounts of nitrogen (soil plus fertilizer) for the crops that were not damaged by hail were about two pounds of N per bushel of yield at the optimum N rate. 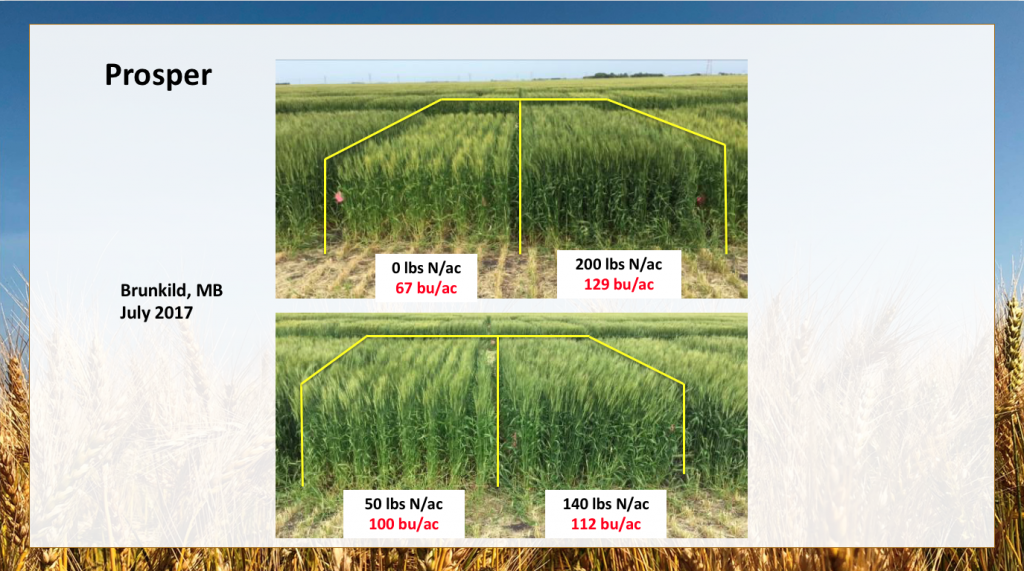 The Silver-level sites had spring nitrate soil levels ranging from 11 to 89 pounds of residual nitrate-N. At Carberry for example, because of the high residual nitrogen of 89 pounds per acre, and a large amount of mineralization at that site, it only took 50 pounds of fertilizer N to reach our optimum economic yield. We achieved 95 bushels of wheat per acre with only 50 pounds of additional N applied per acre.

Across all sites, two pounds of N per bushel measured as the total combination of soil test nitrogen at the beginning of the growing season plus the amount of fertilizer applied was a pretty good rule of thumb to estimate what was needed to reach optimum economic yield.

Can we increase nutrient use efficiency (NUE) by altering N source and application timing?

The Gold-level sites had a comparison between an ESN blend and urea applied at planting. We measured no differences in NUE, but 2016 and 2017 in Manitoba were a little drier than average. If we didn’t have losses because of leaching or denitrification, we didn’t really need an enhanced-efficiency fertilizer. Banded urea is pretty stable and secure in a relatively dry growing season. The ESN blend didn’t benefit protein content either, but once again we wouldn’t have expected much difference given the relatively dry growing seasons. 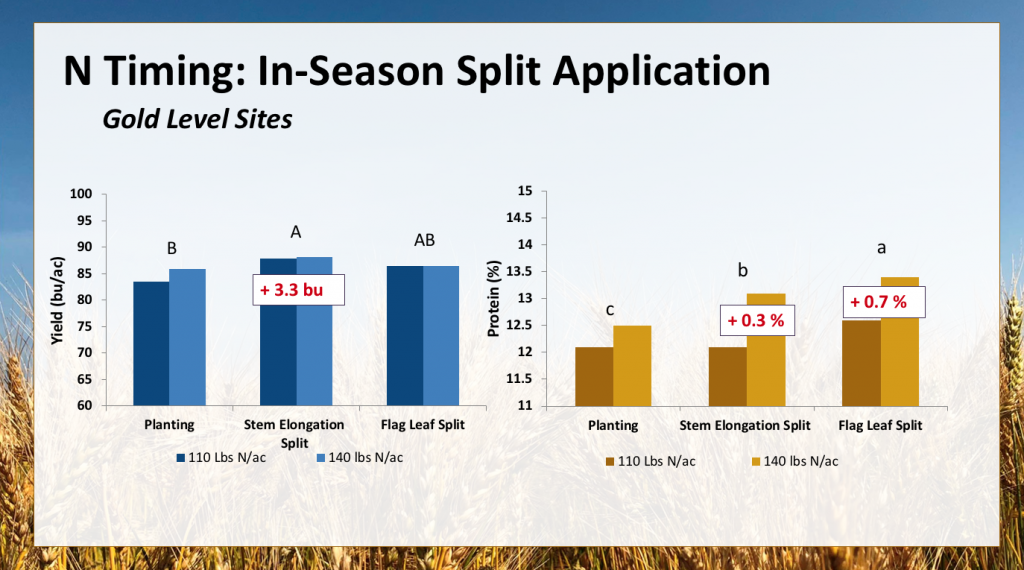 At Silver-level sites, the split application didn’t produce any significant differences in yield, compared to applying all the N at planting. And that’s actually good news, because if you can delay your timing of application until you have a better idea of growing conditions and yield potential, that’s a good way of managing risk.

With protein content at the Silver sites, delaying the application of nitrogen till flag leaf resulted in a significant increase in protein of 0.4 per cent for the same amount of nitrogen that would have been applied either all at planting or a combination of planting and stem elongation.

However, the success of our mid-season applications needs to be interpreted in the context of our plots receiving timely rainfall, shortly after application. For example, in our trials at Brunkild in 2016 and 2017, our stem elongation applications were followed within a few days with a decent amount of rainfall. We had the same type of precipitation with our flag leaf applications. If you don’t get rainfall after a mid-season application, you can get stranding of your nitrogen fertilizer and it can be completely useless. Guy Lafond and Chris Holzapfel have found that on occasion at Indian Head, Sask. Rigas Karamanos also found that with some spring wheat fertilization trials in Alberta and Saskatchewan.

We also applied N fertilizer after flowering (anthesis), which generally has been used as a method to increase protein content only. At this point in the growing season we wouldn’t expect there to be much influence of the fertilizer on yield. Therefore, we compared 80 pounds at planting plus 30 pounds N at post-anthesis to the base rates of either 80 or 110 pounds of N applied all at planting.

Post-anthesis application, spraying nitrogen on plant leaves, is a dangerous business because you can burn your crop. The source of N was diluted UAN solution (28-0-0 diluted 50:50 with water to 14 per cent N solution) and a urea solution (dissolved in water to 9 per cent N solution). With these dilute rates and applications in the late evening, at our Silver sites, even with all those precautionary measures, we ended up with a yield depression with the post-anthesis nitrogen as UAN. The split application with 30 pounds of post-anthesis knocked down the yield by 3.3 to 7.1 bushels per acre. The post-anthesis applications at the Silver sites increased protein content by about four per cent, but burning your crop and decreasing the yield to get a protein increase is a pretty extreme measure.

The dissolved urea was less harsh on the leaves and had a yield advantage of about 4 bushels per acre compared to the diluted UAN. Protein content was also increased with a dilute solution of urea by 0.6 per cent compared to UAN. We saw less leaf burn and more effective uptake for both yield and protein with the dilute urea solution. 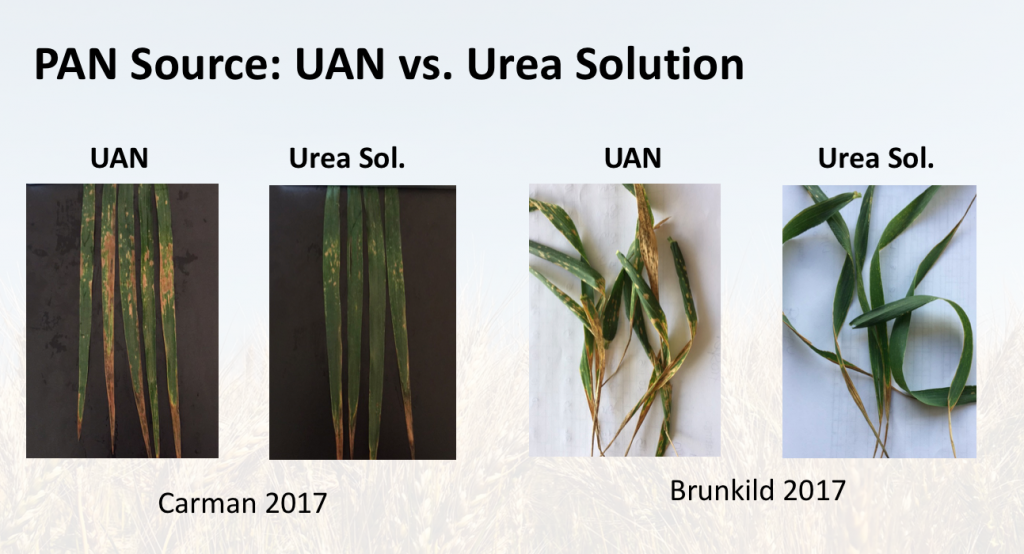 Can we estimate the amount of organic N coming out through mineralization?

A question that we wanted to address was to predict mineralization of the soil’s organic nitrogen during the growing season. Mineralization potential and the amount of mineralization that actually occurs vary a lot depending on the management history, soil type, and all sorts of other factors. We wanted to see if we could find some tools that would help us to predict how much nitrogen would come out of that soil organic matter.

Professor Emeritus Les Henry at the University of Saskatchewan has suggested that we could use an incubation test, basically just leave a soil sample to sit for about a month at room temperature and see how much nitrogen comes out of that sample, just in its natural condition before sending it into the soil test lab. We’ve done some work with that and it worked super well in the growth chamber, but as soon as we go out to the field, the variability in moisture and temperature conditions over a whole growing season causes that relationship to break down.

There’s a soil test extraction procedure using sodium bicarbonate (baking soda) to get some of the more active organic matter fraction out. Even though it has worked in some research in Nova Scotia and it worked very well in some of our growth chamber tests, too, it didn’t work in our field trials during the growing season.

The Solvita test with carbon dioxide burst is commercially available and measures the response of the microorganisms to being rewetted after the soil has been dried. That’s an indication of microbial activity. But we found no relationship between that test and the amount of N mineralized, and if there was a weak trend for any relationship, it was negative.

Can we estimate N sufficiency for yield and protein during the growing season?

So what other tools might we be able to use, especially considering the variability within the growing season? We evaluated mid-season measurements. These were only rudimentary studies, but we wanted to see the relationship between these measurements and yield in the nitrogen rate trial portion of our experiment. We used GreenSeeker for measuring the normalized difference vegetation index (NDVI) in the crop canopy and a SPAD meter for leaf chlorophyll content at various points in the growing season – stem elongation, flag leaf, and anthesis. We also measured flag leaf N content, using a laboratory chemical analysis.

When we pooled all site-years for the GreenSeeker measurements at flag leaf or anthesis, the flag leaf measurement of NDVI had a pretty decent relationship with grain yield. This NDVI measurement also coincided with a period of time when we could apply nitrogen and get good yield and protein responses. But when we tried to use NDVI to predict protein content, the relationship between NDVI and protein content was very poor.

When measuring chlorophyll with the SPAD meter, there was a fairly strong relationship at some sites, but when we combined all site-years, the yield relationship wasn’t that strong and the protein relationship disappeared completely. So if you just walked out onto a field, you wouldn’t have a very useful tool to measure protein content using the SPAD meter either.

When we looked at actual flag leaf nitrogen content at an individual site, it seemed to be strongly related to yield potential and protein content, but the relationships broke down as soon as we combined the eight site-years. We had very poor results in terms of predictability of yield and even poorer predictability of protein.

A final tool that we looked at was measuring post-harvest soil nitrate-N levels right after harvest to see how much nitrogen was left over, after growing the wheat crop. At the Gold-level sites residual nitrate-N levels varied from 22 to 53 pounds of N per acre, for the treatments with the optimum rate of 140 pounds of N per acre. The Silver sites were tighter-grouped and ranged from 29 to 45 pounds of leftover nitrate-N at the optimum economic yield. So, if a wheat grower has over 60 pounds of leftover nitrogen, they probably had more nitrogen than the crop required for optimum yield and protein in that particular year.

Something as simple as a post-harvest soil nitrate test may be useful in terms of identifying whether you hit your target nitrogen rates reasonably well, or whether that field or management zone may need some adjustments. Monitoring post-harvest residual-N over the longer term could be a way to help fine-tune N fertility practices.

More from the 2019 Soil Summit

Watch Don Flaten summarize the key findings of the research and what it means for farmers and agronomists in his Speaker Spotlight video. To see other presentations and speaker spotlight videos, visit our archives for the 2019 Soil Management and Sustainability Summit.