Yields of 80 bushels per acre or more call for new strategies. 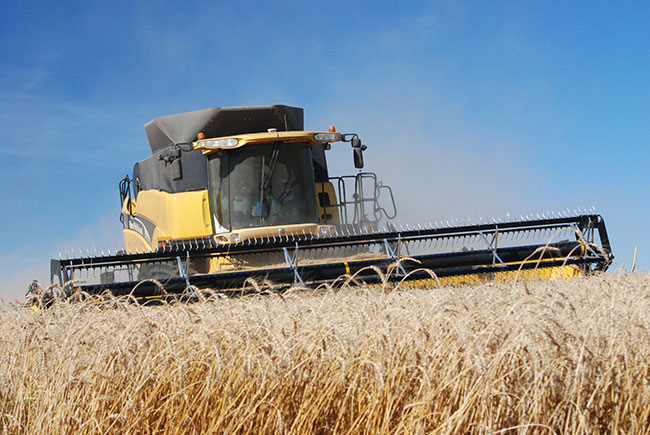 The average wheat yield in Manitoba has come a long way since the 1970s when yields were around 30 bushels per acre (bu/ac). Today, wheat yields sometimes top 100. Provincial fertilizer guidelines haven’t kept up, though. The Manitoba Soil Fertility Guide provides nitrogen (N) recommendations for spring wheat yields up to 50 bu/ac based on University of Manitoba (U of M) research conducted in the 1970s.

“The standard recommendation for spring wheat is 2.5 pounds of N per bushel target yield. At those recommendations, an 80-bushel wheat crop would require 200 pounds of soil and fertilizer N,” says Don Flaten, professor of soil science at the University of Manitoba.

Flaten and Amy Mangin, also with the department of plant science at the U of M, conducted research in 2016 and 2017 to see if those recommendations from the 1970s still held up with today’s high-yielding wheat varieties.

“There is a large financial risk for wheat growers when using those kinds of rates, as well as agronomic and environmental risk such as lodging, leaching, or nitrous oxide emissions,” Mangin says. “High yields can also mean that protein content may be below the 13.5 per cent threshold for protein premiums without high enough N fertility.”

Economic optimum rates were determined using a five-year average price for urea of $0.43 per pound of N and wheat prices in southern Manitoba on Jan. 8, 2017. Fertilizer rates that hit maximum yield were not always the most economic. For example, at Melita, Man., in 2016, Mangin says that the maximum yield was hit with 110 pounds of fertilizer N plus 43 pounds of soil N, but the maximum economic yield was with 80 pounds of fertilizer N per acre.

“Excluding the hail-damaged site at Carman 2016, the average total N supply at the optimum yield and protein content was two pounds of nitrogen per bushel, which is less than the current recommendation of 2.5 pounds of nitrogen,” Mangin says.

In addition to the right rate of nutrients, the three other pillars of 4R nutrient planning are timing, placement and source. The research also looked into these variables. In-season N application timing compared a base rate of 80 pounds per acre N at planting with an additional 30 or 60 pounds N applied at stem elongation or flag leaf timing as broadcast Agrotain-treated urea.

Mangin says in-season application is a strategy used to try to match fertilizer uptake with crop demand in the hopes of improving fertilizer use efficiency and minimize risk of losses. She says that there weren’t any decreases in yield from delaying a portion of N application to stem elongation or flag leaf stages compared to equivalent N rates applied entirely at planting.

“These results indicate that it is possible in Manitoba growing conditions to delay a portion of total N applied into the growing season without detrimental effects to final grain yield or protein,” Mangin says. “Additionally, applying N as late as the flag leaf stage may allow for increased grain protein content compared to when N is applied entirely at or near planting.”

Rain is a good thing

Mangin cautions that rainfall after application is necessary for split applications to be successful. In the two years of this study, a rainfall event of at least five millimetres occurred within one week of N application. Also, the split application utilized Agrotain-treated urea to minimize volatilization losses.

“Rainfall after application is likely a major contributing factor to the success of the midseason N applications in this study. If we hadn’t had the rainfall, we might have had different results,” Mangin says.

Other research supports the need for rainfall shortly after a split application in order to maintain or increase yield and protein content compared to all fertilizer applied at planting. Research published by Chris Holzapfel at Indian Head, Sask. in 2007 evaluated delayed N fertilizer application in Saskatchewan for canola and spring wheat. The research found no effect on spring wheat grain protein content, but measured reduced yield in one of three years due to very dry conditions following the midseason application.

Post-anthesis (post-flowering) N application of 30 pounds N per acre was also applied in addition to a base rate of 80 pounds that had been applied at planting. The post-anthesis N applications were foliar-applied using flat fan herbicide nozzles as diluted UAN (diluted 50:50 with water to 14 per cent N solution) at both Gold and Silver sites, while Gold sites had an additional treatment using dissolved urea solution (nine per cent N solution). Post-anthesis, foliar applications of N are typically used as a method to increase grain protein content rather than yield due to the application timing being so late in the season.

“We saw higher protein and yield with the urea solution. It appeared to be easier on the crop. Urea solution did result in lower levels of leaf burn compared to UAN, but it was applied at a slightly higher water volume, which could have contributed to crop safety,” Mangin says, adding while post-anthesis foliar N application did increase protein content, the strategy is difficult to implement because it is hard to predict if protein content would have been high enough for protein premiums if adequate N fertility had been applied at seeding. Additionally, post-anthesis applications may still not help the protein content meet premium levels, depending on environmental growing conditions.

ESN blends produced grain yield, protein, N uptake, and N removals that were similar to those for conventional urea when applied midrow banded at seeding. Mangin says conditions at seeding were generally dry, and that if conditions had been wetter and more favorable for early season losses, there may have been an advantage to using ESN fertilizer.

“At two pounds of N per bushel of wheat produced, compared to the former rate of 2.5 pounds, we see that along with an increase in yield potential comes an increase in nitrogen use efficiency,” Flaten says.