For yield and protein, stick with the tried and true. 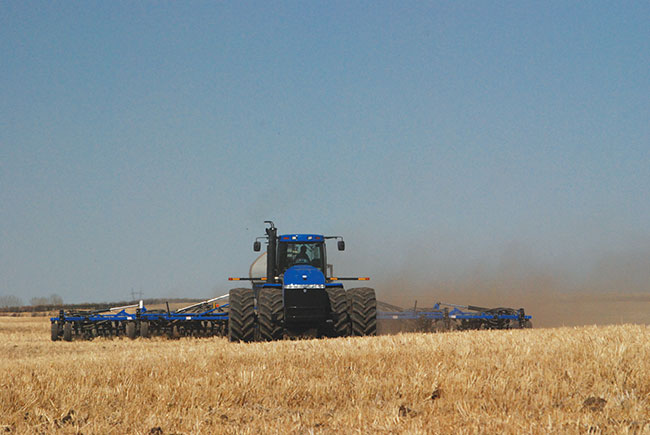 Applying all of the nitrogen at seeding was always as good as or better than splitting applications. Photo by Bruce Barker.

Over the last decade, spring wheat yield potential has increased, and research has focused on how to maximize this yield and maintain adequate protein content levels. This has led to research on whether late season application of Urea Ammonium Nitrate (UAN; 28-0-0) or dissolved urea (46-0-0) can help maintain or boost protein content.

“When you look at 4R principles of nutrient stewardship – the right rate, time, source and place – there may be an opportunity to apply most of the nitrogen early in the season, and then follow up later with some form of nitrogen to increase protein content,” says Mike Hall, research co-ordinator with Parkland College and the East Central Research Foundation in Yorkton, Sask.

To test this theory, Hall and his colleagues at AgriARM sites in Indian Head, Melfort, Outlook, Prince Albert, Scott, Redvers, and Swift Current, Sask., looked at the impact of late-season N on wheat yield and protein from 2018 through 2020. The work in 2018 was funded by the Saskatchewan Ministry of Agriculture’s ADOPT program, whereas the work in 2019 and 2020 was funded by the Saskatchewan Wheat Development Commission.

However, Hall says that none of the split applications were any better than putting all the N down as a sideband at seeding. This finding was similar to research by soil scientist Ross McKenzie, who found that, in 26 site-years across the Prairies from 1998 to 2000, putting 67 lbs. N/ac (75 kg N/ha) at seeding was just as effective as a split application of 53 lbs. N (60 kg) at seeding followed by broadcast ammonium nitrate (36-0-0) of 14 lbs. N (15 kg) at tiller, boot or anthesis. The protein increases were also not economic at most sites. McKenzie concluded that in-crop applications were less reliable than applying additional N fertilizer at or before seeding.

In 2018, the same approach was conducted at the AgriARM sites but with a base rate of 100 lbs. N/ac sidebanded, with a split application of an additional 30 lbs. N at the same timing. The main difference in results compared to the base rate of 70 lbs. N was that the protein increase was about 0.6 per cent as compared to 0.8 per cent.

“Basically, there was more N in the system, so you reach a point of diminishing returns for the additional N applied, but the results were pretty much the same,” Hall says. 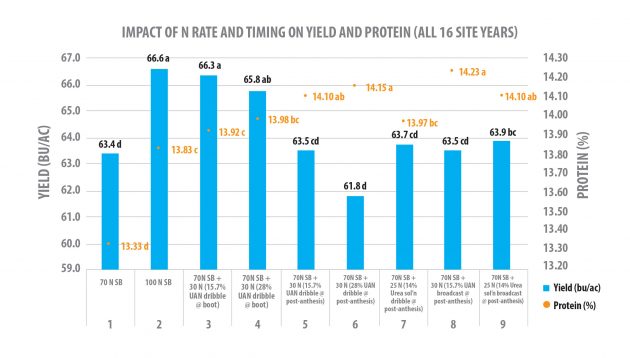 Over the two years, there were significant differences between treatments. (Same letters represent statistically similar results.) 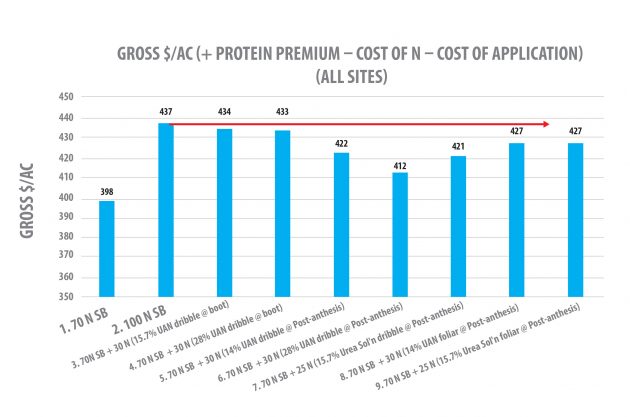 When economic return for the 16 site-years was analyzed, none of the split applications were shown to generate as much income as putting 100 lbs. N down at seeding. Graphs courtesy of Hall et al.

Split applications no better than sidebanding at seeding
In 2019 and 2020, the AgriARM sites conducted a similar trial but included dissolved urea (melted).

The base rates were 70 and 100 lbs. N/ac. UAN was additionally dribble-banded to the 70 lbs. N rate at the boot or post-anthesis stages, at either full strength (28 per cent N) or cut in half with water (15.7 per cent N), with both rates delivering 30 lbs. N/ac. UAN (15.7 per cent N) was also broadcast at post-anthesis at 30 lbs. N. A fourteen per cent urea solution, delivering 25 lbs. N/ac, was also dribble-banded or broadcast-applied at post-anthesis. The intent had been to compare melted urea at a rate of 30 lbs. N/ac, but a calculation error resulted in only 25 lbs. N being applied at all sites in both years.

“Despite the calculation error, there are a lot of good insights with the results from this study, and I think the findings are still very relevant,” Hall says.

Over the two years, there were significant differences between treatments. Simply adding an additional 30 lbs. of N sidebanded at seeding to the 70 lbs. N base rate significantly increased yield by 3.2 bu/ac and grain protein content by 0.5 per cent. This yield was significantly higher than all other treatments except the UAN (both concentrations) applied as a dribble band at the boot stage, which tended to increase protein a little bit but also tended to result in a little less yield, Hall says.

Leaf damage was significantly lower for the boot stage applications compared to the remaining post-anthesis timings. Among the post-anthesis timings, broadcast spraying UAN caused the most damage, but Hall cautions that the lower rate of N with dissolved urea might have played a role.

The 16 site-years were analyzed for economic return. The gross returns minus the variable cost of added nitrogen minus the additional cost of applying a split application was calculated. A base price of $5.84 per bushel for 12.5 per cent protein wheat was assumed, along with a protein premium or discount of $0.60 per one per cent per bu (/%/bu) and an N cost of $0.50/lbs. regardless of product used. In addition, an extra cost of $5/ac was added for all split applications.

When all the sites were combined, none of the split applications of N generated as much income as putting 100 lbs. N down at seeding. Hall also divided the 16 sites into the top eight and bottom eight yielding sites to see if there was a difference in yield, protein or economic response. He found the trends similar to the combined 16 site-years.

“Overall, I still hold the opinion that split applications of N to raise grain protein should be viewed as a rescue treatment for an under-fertilized crop, rather than a planned practice,” Hall says.