Demand has been growing for Dow AgroSciences’ Nexera canola because of the oil’s special qualities, which include natural stability and high levels of heart-healthy omega-9 fatty acids. Frito Lay Canada’s recent adoption of this oil could be the first step in a whole new level of demand.

And that bodes well for the western Canadian canola industry. With a premium price and solid yield potential, Nexera canola is likely to appeal to many growers for the 2012 season. “We think we have the most profitable canola that a farmer can produce,” says David Dzisiak, commercial leader. Grains & Oils for North America at Dow AgroSciences.

Steven James, senior director of Purchasing with PepsiCo and Frito Lay, explains that at one time Frito Lay had used regular canola oil. However, regular canola oil has to be hydrogenated to provide the extended shelf life needed in the food industry. Unfortunately hydrogenation creates trans fats, which increase the risk of heart disease.

As an early adopter of zero-trans-fats food manufacturing, Frito Lay had switched to other oils, using mainly sunflower oil and some corn oil in its snack food products. “Dow AgroSciences’ work on the omega-9s brought a canola oil back into the market of oils that we could use and still achieve the nutritional profile of very low saturated fats and zero trans fats – that was a must-have in our program,” says James.

Along with its health attributes, Nexera canola oil has a suite of other characteristics important to Frito Lay. The oil’s natural stability maintains product freshness, and the oil works well in Frito Lay’s processing system. As well, there’s an assuredness of supply, with the increasing acres of Nexera canola and the expanding capacity of the canola crushing industry.

And most importantly, the oil meets Frito Lay’s taste requirements. James explains: “Taste is the trump card for brands like ours that consumers tend to interact with fairly frequently. They never want you to go backwards in taste. Make it better, but you also need to be very clear that what you think is better and what they believe is better is the same thing. So we do a lot of consumer testing before we ever make a change to a major brand. You have to be absolutely sure that the people who love and use your brand every day are acknowledging and valuing
the change.”

Frito Lay Canada is now a big user of Nexera canola oil. “In the first quarter of 2010, we took all of our potato chip brands over to the omega-9s; that includes Lay’s, Ruffles, and Kettle brands. And in the first quarter of 2011, we included omega-9s in our corn products; that’s Doritos, Tostitos, Cheetos and a few others,” says James. He adds, “From a western Canadian perspective, this is new demand. Western Canada wasn’t providing any of the acreage for sunflower oil and very little to none of the acreage for corn oil. And all of the canola oil is essentially coming from Western Canada.”

According to Dzisiak, about five percent of Canadian canola acres were planted to Nexera canola in 2011, and Dow AgroSciences sees significant potential for increased acreage in 2012.
Frito Lay is North America’s single largest vegetable oil user, using about one billion pounds annually, and Nexera canola oil is already an important part of that total. What’s more, its proportion of that total could increase: according to James, the Canadian market was a pilot for Frito Lay’s use of this oil in its other markets. “We believe the Canadian canola oil industry has every right to be competitive with other oils that we’re using today, to continue to grow towards that billion pounds. Some of that will be in Canada, some in the U.S. and we think in some international operations as well.”

Frito Lay’s adoption of Nexera canola could be the start of another big boost in demand since Dow AgroSciences released the first varieties in the late 1990s. Dzisiak says, “At that time we had a very small program that was targeted toward the Japanese market, and we were very early in our breeding. Then when trans-fat labelling happened in 2005, we had a very large program growth, as the food services industry began to move away from hydrogenated oils into these naturally stable oils. And then in the last year or so, we’ve been putting a lot of effort into the consumer packaged-goods product category, which is the largest part of the food business. So now we’re beginning to work with people like PepsiCo to introduce this ingredient there, and that is going to drive the next leg of the program.” Dzisiak also notes, “The use of canola oil in the U.S. has doubled over the last four or five years, and over 80 percent of that doubling has been from the high stability category, to replace hydrogenated soybean oil.” However, the vegetable oil industry is strongly competitive and, with high-stability soybean varieties coming along, the canola oil industry can expect continued competition.

For growers
Nexera canola is grown under an Identity Preserved contract with a buyer. Dzisiak says, “We have a very broad network involved, including Louis Dreyfus, Richardson, Bunge, Viterra, and ADM. So there are many local options that producers can tap into to take a look at the program and understand what it can offer them.”

Yields are comparable to those for regular canola. Dzisiak says, “We are in the process right now with converting our whole lineup to hybrid canola. From the grower data and the strip trials by third parties, we have a very competitive set of hybrids that yield very comparably with what a farmer would expect from commodity canola.”

Those yields plus production premiums that are generally over $1 per bushel make Nexera of interest to many canola growers.

‘Four-way stacked win’
James calls Frito Lay’s adoption of omega-9 canola oil “a four-way stacked win” with benefits for not only for western Canadian canola growers and the company, but also for canola crushers and consumers.

Crushers benefit from the increased canola volume. Dzisiak explains: “Over the last two years, the crush capacity in the canola industry in North America has doubled, and there will be further expansion in the next couple of years. I think the increasing demand for Nexera canola has allowed these plants to operate at a much fuller capacity than perhaps they would have otherwise. So it’s been the right thing at the right time to really help with that capacity utilization.”

Consumers are getting taste and freshness plus nutritional improvements. “This is a good example of how agricultural plant science research has really created benefits for consumers. Nexera canola oil is very high in monounsaturated fats, which are very heart-healthy; they reduce bad cholesterol, and they increase good cholesterol. It has a similar fat profile to olive oil but with half the saturated fat,” says Dzisiak. 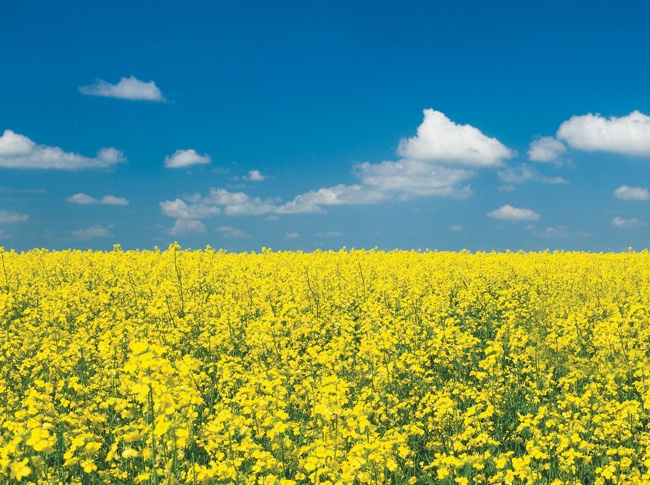 Nexera canola has yields comparable to commodity canola plus a production premium. Demand has been growing for Dow AgroSciences’ Nexera canola because of the oil’s special qualities