Inoculation with soybean rhizobia is essential for a first-time soybean field in Manitoba, but is it necessary for subsequent soybean crops in that field? To answer this question, a grower would need to answer some other questions, such as what is the current soybean rhizobia population in that field, and what population level would be sufficient for good nitrogen fixation in a soybean crop? A study led by University of Manitoba microbiologist Dr. Ivan Oresnik is working towards answers for such questions.

Rhizobia are soil bacteria that form symbiotic relationships with legume plants. When living in nodules on a plant’s roots, the rhizobia provide nitrogen to the plant. In turn, the plant provides the rhizobia with carbon and energy. The symbiotic relationship is very specific – each type of legume requires a particular bacteria species. For soybean, the species is Bradyrhizobium japonicum.

Oresnik’s study, which is funded by the Manitoba Pulse Growers Association, has two objectives: to develop a rapid assay to quantify B. japonicum populations in soil samples; and to investigate how B. japonicum populations develop in Manitoba fields after inoculation. In other soybean-growing regions, B. japonicum has been known to survive in fields for many years once it has become established, even if soybean is not grown on those fields. But it’s not known how well it will survive in Manitoba soils.

Dennis Lange, Business Development Specialist for Pulses with Manitoba Agriculture, Food and Rural Initiatives (MAFRI) has been helping with the field sampling for this study. He notes, “Soybeans are a relatively new crop for Manitoba, so we want to get more information about soybean rhizobia in Manitoba.”

MAFRI currently recommends that soybean growers always use an inoculant. Lange says, “It’s like relatively cheap insurance to make sure the soybean plants will get the nitrogen they need. Without the bacteria, you would have to apply nitrogen and it would be quite costly to do that. A soybean plant will use between 150 and 200 pounds of nitrogen per acre during a growing season. If you applied that much nitrogen in the spring, you would get too much growth. So you may get really tall plants, but by the time the plant starts [grain] filling, it may run out of nitrogen and that could reduce the yield and protein content. With the bacteria, the plant just uses nitrogen when it needs it.”

Lange is hoping that the assay being developed by Oresnik will help fine-tune soybean inoculant recommendations for Manitoba growers. “We’d like to get to the point where a farmer would be able to have his soil samples analyzed for the rhizobia and determine what inoculant application would be best.”

Developing a test for rhizobia levels
“In just a single gram of soil, any soil, there are thousands or tens of thousands of different bacterial species,” explains Oresnik. So the assay needs to be able to distinguish Bradyrhizobium japonicum from all the other bacteria in a soil sample and to count how many B. japonicum are in the sample.

Oresnik’s research team is using a technique called real-time quantitative polymerase chain reaction, or qPCR. This technique involves generating thousands or millions of copies of a piece of DNA so those copies can be used for things like genetic identification. Oresnik explains that, with a qPCR-based method, it would take a matter of hours to determine the population of B. japonicum in a soil sample. In contrast, the traditional approach, which involves inoculating plants and seeing how many nodules form, takes about four to five weeks and is very labour intensive.
The researchers are making good progress in developing the methodology for their qPCR assay. They currently are working on making it more precise, so that it identifies only B. japonicum and no other rhizobia species. Rhizobia are quite a big group of bacteria that includes 12 genera, such as Bradyrhizobium, Rhizobium and Mesorhizobium,  and over 60 species. Several species of Bradyrhizobium have been identified; Bradyrhizobium japonicum is the best known of these.

One reason for doing this whole-community analysis is that the assay has detected something that looks like B. japonicum in fields that have never had a soybean crop and have never been inoculated with B. japonicum. Oresnik thinks it might be an indigenous species that’s closely related to B. japonicum.

At this point, it’s not possible to say whether this B. japonicum-like species is good or bad for soybean production, even if it doesn’t fix nitrogen for soybean plants. Oresnik says, “We don’t really have a good idea of how these bacteria behave in a community of bacteria. For instance, you might have closely related species that associate with what’s around the plant root and they might be solubilizing things like phosphates and that might be beneficial to the plant.”

Oresnik describes another issue that could complicate identification of rhizobia species in the soil samples: “There are perhaps between 20 and 50 genes necessary for these [nitrogen-fixing symbiosis] traits. In almost all of the Rhizobium species and Bradyrhizobium species, there are what we call ‘symbiotic islands,’ where a lot of these genes go together as groups. And these symbiotic islands can move from [rhizobia bacteria] that you put in the soil to [some other type of bacteria] already in the soil. So the question is, if you do get an endemic [rhizobia] population in the soil, is it really the population that you want?”

The researchers are also working on relating the population counts from the assay to inoculant recommendations for growers. And they are determining proper soil sampling practices for the assay. Their preliminary results suggest it may be possible to use the same types of soil sampling practices that farmers use when collecting samples for soil nutrient testing. Oresnik says, “When growers are inoculating a field, they are applying up to about 105 or 106 colony forming units of the bacteria per seed roughly, or up to around 1011 bacteria per field. So the numbers are huge. I would guess that over a season the bacteria are going to be fairly homogeneous across the entire field.”

Those high numbers of bacteria help ensure that the inoculant bacteria will be able to compete against rhizobia already living in the field. But competition can be pretty tough in the rhizobial world. Oresnik says, “One of the problems that has traditionally happened with rhizobia competition is that you can end up with endemic populations that aren’t as robust at fixing nitrogen but are awfully good at competing, so they can outcompete the inoculant bacteria.”

Oresnik sees the potential to apply what they are learning about the rhizobial community in Manitoba fields to the development of better soybean inoculants. “We may find an endemic bacteria species related to B. japonicum in our soils that might be very robust at competing, and maybe we can come up with a hybrid strain that works a lot better in Manitoba soybean fields. 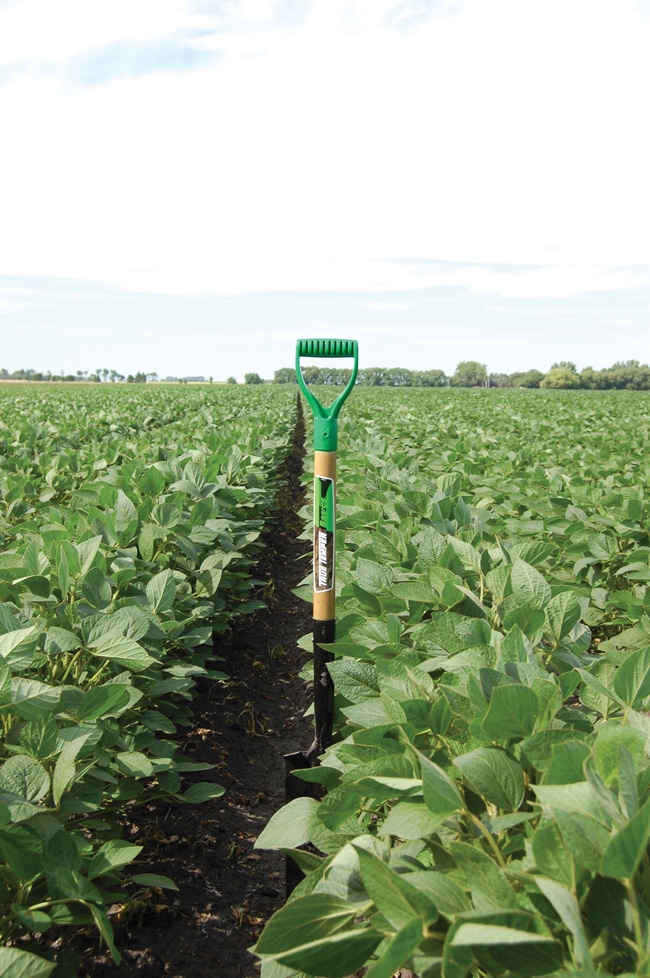