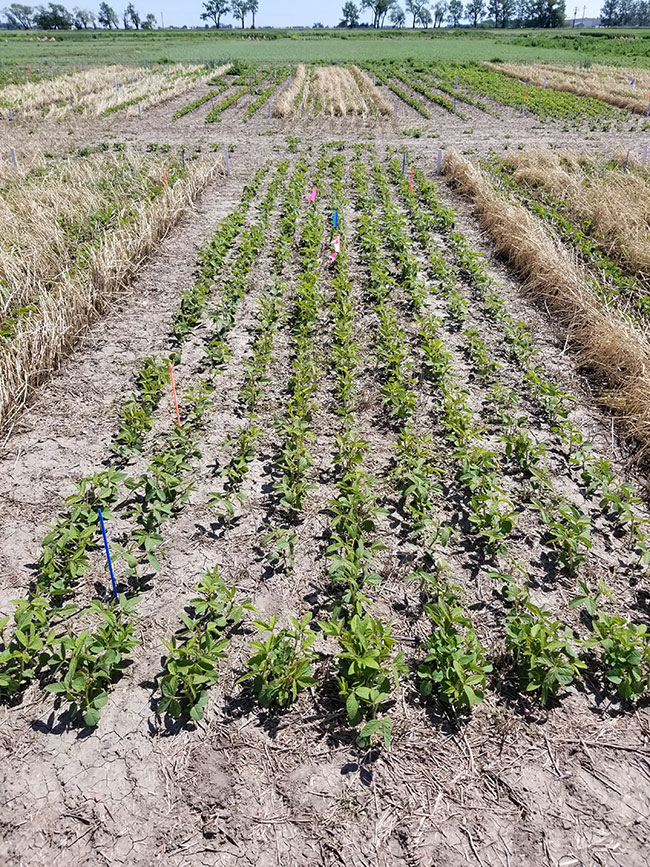 Trial plots at Lethbridge comparing the same soybean variety with a narrow row spacing and recommended seeding rate with vs. without the fall rye cover crop on July 3, 2020. Photos courtesy of Charles Geddes.

Geddes and research collaborators across Western Canada initiated a five-year project in 2019 to develop a strategy for IWM in soybean that could be broadly applied across the Prairies, including various tools for weed control. Chemical control, including the use of various varieties that offer herbicide-resistance traits, are widely used. Adding in other non-chemical tools that will help the crop be more competitive with weeds, improve yields and be economical for growers is the goal. Geddes is leading the project in collaboration with Rob Gulden and Kristen MacMillan, University of Manitoba; Chris Willenborg, University of Saskatchewan; and Chris Holzapfel, Indian Head Agricultural Research Foundation.

The first experiment was launched at three sites in 2019 to look at differences in phenotypes of soybean varieties under three different planting dates in both weedy and weed-free treatments. The experiment includes seven different cultivars across the range of growth habit and structure, and days to maturity. The cultivars vary from more bushy and branched growth habit to slender cultivars, as well as round leaf-type structure compared to a more lanceolate leaf structure. Researchers want to know if the different phenotypes affect soybean canopy closure, helping cultivars compete with weeds. 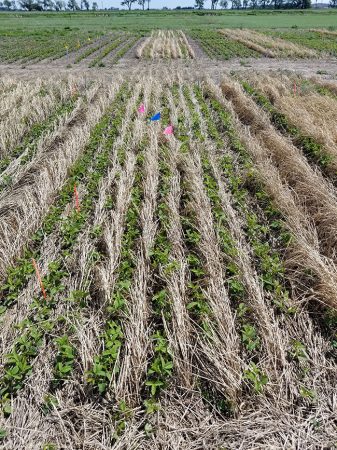 Trial plots at Lethbridge comparing the same soybean variety with a narrow row spacing and recommended seeding rate with vs. without the fall rye cover crop on July 3, 2020.
Photos courtesy of Charles Geddes.

“We also saw differences in days to maturity: in Manitoba the typical number of days to maturity was between the mid-90s and 120 days, while in Saskatchewan and Alberta the average days to maturity of the same cultivars was about one month later,” Geddes adds. “As expected, the yields were higher in the weed-free treatments, but we also found that higher yielding cultivars tended to yield higher under weed pressure as well. This is good news as it appears the traits breeders are selecting for in higher yielding cultivars are also making those varieties more tolerant to weed competition. We also saw some variability in weed management among some of the cultivars, but we need to have more data and results to fully understand the differences.”

The second experiment focused on the impact of preceding crops in rotation under different tillage systems. Four crops with different levels of residue were seeded in 2019, including wheat, canola, corn and soybean under either conventional till or zero-till systems. Soybean was selected as a low residue crop, although seeding soybean back-to-back is not a good idea from a weed selection point of view and disease pressure concerns. The four preceding crops with different herbicide programs will alter the weed community going into the soybean phase. In 2020, soybeans were seeded across all treatments at two different planting dates, either early or a more typical mid- to late May timing. Researchers wanted to know if the variability in crop residue of the preceding crop could impact the rate of soybean establishment, and if delayed establishment could impact the ability of the crop to compete with weeds. Research results are not yet available, but some visual observations indicate that, for crops seeded into higher residue under zero-till, there appeared to be less canopy closure compared to crops with the same treatments under conventional tillage or seeded into lower-residue fields.

The third experiment compared four different treatments including with or without a fall rye cover crop. Other tools for improving the competitiveness of soybean included a comparison of a bushy to a slender-type cultivar, narrow and wide row spacing and the recommended seeding rate with a 1.5 seeding rate. Cover crop treatments were seeded in the fall of 2019, followed by soybean in 2020. In the spring, the cover crop was terminated with a pre-seed burndown application, followed by direct seeding.

“In Lethbridge when we seeded the soybeans, the fall rye cover crop was close to hip height and still green; even though the crop is terminated it takes a while for senescence,” Geddes says. “Fall rye is a pretty competitive cover crop, and as that crop senesces it lays down and becomes a weed-suppressive mat that will help compete with weeds. We also compared the treatments in weedy and weed-free conditions. It is one thing to show that these tools can help soybean compete with weeds and reduce selection pressure, but it is not practical for growers to implement unless it is profitable as well. We don’t want to replace chemicals, but to develop an agronomic package along with herbicides to help prolong the efficacy of those herbicides in these systems. By integrating multiple non-chemical tools together, we can sometimes see synergies in weed management, even though individually they may not be as effective as applying a herbicide. Integrating multiple non-chemical tools together with herbicides, it can amplify the efficacy.”

The final experiment includes some of these same treatments, but also more levels of three different row spacings combined with four different seeding rates in comparing bushy and slender cultivars. The optimal row spacing and seeding rate may differ depending on the type of cultivar being grown. These experiments are underway, and results will be available within a couple of years.

“It is important to include other non-chemical tools in crop rotations and weed management programs to help prolong the efficacy of herbicides,” Geddes says. “With less investments into herbicide discovery, there likely won’t be a new mode of action available in the near future, and we don’t want to lose the tools we have. We expect to have some solid recommendations for growers towards the end of the project, and something that will help reduce the selection pressure for glyphosate resistance in weeds and help prolong the efficacy of that herbicide in our cropping systems.”