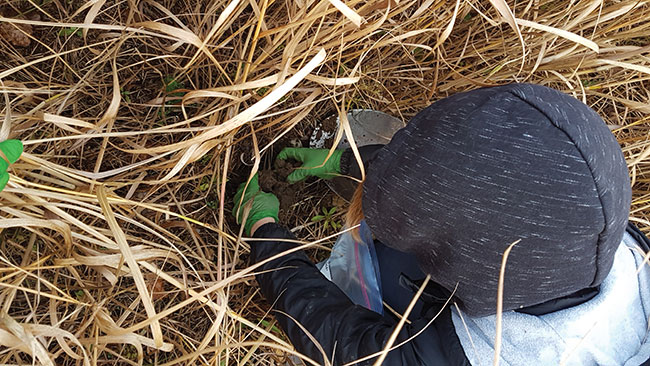 A new Ontario Agri-Food Innovation Alliance (previously the OMAFRA-U of G Partnership) study shows that management practices, such as tillage and use of cover crops, can play a major role in influencing the diversity of bacterial and fungal microbial communities in the soil.

The study, which was led by University of Guelph professor and Canada Research Chair Kari Dunfield, ran between 2015 and 2017 and used high-throughput sequencing and real-time quantitative PCR to examine the abundance and diversity of bacterial groups in a long-term experimental trial at Elora, as well as a medium-term trial at Ridgetown.

Dunfield studies microbes in the environment, looking at their ecology, their microbial processes in the soil, and how they can be used in beneficial ways in agricultural systems.

In this study, Dunfield and her collaborators analyzed soils from the long-term plots at Elora (led by Guelph professor Bill Deen) and Ridgetown (led by professor Laura Van Eerd).

“We were really interested in examining the microbial communities in these systems, because both Bill and Laura had some indications that their systems were impacting crop yield and some soil properties,” she says. “We wanted to know how the microbes were changing.”

Some of their findings were expected: in the long-term trials, tillage reduced fungal diversity, and rotation changed the types of fungi and bacteria in the soil with a stronger influence in no-till plots, Dunfield says. In long-term plots there was decreased soil health with long-term tillage and lower fungal diversity.

Cover crops had an impact on microbial community diversity, but had less impact than crop rotation and tillage.

Of the cover crops tested in the trial at Ridgetown, the treatments that scored the best for soil quality and crop yields were cereal rye and oilseed radish-rye.

“We found nearly 159 million bacteria per gram of soil and 460,000 fungi per gram of soil in the cereal rye cover crop plots, and these populations were the highest of all the treatments,” she says.

But the researchers were surprised to find that most cover crops had less of an impact on microbial communities than they expected. “Even after 40 years, when red clover cover crop was added to a corn-soy-wheat rotation, there was little difference in the bacterial communities between the two treatments at Elora,” she says.

They were also surprised that, in the medium-term horticultural cover crop trial, the no-cover crop control plots didn’t have lower diversity. “We realized that the cash or main crop plays a big role in determining the microbial community, and that leaving crop residues from the main crop on the field can feed the microbes and supply them with carbon,” Dunfield says.

New studies
Dunfield’s study is part of a larger suite of projects on soil health at the University of Guelph.

Adam Gillespie is an assistant professor at the School of Environmental Sciences who focuses on soil organic matter – for instance, how land management can influence how organic matter is stabilized and how it decomposes.

With Dunfield and Van Eerd, Gillespie is beginning a major new project looking at how organic matter contributes to crop yield. The study will look at crop rotation and cover crops in long-term experimental plots in Ontario as well as on farms.

They’re also collaborating on a new study that will compare and validate multiple soil health frameworks, including the Haney Soil Test and Cornell Soil Health tests, both of which were developed in the U.S. and tested in long-term trials in Ontario by Van Eerd, but which Gillespie says haven’t yet been validated in Ontario.

While many fertility tests are accredited in Canada, meaning there’s enough data to support the regulation of standard operating procedures for those tests, no soil health tests have yet been accredited here, Gillespie says. He isn’t involved in accreditation, but his lab’s data will help build a sense of which soil health tests are particularly relevant in an Ontario context.

A third study will focus on modelling emissions based on land use. Gillespie says most models used in Canada were developed three decades ago and need to be updated to reflect modern agronomic practices and genetics.

There’s another reason a refresh on modelling is particularly relevant: where models once reflected regional trends, farmers are starting to ask whether their agronomic approaches are helping sequester carbon on their own land. For example, Agriculture and Agri-Food Canada’s front-end modeling project Holos helps farmers get a feel for how their operations are performing.

“People are interested in farm-scale performance. That’s pretty nice, because we can start thinking at the farm scale rather than the regional scale,” Gillespie says.

“We know crops are performing differently than 30 years ago, when some of these models were developed. Modern cultivars are going to make a big difference,” he says.

Van Eerd, Dunfield and fellow University of Guelph professor Claudia Wagner-Riddle are recipients of a new endowment called Soils at Guelph that is meant to promote sustainable soil management through outreach and extension.

The initiative includes a new podcast on campus radio called “Talk Dirty to Me,” created by Soils at Guelph’s communications and outreach co-ordinator Cameron Ogilvie. It will help connect the research community with Ontario producers. Archived episodes are available at soilsatguelph.ca/podcasts/.