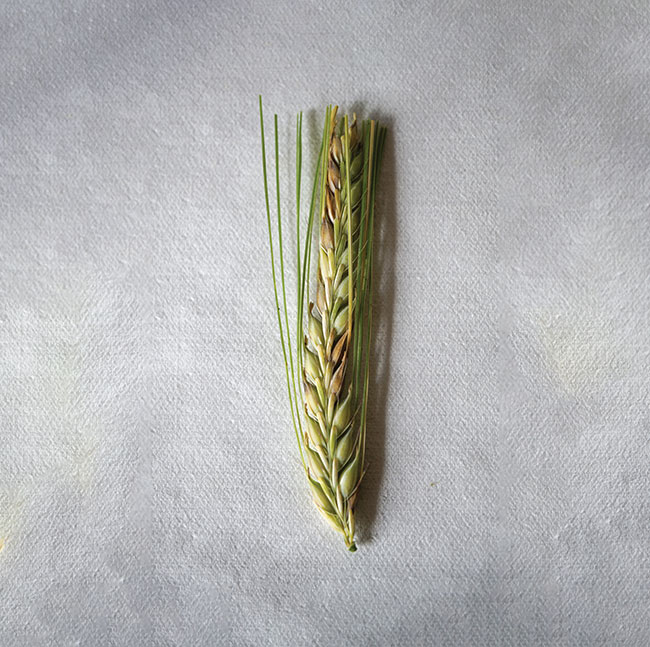 Fusarium head blight is the main disease concern for barley growers in the Maritimes. Photos courtesy of Her Majesty the Queen in Right of Canada (© 2020).

Barley growers in the Maritimes have to deal with some challenging disease issues. Adam Foster, a plant pathologist and research scientist with Agriculture and Agri-Food Canada (AAFC) in Charlottetown, is working to develop better disease management tools and information for these growers.

“In the Maritimes, the primary disease concern in barley is Fusarium head blight (FHB). This fungal disease is mainly caused by Fusarium graminearum. [It’s] a serious issue because it can contaminate grain with a mycotoxin called deoxynivalenol (DON), which severely affects the grain quality and what its end-uses can be.”

Foster says, “Other diseases of concern in the region include fungal leaf diseases like net blotch and scald. In severe outbreaks, leaf diseases can significantly reduce barley yields. Root rot diseases can also have a major impact.”

Cover crop strategies to reduce disease
Foster is leading an innovative project to examine the carryover effects of different cover crops on disease in the following barley crop. “One of the project’s primary goals is to identify if different cover crops will provide a positive or negative effect on managing diseases in barley. We are also trying to uncover the cause of the cover crop effects and whether these effects are due to changes in the soil microbial community,” Foster explains.

“So, in small-plot experimental trials at AAFC’s Harrington Research Farm, we’re testing a dozen different cover cropping treatments. These include a range of cover crops like legumes, grasses, Brassicas and forbs [other broadleaf crops such as buckwheat], but also some mixes like legumes plus Brassicas or forbs plus grasses.”

Foster and his research team collect soil and crop residue samples in both years of the two-year rotations. They use a next-generation DNA sequencing tool to quantify all the different microbes in those samples and detect if the different cover crops are causing any changes in the microbial community. He says, “The main focus is to see if any of the changes in the microbial community might be affecting the barley pathogens directly or indirectly.”

In the barley year, Foster’s team scouts the plots to see which diseases appear in the barley and to rate the severity of those diseases. They also collect data on barley yield and quality.

In the first two-year trial, they found that the primary barley disease was common root rot, mainly caused by F. oxysporum. “This pathogen can cause pretty severe damage to barley’s root system and that can affect all the aboveground parts of the plant,” Foster notes.

He adds, “F. oxysporum is a very complicated species complex, and we are in the process of determining exactly which forms of F. oxysporum we’re dealing with. We have also started some greenhouse studies on this pathogen to see how virulent it is.”

Their preliminary results indicate that some cover cropping treatments may help reduce the amount of F. oxysporum inoculum in the field. However, Foster emphasizes the need to complete the second two-year trial in 2020 and finish their data analysis before drawing any major conclusions.

He sees several possible benefits from this research. “We’re hoping to provide crop growers with valuable information on how cover cropping affects soil health and the soil microbial community because it is generally understood that soil health is vital for long-term, sustainable agriculture.

“As plant pathologists, we’re also really interested to see how those changes in soil health have downstream effects on disease management. We’re anticipating there will be both positive and negative effects, and that is what we are trying to quantify.

“We may also be able to provide growers with information [on] how different cover crops might affect disease in their barley crops, to help growers [choose] cover crops to put in their rotation.”

Forecasting FHB and DON risk
Foster is working on a number of initiatives to help Maritime barley growers to better manage FHB, a tough-to-control disease, which includes developing an FHB forecasting tool for the Maritimes.

“Once Fusarium spores are in the air and weather conditions are perfect for the disease, it is often too late for growers to apply a fungicide. So, the idea is to forecast the risk of infection earlier to allow the producers to apply their fungicides in advance and protect their crop.”

He explains, “Fusarium head blight forecasting tools exist all across North America. We want growers in Atlantic Canada to have access to the same kind of risk management tools as other areas.”

Foster is collaborating with Atlantic Grains Council on this project. “We are looking at a range of existing forecasting models that have been developed around the world, testing to see if they are appropriate for the Maritimes [to forecast] FHB in cereal crops, including barley.”

Some of the models forecast the disease, while others forecast DON contamination. The models base their forecasts on an area’s weather patterns, because weather conditions can play such a big part in the development of this disease.

To determine which model is best for the Maritimes, Foster and his team are comparing the actual FHB and DON situations in locations across the region with the predictions from the different models for those locations.

“The Grains Council is conducting barley research trials across the Maritimes as part of their on-farm agronomy project. They are providing us with harvested seeds from each of those trials. As a result, we have samples from farmers’ fields but under incredibly controlled and managed scientific settings. So we have really good data from all of the sites.”

Foster’s team cultures the Fusarium species isolated from the samples, identifies the different species and determines incidence of infection by the species that produce DON. They also grind up the grain and extract mycotoxins to quantify the amount of DON.

“In 2019, the project’s first year, four major Fusarium species were causing Fusarium head blight in barley in the survey. Only one of the species, F. graminearum, produced deoxynivalenol,” Foster says. 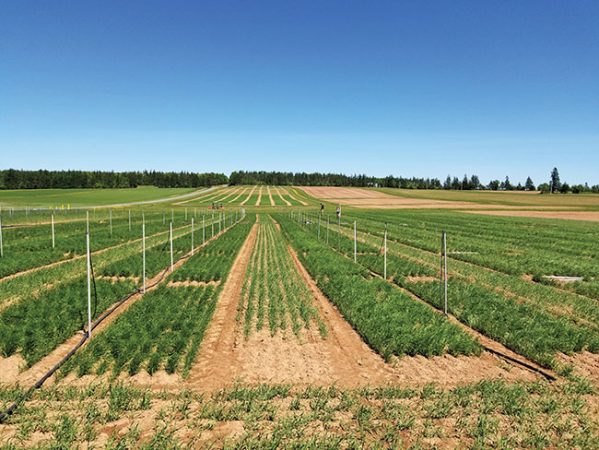 Foster’s research team sets up the misting system for the FHB disease nursery where breeding lines are evaluated for FHB resistance/susceptibility.

“All four species were found everywhere in the region. But when the weather conditions were more favourable for disease development, only the F. graminearum spiked, while the other species stayed the same. We suspect that weather conditions may not be the most important factor for predicting the other Fusarium species, but [they] aren’t as much of a concern as F. graminearum.”

He notes, “We found some pretty large differences [in FHB and DON levels] between all the sites. Some preliminary data shows the differences might correlate with weather patterns that went through those different sites.

“Of course, we need a few more years of data before we can draw any firm conclusions. But it looks like a few of the models are starting to pull ahead as being the best models for our region, and they are not necessarily the models we would have expected.”

He had originally thought that the best models might be the ones developed in the regions neighbouring Atlantic Canada. However, so far some of the models developed in other maritime regions are the ones that are performing well for the Maritimes.

“Our goal is to find the most appropriate forecast model for the Maritimes and to integrate that into a web-based tool that growers can use to assess their FHB risk,” Foster says. “This will help growers in the three Maritime provinces when making decisions on their disease management practices.”

Improving in-crop management of FHB
Foster is one of several researchers collaborating on a major national project to evaluate ways to enhance FHB management in malting barley. It involves field trials across Canada to evaluate the effects of barley seeding rates and fungicide water volume and timing on FHB development, crop productivity and malting quality. This research focuses on malting barley as it must have zero or extremely low levels of Fusarium and DON to be acceptable for malt. But he also notes, “I think the project’s findings, particularly about water volumes, will be very applicable to other types of barley.”

Kelly Turkington, a plant pathologist with AAFC in Lacombe, Alta., is leading this project, and Foster’s team is running the Atlantic Canada site in P.E.I. Once the field trials are completed in 2022, the researchers will put all their data together from across the country and develop some recommendations for barley growers.

Screening for FHB resistance
Foster works with barley breeders across Canada to screen their breeding lines for resistance to FHB in the Harrington Research Farm’s FHB disease nursery.

In the nursery, Foster’s team creates conditions for high FHB disease pressure, including applying FHB inoculum to the plants and misting the plants to keep them wet to promote disease development. “We test the breeders’ new breeding lines for FHB resistance or susceptibility under really high disease pressure conditions. This lets the breeders compare their lines to registered cultivars with known FHB resistance profiles and make choices about removing susceptible lines from their breeding program and advancing lines that are more resistant.”

Foster’s team prepares the FHB inoculum for the nursery. “We are constantly collecting Fusarium isolates from the local environment. We choose a selection of those isolates and mix them together; this way we’re not testing for resistance to one isolate when nature will produce an unlimited source of variety in Fusarium.”

He notes, “The breeders work with disease nurseries across the country. It is really important to test for FHB resistance in different regions because the Fusarium [species and strains] and the disease pressure aren’t the same in every region.”