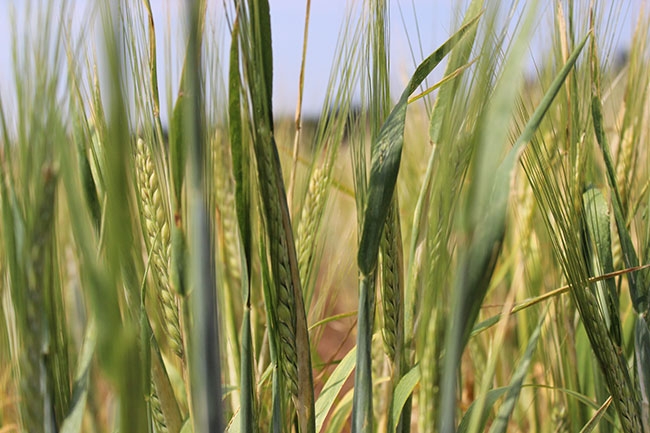 “Looking at the opportunities, malt barley tends to be a slightly higher value crop than feed barley. The malt varieties, for the most part, are higher yielding than the feed varieties. And some local opportunities are opening up for malt barley use in the craft sector, although those opportunities are small compared to the export opportunities with commodity barley,” says Aaron Mills, a research scientist with Agriculture and Agri-Food Canada (AAFC) in Charlottetown.

“Also, barley is really important to keep as a rotation crop in the Maritimes to break some of the disease and pest cycles. For instance, barley is not susceptible to sclerotinia and some other non-grass diseases.”

The main challenge for Maritime malt barley growers is meeting the strict specifications for grain quality. That requires luck with the weather, along with proper production practices and good storage conditions.

Quality basics and production
“To make a high quality malt, you have to start with high quality barley,” says Aaron MacLeod, the director of the Hartwick College Center for Craft Food and Beverage in Oneonta, N.Y. The Center is a resource for testing, technical support, and education for small and mid-sized breweries, malt houses, farms, and other craft food and beverage producers.

“Brewers are using the malt as a source of fermentable carbohydrate, which ultimately becomes the alcohol, and the malt also has to provide the enzymes to convert that starch to sugar and all of the nutrients for the yeast,” he explains. “Because the brewers require so much from the malt, the maltsters have to find grain that meets very strict criteria to ensure good performance. So it really comes down on the grower to provide grain that meets the quality standards of the malt house.”

Three of the main quality factors are protein content, germination and disease.

“The protein content of the grain has to be in a very specific range, usually between nine and 12.5 per cent. That’s because the more protein you have, the less starch and therefore the less alcohol. So the protein content can’t be too high,” MacLeod says.

“Ensuring that the protein content is not too high means holding back on nitrogen fertilizer. While you will have a lower yield, you make up for that with the price premium you get for meeting the low protein standard.”

Preserving the grain’s germination ability is extremely important because malting is a natural process of sprouting the grain where the only added ingredient is water, MacLeod explains.

One factor in preserving germination is to prevent preharvest sprouting. “In the Maritimes, preharvest sprout damage is a big challenge in reaching malt quality,” Mills notes. “Our dews, our proximity to the ocean and our increased likelihood of rain later in the season add up to a greater risk of damage.”

MacLeod says, “One of the best strategies for mitigating sprout damage is harvesting the grain early at a high moisture content. Then the grain must be carefully dried, using low heat, in order to preserve the germination.”

Maintaining cool, dry storage conditions for the grain is also important for preserving germination. MacLeod adds, “Most malt houses expect the grower to have on-farm grain storage. So you need the storage infrastructure to maintain the grain’s quality, including aeration fans and the know-how to use them, and depending on the climate, in-bin drying systems.”

The grain should also be disease-free. “Malt barley must be free of fungal diseases and must have very low levels of fungal toxins, not only because the barley is going into a food product, but also for the barley to perform well in the malt house and the brewery,” MacLeod notes.

Mills adds, “DON, or deoxynivalenol, is a fungal toxin produced by Fusarium head blight, a cereal disease favoured by moist conditions. DON is another huge challenge for malt barley in the Maritimes.”

From 2013 to 2018, Mills led a malt barley agronomics project that took place at five sites in northeastern North America, including locations in Prince Edward Island, southern Quebec, eastern Ontario, northern Ontario and upstate New York. Funding for the project came from the Brewing and Malting Barley Research Institute, AAFC under the National Barley Research Cluster, and the Alberta Barley Commission.

“Although there were differences with variety and seeding rate, the nitrogen rate overall had a much stronger effect on barley quality,” he says.

Malt barley production offers opportunities and challenges in the Maritimes.

Finding the optimal nitrogen rate can be tricky. You want enough nitrogen for reasonable test weights, thousand-seed weights and yields, but not so much nitrogen that the grain’s protein content and other quality characteristics are outside of their acceptable ranges for malting and brewing.

“We found around 50 to 60 kilograms of nitrogen per hectare was usually optimal, although the previous crop influenced that. We found that following red clover and fertilizing at this rate could result in protein levels as high as 15 to 16 per cent. My recommendation would be [for malt barley] to follow a crop that will not leave a lot of nitrogen in the soil and stay away from corn.”

The seeding rate effects were complex, with the lower rate and the higher rate each providing some quality benefits. “Generally, if barley is seeded early then we saw a higher yield, thousand-seed weight and percentage of plump kernels at 200 seeds per square metre; there were a few qualitative aspects that were better at the lower seeding rate too.”

Varieties for the Maritimes
Mills is participating in two multi-agency, multi-site efforts to test malt barley varieties in eastern North America. One is the Eastern Spring Barley Nursery project, led by Richard Horsley with North Dakota State University. This project is evaluating the performance of modern spring barley varieties from around the world.

He adds, “We’re also finding that the European varieties tend to have lower protein no matter how you manage them.”

The other variety testing initiative is in partnership with the John Innes Centre in the United Kingdom. Mills and other researchers have been testing 80 heritage varieties at sites in eastern North America.

“For the most part, the heritage varieties don’t have preharvest sprouting problems, but they do have other issues,” Mills says. “A lot of them are higher in beta-glucan, which can be problematic in the malt house, and also many of the heritage lines are lower yielding.”

Both of these variety evaluation efforts are continuing in 2018. “We’re maintaining all of our Eastern Spring Barley Nursery lines. As well, we’ve pared down from 80 heritage varieties to 40, and we are testing those in our DON nurseries in P.E.I. and Manitoba and doing agronomy trials in P.E.I. and Michigan,” Mills says.

He notes, “We’re generating all the numbers about how each variety performs in the field and in the malt house, to try and find the best qualities of each variety when we grow them in the East.” That way, maltsters, growers and brewers can make more informed decisions.

Linking the value chain
Mills believes brewers, maltsters and barley growers need a shared understanding of malt barley quality specifications for the value chain to be successful. So he is working closely with the Atlantic Grains Council on this issue for the Maritimes. “This fall, we’re hosting a farmer-maltster-brewer workshop to help get everybody on the same page, to improve communication between the maltsters and the brewers and the growers.”

MacLeod says, “Because [producing malt barley] is so risky, there has to be very good transparency throughout the value chain at each step of the process.”

The Center for Craft Food and Beverage suggests that growers in the East have a contract in place with a malt house before growing malt barley. MacLeod explains that the contract will specify which barley variety to grow because every variety performs differently in the malt house and the brewery. The contract will also cover the malt house’s quality specifications, like limits for protein and DON, and the price for the grain.

MacLeod also suggests a consideration of what will happen if the quality specifications are not met. “Although farmers can use a number of agronomic practices to help put them in the best position for meeting the quality specifications, there are factors like the weather that are outside of their control. So if the crop won’t be used for malting, is there a secondary market like a feed market or a straw market, and what price would they get on that market?”

Mills emphasizes, “Quality is the most important issue for malt barley. If the grain quality is poor, then the quality will be poor all the way along [in the malting and beer making processes], and then you will have bad beer.” And nobody wants that.