Features Cereals Diseases
Reducing the impact of FHB in barley 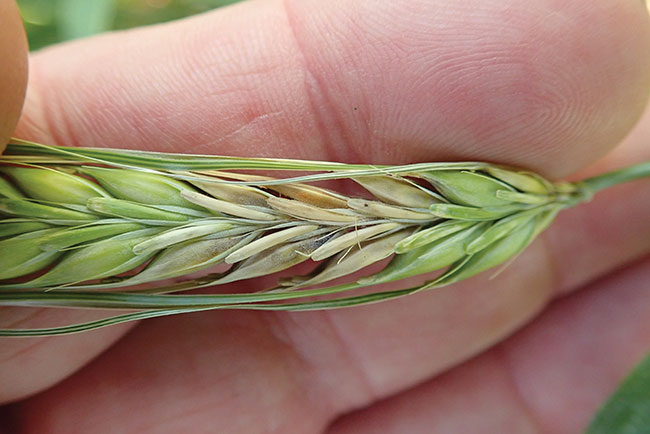 Not just a disease of concern for wheat growers, Fusarium head blight (FHB) – caused by Fusarium graminearum – is also recognized as a barley production issue across the Prairies, for both malt and feed production. Current management tools do not completely mitigate risk. Therefore, researchers are investigating potential crop management strategies for FHB suppression in barley.

“Although FHB wasn’t initially thought to be a concern for barley growers, by the mid- to late 1990s it became apparent that barley was as affected by F. graminearum as wheat,” explains Kelly Turkington, plant pathologist with Agriculture and Agri-Food Canada (AAFC) in Lacombe, Alta. “FHB and deoxynivalenol (DON) contamination influence malt barley yield and end-use quality, and have caused a westward shift in the malt selection areas for Canada and the US. Maltsters have a low tolerance and will not accept barley with DON levels nearing one ppm or higher, and similar limits affect the feed grain market for hogs.”

In 2018, a five-year Barley Cluster project led by Turkington was initiated to investigate in-crop management strategies to reduce the impact of FHB in barley. The objective of the Test 92 project is to determine if water volumes, seeding rates and fungicide timing and their potential interactions affect FHB development, leaf disease, DON content in harvested grain, crop productivity and kernel and malting quality. The AAC Synergy two-row malt barley variety, with intermediate resistance to FHB, was used at most sites. There are eight study sites across Canada, including: Lacombe and Lethbridge, Alta.; Scott, Melfort and Indian Head, Sask.; Brandon, Man.; Normandin, Que.; and Charlottetown. Turkington is also leading a similar project investigating cropping strategies for FHB in wheat.

“One of the challenges with barley is the FHB symptoms are not as distinct as in wheat and can often be confused with other conditions,” Turkington says. “There isn’t the same kernel shrivelling, and although infected crops show discolouration, it can often be confused with hail damage, spot blotch and net blotch diseases or bacterial infections. Growers also need to be scouting for emerging leaf disease problems and, if there is a significant leaf disease problem at the flag leaf emergence or just before the emergence of the second leaf from the head, then a fungicide should be applied at that stage. The timing for leaf disease management will depend on when the symptoms begin to show in the field and weather conditions. Flowering or anthesis starts just before head emergence, continues during heading, and lasts approximately 14 days. Depending on the risk, delaying a leaf disease application until anthesis or longer could compromise the level of leaf disease management, allowing the fungus to move up from the lower and middle canopy onto the emerging head. However, a later application may provide better suppression of FHB and DON reductions.”

Another challenge specific to barley is the potential persistence of DON through the malting process. Turkington explains that malt barley may meet all the specifications and have desired characteristics for malting quality, but not testing for DON could cause problems. DON is water-soluble, and when barley is brought into the malting process to the steep tanks, the process of steeping in water can initially show a decline in DON. However, when moved to the next stage of germination, the temperature range can encourage it to grow and there can be in increase in DON. At the final kiln stage, the heat may kill the fungus, but DON persists and can be a factor in the brewing process. Therefore, for achieving malting barley status in relation to FHB, DON is the primary driver.

Preliminary results for Test 92 from 2018 and 2019 have been completed, but due to COVID-19 delays some of the 2019 DON data and analysis is still being completed. Grain samples for grain and malting quality assessments have been sent to the Canadian Grain Commission, with evaluations currently underway. The study was originally intended for the growing seasons of 2018, 2019 and 2020. However, due to issues with COVID-19, the 2020 growing season experiments were cancelled and are now scheduled for 2021, which is still within the timeframe of the current Barley Cluster that runs from April 1, 2018 to March 31, 2023. 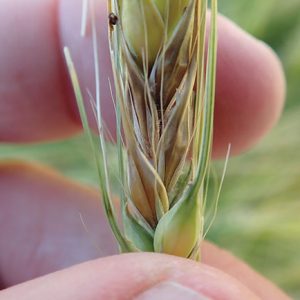 Symptoms of Fusarium head blight in barley aren’t as distinct as they are in wheat, thus often leading to an incorrect diagnosis. Infected crops show discolouration, which can be confused with hail damage, bacterial infections or net blotch diseases. 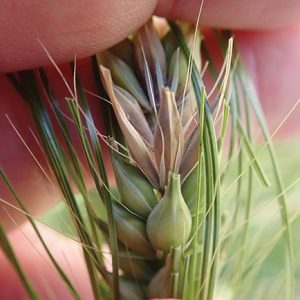 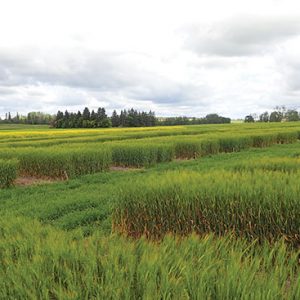 “Generally, for the study sites in 2018 and some sites in 2019, conditions were fairly dry, with limited leaf disease, FHB and DON development,” Turkington says. “In 2018, there was some indication that higher water volumes might have helped improve leaf disease control and perhaps lead to a bit better reduction in DON levels. However, we didn’t see that same pattern in 2019 for leaf disease, even with the high levels of disease at sites such as Lacombe. We are still waiting on the DON data to see if there were any effects of water volume and other treatments on DON levels. “

For fungicide timing, the preliminary results show that the optimal timing
varied depending on the site and seasonal leaf disease development, with the greatest treatment responses at sites where there were higher levels of leaf disease. Early indications are that early and dual applications tended to do a bit better, and had significantly lower disease compared to the check treatment at some sites. Delaying fungicide application to later stages may compromise leaf disease management and crop productivity when leaf disease risk increases as the barley crop progresses from flag leaf emergence to heading. However, applying an early application at 70 per cent head emergence still leaves 30 per cent of the heads without any fungicide contact or protection. The weather conditions prior to and after head emergence, and its impact on spore load at the time of application and infection conditions, will be a deciding factor in the timing of application for FHB and DON management. For leaf diseases, producers can follow disease progression earlier in the season and then, along with weather conditions, gauge the risk of leaf disease and fungicide need around the flag leaf stage through to head emergence.

Turkington notes that, overall, the preliminary results show the interaction of water volume, seeding rate and fungicide timing did not significantly affect leaf disease development and had limited impact on grain yield and kernel characteristics. Treatment effects, especially in terms of fungicide timing, generally reflected the amount of leaf disease present at each of the sites. “However, once we have DON data and analysis completed for all years, this will provide additional information about the effects of dual and later fungicide applications for FHB and DON management. By the end of the project in 2022, we expect to have more information for growers, which may indicate the need for potential label changes for the addition of a dual application or later application,” Turkington says. “Factors such as economics and pre-harvest intervals will also need to be considered. Addressing both FDK [Fusarium-damaged kernels] and DON management in cereals may require a change in mindset, regulations, or chemistries.”

Growers should continue to use an integrated approach for managing FHB and DON, as well as leaf diseases in barley. Select the best resistance package for the variety being grown, use recommended crop rotations and agronomics for a establishing a competitive and uniform crop, and include fungicide applications. Scout for leaf diseases and monitor conditions for risk of FHB disease. When applying fungicides, consult and follow the advice of spray technology experts and consider increasing water volume, which may help to improve management of leaf disease, Fusarium-damaged kernels (FDK), and DON. Using an integrated approach of fungicides and in-crop management strategies can reduce the impact of FHB in barley.