Spraying barley crops with RNA molecules that inhibit fungus growth could help protect the plants against disease, according to a new study published in PLOS Pathogens. 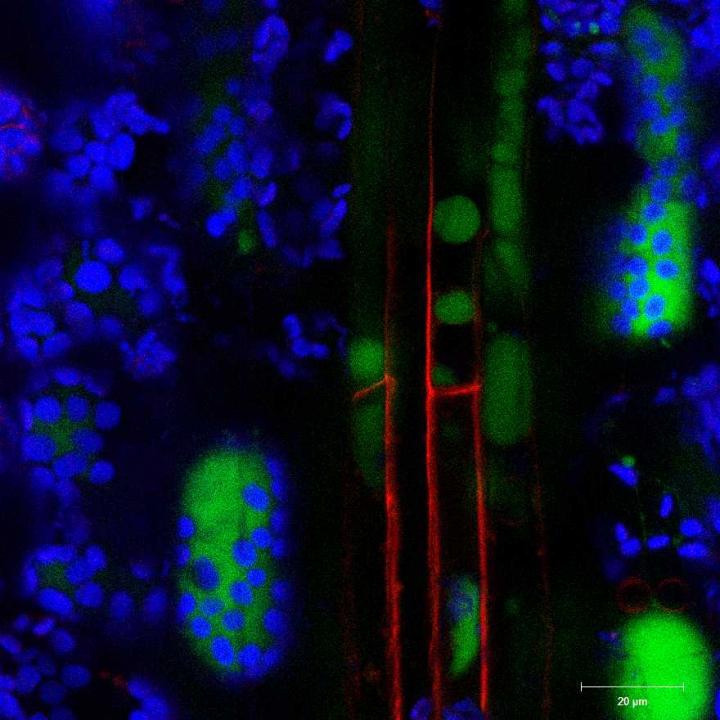 Accumulation of fluorescent-labelled dsRNA in the plant vascular system after spraying barley leaves with CYP3-dsRNAA488 that inhibits plant infection with Fusarium fungi. Spraying barley crops with RNA molecules that inhibit fungus growth could help protect the plants against disease

Plant diseases caused by fungi that grow on crops seriously threaten the world’s food supply, and fungi can develop resistance to traditional pesticides. To improve the antifungal arsenal, Aline Koch of Justus Liebig University in Germany, and colleagues are investigating RNA-based techniques that fight fungi at the genetic level.

In the new study, Koch’s team sprayed a double-stranded RNA molecule called CYP3-dsRNA onto barley leaves and exposed the plants to a common disease-causing fungus known as F. graminearum. When absorbed by fungal cells, CYP3-dsRNA is known to target and silence the expression of three key F. graminearum genes, inhibiting the pathogen’s growth.

The scientists found CYP3-dsRNA inhibited fungus growth on sprayed plants but not on unsprayed plants. The researchers also found reduced F. graminearum growth on leaves that were not directly sprayed with CYP3-dsRNA, suggesting the plant’s vascular system can transport the RNA from sprayed leaves to distant infection sites.

These findings will help inform future research into RNA-based control of plant pathogens. Koch’s team had previously shown barley plants can be genetically modified to produce CYP3-dsRNA themselves. However, scientific and societal obstacles to genetic engineering pose challenges for this technique. Spraying RNA directly onto crops could be a more viable, sustainable, and environmentally friendly alternative.