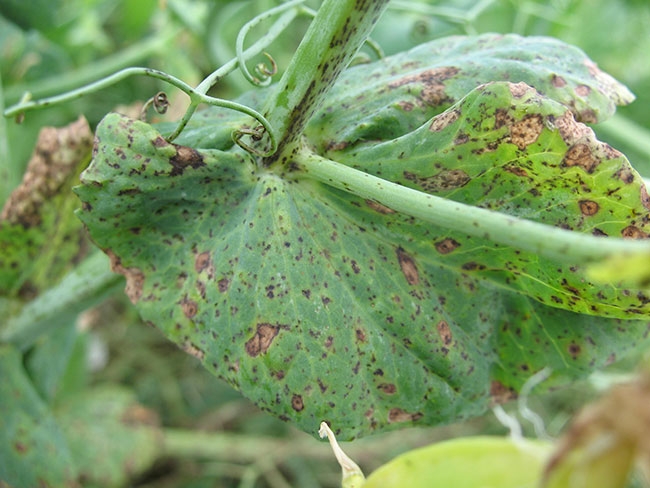 Fungicide application can reduce the Ascochyta infection on the seed. Ascochyta blight is a perennial problem for pea growers on the Prairies.

Trevor Blois, disease diagnostician with 20/20 Seed Labs in Nisku, Alta., says that pea seed tested in November 2017 at their lab showed 41 per cent of pea samples from Alberta tested positive for Ascochyta, while in 2016 this number was about 87 per cent, and 2015 was 49 per cent. Disease severity is also lower, at around three per cent infected on average, compared to 5.2 per cent last year, and 1.9 per cent in 2015.

“The driving factor for this lower incidence and severity was the drier growing season, on average, that we saw across the Prairies in 2017. This is certainly good news for growers looking for good quality, pathogen-free seed as it will be much easier to obtain this year,” Blois says.

At BioVision Seed Labs in Sherwood Park, Alta., vice-president Holly Gelech sees a similar trend. She says the number of samples where the pathogen was identified during the fall of 2017 was less than half of 2016.

Symptoms of Ascochyta blight are found on leaves, stems, flowers, and pods of field pea. Small, purplish lesions with irregular margins develop on leaves. The lesions grow and can affect entire leaves. Under severe conditions, stem lesions weaken the stems and can cause lodging. Pods may be infected and result in infected seed. Research has found that Ascochyta blight can reduce pea yield by as much as 50 per cent.

In recent years, A. pisi has been observed to be increasing in frequency in some areas of Saskatchewan. However, research by Sabine Banniza with the department of plant science at the University of Saskatchewan found that A. pisi does not appear to pose a major risk to pea production. She compared pea seed lots infected with A. pisi at levels of 14.5, 10, five, and 0.5 per cent. Seed infection with A. pisi was shown to have no or minimal effects on pea crop establishment, disease development or seed yield. Seed infection at or above 10 per cent had a minor effect on emergence. The results indicate that M. pinodes remains the main pathogen of concern in the Ascochyta blight complex.

Use clean, treated seed
Since Ascochyta blight is widespread, the pathogens are commonly found on harvested pea seed. Mark Olson, unit head with the Livestock and Crops Division with Alberta Agriculture and Forestry (AAF) at Stony Plain, Alta., says that their research has found that a two to three per cent infection level is common on pea seed. The range in their field trials has been from 0.1 to 18.5 per cent.

The commonly cited guideline for seed pea is to use seed with less than 10 per cent Ascochyta infection. This level should not significantly affect plant establishment and yield, as long as the seed has good germination and spring conditions promote quick germination and good seedling vigour.

Seed treatment is also a recommended practice to encourage fast germination. Insure Pulse is registered for control of
Ascochyta blight on seed, and Trilex Evergol is registered for suppression. Both also provide broad-spectrum control of other seed rot and seedling blights caused by other pathogens such as Fusarium spp., Rhizoctonia solani, and Pythium spp.

Olson says one common misconception that pea growers have is that infected seed contributes to aboveground foliar infections. He says research has shown that the primary means of infection is airborne spores from the over-wintering stage of the pathogens on pea residues and not Ascochyta on the seed.

Olson says that field pea stands that have less than seven to eight plants per square foot cannot compensate through increased branching, and low plant stands often result in low yields, especially if there is weed competition.

“Growers need to look at their seeding rates and ensure that they are targeting at least seven to eight plants per square foot. With the wide range in seed size and thousand kernel weight, you can’t just go out and seed three bushels per acre,” Olson says. “That’s especially important if you have infected seed.”

Fungicide application can reduce the Ascochyta infection on the seed.

Crop rotation and variety selection
Crop rotation is an important practice for reducing the impact of Ascochyta blight. Pea fields with a history of peas in tight rotations are more susceptible to a build-up of the pathogens. The pathogens can survive several years on infected pea residue, so a three- to four-year crop rotation helps reduce the level of infection in subsequent years. However, longer crop rotations may not reduce infection to insignificant levels. This is because M. pinodes ascospores can blow in from nearby fields infected with the pathogen. But longer, diversified rotations are generally acknowledged to help reduce disease loads across all crops in the rotations, and are still recommended.

While there are differences in resistance to Ascochyta blight, most pea varieties currently available are only moderately resistant. On a disease rating scale of 1 (no disease) to 9 (completely blighted), resistance ratings for registered pea varieties are between 4.0 and 5.5).

Scouting early and monitoring is critical for control. When infection moves upward in the plant canopy beyond the lower third of the plant, fungicide application should be considered. AAF has developed an Ascochyta scoring system to help growers make the decision on fungicide application. It takes into consideration factors such as timing of infection, yield potential of the crop, weather conditions and value of the harvested seed. Fungicides work by stopping the spread of the disease but will not “cure” infected parts of the plant. As a result, maximum fungicide effectiveness is at early flowering application.

“We’ve seen that two applications can be beneficial in reducing Ascochyta, depending on the level of infection. However, growers need to watch out for the pre-harvest intervals. Some of the products must be applied prior to 21 days before harvest, so timing on the second application can be pretty tight,” Olson says.

Populations of M. pinodes are at a high risk to develop insensitivity or resistance, so fungicide rotations to different groups and the use of tank mixes from different fungicide groups are necessary to prevent development of resistant pathogen populations.