Features Agronomy Pulses
Maintain the value of your pulse crops

Safe storage conditions are key to maintaining the value of pulse crops. That means dealing with a crop that may be too wet or too hot at harvest time, ensuring the grain remains at safe temperature and moisture conditions over the winter, and continuing to manage the grain to prevent spoilage if you have to keep it in storage into the next growing season.

“Just like other grains, pulse crops – peas, lentils and chickpeas – need to be stored at the proper moisture content and temperature,” says Dale Risula, the provincial crop specialist for pulse crops with the Saskatchewan Ministry of Agriculture.

He notes several harvest-time considerations for pulses going into storage. “If a pulse crop is harvested under hot conditions, we recommend putting it into an aeration bin to cool it for long-term storage.

“If the harvest weather is wet and cool, then the longer the crop is left out, the more likely it is that the seed will begin to sprout in the swath or even on the plant,” adds Risula. “When the seeds sprout, their value is reduced because the germination process uses up energy. So the grain is often sold as feed value instead of food value. The feed value of crops like chickpea is very low, and the farmer loses quite a bit of money. So it’s important to get the crop off the field and dry it down to the recommended moisture content for the particular pulse crop.”

Risula explains that pulse crops are also sensitive to oxidation through exposure to sunlight, high moisture and high temperatures. Oxidation causes bleaching and discoloration of the grain, which reduces its market value. So that’s another reason to get pulse crops off the field and into dark, safe storage conditions.

According to Risula, green peas and lentils are especially at risk of oxidation. “Green peas, when they have been harvested, are quite sensitive to sunlight and rainfall, causing bleaching. They will lose their green colour and have a faded, patchy look if they aren’t harvested and stored fairly quickly. Lentils also need to be stored out of the sunlight and open air, so oxidation doesn’t start. Green lentils in particular are prone to this problem; they can become oxidized and turn a brownish colour.”

He also reminds growers of the importance of cleaning the grain before storage to remove things like weed seeds and other green materials. “That material can hold a lot of moisture, so the grain should be cleaned fairly quickly prior to being put into long-term storage.” Cleaning also removes fine particles that can reduce airflow through the grain.

Drying and cooling requirements
“Safe-to-store moisture contents for pulses range from 13 to 16 per cent. But even when the moisture content is dry, if the temperature is high in the bin, then spoilage can occur. So pulses should be cooled to 15C or lower for safe storage,” says Dr. Joy Agnew, an engineer with the Prairie Agricultural Machinery Institute (PAMI).

Agnew explains why cooling the grain will initially remove some moisture: “When cool air hits warm grain, the cool air expands its ability to take up moisture. So there will be a really short-term or rapid drying of the grain. However, as soon as that grain is cool, cool air won’t do anything other than keep it cool.”

She adds, “Once the grain is cooled, it is very difficult to remove moisture using natural air. So it is recommended to dry the grain first and then cool it for safe storage.

If the crop comes off wet, at greater than two per cent above the recommended dry, then it should be dried first, either in a batch dryer or using natural air drying, before cooling it.

Advances in computerized monitoring systems can help farmers deal with these complexities. Agnew says companies like OPI-integris and new companies like Mifarm.ag and IntraGrain have in-grain monitoring systems that will send information to your cell phone by text or email when the system needs to be handled. “And I believe some groups are developing apps that will allow you to enter the grain conditions and the app will map out the weather forecast for your area and then tell you whether or not you should be turning your fans on.”

Risula strongly recommends frequent monitoring of the grain during the first month in storage to watch for changes in temperature and moisture conditions. “Often after a pulse crop is harvested, it goes through what is commonly called a ‘sweat’ – it exudes some moisture,” he notes. If the crop goes through a sweat after being placed in storage, moisture may accumulate within the grain mass in the bin and cause problems in a few weeks.

He adds, “Once the grain temperature and moisture content have stabilized, monitoring can be less frequent. You don’t need to do that much monitoring over the winter – once the grain has cooled to 5 C or lower, not much will likely happen to it.”

Risula also says pulses should be handled carefully if you have to transfer the grain from one bin to another. “Pulse crops tend to be prone to chipping and peeling, so care needs to be used when handling the grain. For instance you should avoid dropping it from an excessively high height into a new bin; it is better to drop it into a bin that has some seed in it already. Also movement of the grain through any augers needs to be fairly slow. If it’s moving too quickly, it is more likely to be damaged. And, if the grain is really dry or really cold, or a combination of dry and cold, then it’s more likely to chip and crack.”

Extended storage management
“Storing pulses for extended periods is not something farmers want to do because they know the crop loses value either through discoloration or if it becomes too dry and loses some value because of its lower weight. And there’s a new crop coming so they need room to store it,” notes Risula.

However, if you have to store your pulse crop into the spring, then you need to manage it. “When spring arrives, the temperature outside warms up, whereas the grain in the bin could be fairly cool. So once again, you’ve got the risk of condensation in the bin. So we recommend that, as temperatures start to warm up, you turn on the aeration system and bring the temperature of the grain closer to that of the outside conditions,” says Agnew.

“The recommendations we have [for spring conditions] are based on anecdotal evidence; we haven’t done any trials or gathered any data. But the key is to warm up the grain slowly. So start the fans as soon as the outside temperature is just a few degrees warmer than the grain.” Avoid aerating with air that is quite a bit warmer than the grain; when much warmer air hits cool grain, the air loses much of its ability to hold water, releasing lots of water into the bin.

If you’re storing grain into the summer, you’ll need to continue to monitor and manage it. “In a year like this when a lot of crop is being stored and may not be moved perhaps until next fall or later, it is critical to manage the grain over the summer, not just leave it, especially if it was cooled over the winter, as it should have been,” adds Agnew. “If you have cool grain sitting in the bin over the summer, then the sun and heat beating down on the side of the bin with cool grain will generate convection currents.”

Aerating the grain is the best way to avoid these temperature and moisture variations. But the grain has to be warmed up slowly; otherwise you’ll be dumping a lot of water into the bin.

Overall, the key is to protect your stored pulse crop from spoilage by monitoring and managing the grain temperature and moisture content for as long as it’s in the bin. 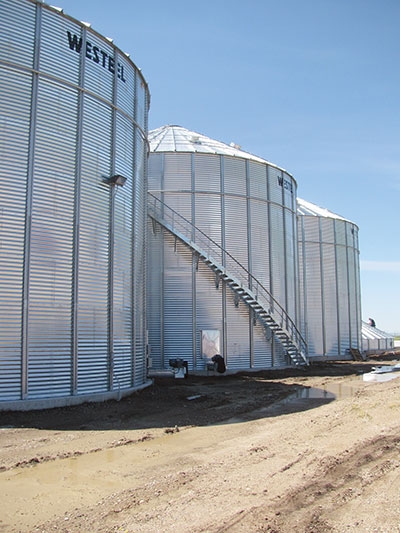 Monitor and manage grain temperature and moisture content for as long as your pulse crop is in the bin. Safe storage conditions are key to maintaining the value of pulse crops.