The wait is almost over. The first-ever Fusarium head blight (FHB) resistant winter wheat variety, Emerson, will be available to farmers for planting fall of 2014. Mother Nature will decide on the quantity, as much is dependent on the pedigreed seed crop in the ground and the July/August harvest. But if all goes well, enough certified Emerson seed could be available to plant 200,000 acres.

“We will better know the quantities available for sale once we see how production fields have survived the winter, in May or June,” says Brent Derkatch, director of operations and business development with Canterra Seeds at Winnipeg, Man., which holds the distribution rights to Emerson.

Agriculture and Agri-Food Canada (AAFC) plant breeder Rob Graf at Lethbridge, Alta., developed Emerson using doubled haploid technology, and it was supported for registration in 2011, based on evaluations across Western Canada from 2008 to 2010. The variety is the first of any wheat class to have a resistant (R) rating to Fusarium.

“There is a lot of excitement about it. Farmers have struggled with Fusarium head blight so Emerson is certainly expected to be in high demand,” says Graf.

Graf cautions, though, that farmers need to have the proper expectations of what an R rating means. He says that resistant doesn’t mean immunity, and that with Fusarium, there likely will never be complete immunity bred into a wheat variety. Rather, resistance means that the variety has a high level of tolerance to the disease, but is not completely resistant. However, Graf says Emerson has performed very well in trials, and even in the Fusarium nurseries in Manitoba where it was exposed to high levels of Fusarium under irrigation.

“Emerson has looked very good in the trials. That’s not to say that under high disease pressure it won’t have some infection, but it performs a whole lot better than those varieties without resistance,” explains Graf. “From that standpoint, Emerson may not be as good as we can get [for Fusarium resistance] and we might be able to develop even better resistance in future varieties.”

Derkatch says that feedback from pedigreed seed growers who grew the crop in 2013 has been very positive. Yields in the 2013 harvest were in the 80 to 90 bushels per acre range.

Emerson is expected to be one of the varieties to fill that CWRW void, especially given its Fusarium resistance. “Farmers are looking for a CDC Falcon replacement, and so far, it looks like Emerson will be the one,” says Derkatch.

In the Western Winter Wheat Co-op Trails in 2009 and 2010 in Area 4 (Saskatoon, Indian Head, Brandon, Carman), Emerson and CDC Falcon averaged 98-per cent yield of the check varieties, while CDC Buteo averaged 102 per cent of the checks. Information from the 2014 Manitoba Seed Guide shows Emerson and CDC Falcon have very similar yield. Emerson also has the highest grain protein of all CWRW varieties, at 12.6 per cent, compared to the others ranging from 11.3 to 11.9 per cent.

Graf says that in western Saskatchewan and Alberta, Emerson doesn’t perform quite as well as other winter wheat varieties. “There is a bit of a yield penalty as you grow the variety further west. Based on provincial data from Alberta and Saskatchewan, Emerson is about three to five per cent lower yielding than CDC Falcon in the west,” says Graf. “It will have the best fit in the eastern Prairies.”

Emerson also brings a very good agronomic package to the field. It has winter hardiness equal to CDC Falcon and is rated very good for lodging resistance. In addition to its R rating for Fusarium, it is also rated resistant to stem rust, moderately resistant to stripe rust and intermediate in resistance to leaf rust.

The source of Emerson’s Fusarium resistance is not completely understood. Emerson’s parent lines are CDC Osprey and McClintock, and they do not have good resistance to the disease, so some combination of genes must have come together to provide the resistance in Emerson – Graf was wise enough to be able to identify that resistance among the segregating lines.

Graf is continuing to look for sources of Fusarium resistance and part of a project that is genetically mapping Emerson’s resistance. If successful, this knowledge may allow plant breeders to transfer those genes and others into future varieties. The ability to develop varieties with immunity to this disease would be the “Holy Grail” for plant breeders and farmers. 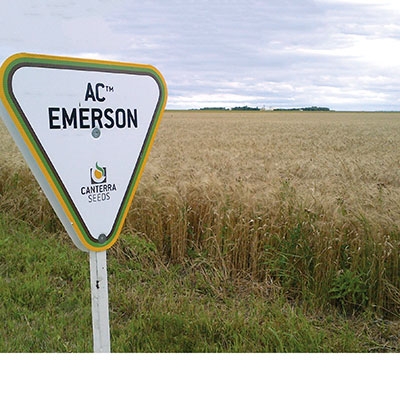