There is no doubt in Mark Olson’s mind that pulse crops are the way to go. And there’s one simple reason: “Because it’s the right thing to do.”

Olson, unit head for pulse crops, Research and Innovation Division of Alberta Agriculture and Rural Development, says pulse crops are good for the environment and good for the grower’s wallet.

“Farmers are realizing there are huge benefits to including pulses in their rotations. Results are increased yields and increased protein levels in the crops that follow a pulse, which mean more dollars in their pocket,” says Olson. “And it lowers your carbon footprint because you don’t have to transport, use and apply large quantities of manufactured fertilizer.”

Pulse crops fix nitrogen in the air, saving producers the cost of fertilizing, especially considering nitrogen nutrient is required in the largest amount by all crops, a fact that makes pulse crops both environmentally friendly and cost effective.

Over the past few years, pulse crops have increased in both acreage and tonnage, for the most part replacing barley and wheat. One of the goals of the pulse industry in Alberta is to increase from five percent of the annual crop to 15 percent. Right now, pulse acres are just over the one million mark. Olson says his unit has established short-, medium- and long-term research goals around pulse crops. Goals range from determining areas of adaptability to increasing yields through early maturity and disease resistance.

Short-term research
“In the short term, we know field pea and lentils are important crops in the rotation already, so we need to do the work to maintain or increase the yield in those crops to keep farmers profitable,” says Olson, who adds that field pea is the large-acreage pulse across the Prairies.

“In the past, we’ve gotten some pretty good prices, but haven’t had such strong price signals like we have had in the last couple of years where you’re seeing even good prices in the spring for contracts and in the fall, the demand has been pretty phenomenal.”

Demonstration fields of lentils have been seeded by growers throughout Alberta, and yields in the 2000 pounds per acre range have been seen in the areas where lentils have not been grown before. Red lentils are currently the focus of research as they mature earlier than the green lentils that many Alberta producers were growing.

Mid-range research
Research continues on faba bean in farmers’ fields as well as at research stations in Brooks, Lacombe, Vegreville, St. Albert and Barrhead. Olson says a large amount of research went into faba in the mid-2000s, which included registrations of pesticide products for the crop. However, the market for the crop has been slow to develop. “Any farmer who grows faba bean, they’re pretty excited because they like a crop that stands up and yields high, and faba bean, especially under cool, moist conditions, is a crop that really shines,” says Olson.

In 2012, faba bean brought in 60 to 70 bushels on dry land with yields as high as 125 bushels per acre under irrigation. Olson says producers reported receiving prices as high as $9 per bushel, grossing $630 per acre, which made the faba bean “very competitive with other crops in rotation.” However, Olson cautions that farmers should get contracts in place before growing faba bean to ensure they can move the crop.

There was an estimated 8000 acres of faba bean grown last year in Alberta. This year, acres are expected to increase to 10,000, notes Olson, who says the crop thrives under cool, moist conditions, and is mainly grown in the Edmonton area, along the Highway 2 corridor and on irrigated land in southern Alberta.

Long-term research
In the mid-2000s, agriculture officials started looking at legume/pulse crops that were grown in other parts of the world, considering the possibilities for Alberta. Among those considered were lima bean, mung bean, purple bean, black gram, winged bean and cow pea.

“In terms of market intelligence, mung bean kept coming to the forefront,” says Olson. Mung bean is known as bean sprouts in North America and green beans in other parts of the world. Many of the countries that are high producers of mung bean have unstable governments and others are starting to implement export bans in favour of feeding their domestic populations.

When the news of mung bean research was occurring in Alberta, companies from all over North America and Europe began expressing interest in importing mung beans from Alberta. At that point, says Olson, Alberta was importing $5 million in mung beans and it was pointed out that the US market would be another $40 to $45 million.

“There’s a lot of interest, but it’s a little further away. We’ve been working on mung bean but there are a few more things that need to be ironed out before large-scale commercial production can occur,” says Olson.

Research continues on mung bean with a focus on getting materials that have earlier maturity, disease resistance and higher yields. Olson notes that mung bean has another potential export target: there is a growing demand in China for starch, and mung bean starch is preferred and considered the “gold” standard.

Future of pulse crops
The future of pulse crops looks good. “We’re definitely making gains. It’s a good place to put your money,” says Olson, who notes that if producers can gain a percentage in yield each year, over a decade that is a 10 per cent increase. “If you think of all the acres across the province, it turns into quite a few dollars for farmers and the industry.”

The majority of pulse crops grown in Alberta are exported, most going to India. But making inroads in the domestic market, through such initiatives as restaurant weekly feature menus and recipe promotions, is a viable way to increase the need for supply. As well, the fractions of pulse crops, which are the starch, protein and fibre, are being considered for inclusion in everyday food products because of the crops’ health and environmental benefits. 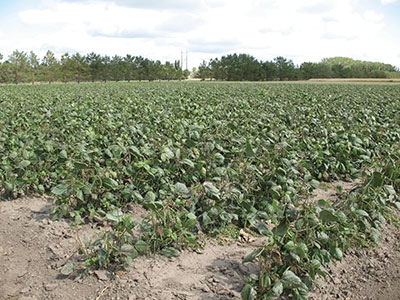 A mung bean field in Brooks There is no doubt in Mark Olson’s mind that pulse crops are the way to go.