Irrigation scheduling for water management is important for avoiding crop stress, improving crop quality and increasing crop yields. Using soil moisture measurements is one of the best and simplest ways to get feedback to help improve water management decisions. There are many tools available to help irrigation managers optimize soil water, but the practicality, ease of use and price vary considerably.

“Growers continue to look for tools and strategies to help make decisions about the timing of irrigation and the amount of water to apply,” explains Ted Harms, provincial irrigation specialist with Alberta Agriculture and Rural Development (AARD) in Brooks. “One of the main tools many irrigators continue to use to assess soil moisture is a manual soil sampler, such as a step-on Oakfield soil sampler or a crank-type Dutch auger. The manual sampler works well as a qualitative tool and is easy to use, but as operations get larger it becomes more difficult to be able to physically get out and sample every field in a timely manner.”

Harms has been working with growers for the past several years to try to find suitable soil water sensors and other tools to help make more timely decisions. The original project started about 10 years ago to evaluate six different sensors, and has expanded over the years to look at different sensors from Australia, England, Germany and other areas. Sensors that measured either soil tension or dielectric properties of the soil for soil water content were evaluated for their usefulness, practicality and the kind of information they would provide.

One challenge with all of the soil moisture sensors is interpretation of the information. Most sensors provide a volumetric water content percentage reading, however the result is meaningless without understanding the soil texture. Soils vary a lot, so growers need to know the soil texture and other factors before they can make a decision about irrigation scheduling. The soil moisture holding capacity varies by soil texture, so one reading will have different interpretations for different soil textures. For example, the same reading could be interpreted as full for a sandy soil but empty for a clay soil.

“Although most of the sensors worked well and the information is probably valuable, the feedback I got from growers was that they just didn’t have the time to invest in the installation and monitoring at what is their busiest time of year,” explains Harms. “Most of the sensors should be installed and monitored right after seeding.”

Access tubes need to be installed if growers want to measure soil water at depth, and at an average cost of $70 or more per tube, this can get expensive across a number of fields. “Therefore all of the growers I was working with no longer use these sensors and many have gone back to using manual soil samplers and computer modeling until they can find a more practical solution,” says Harms.

AARD has developed a computer-modelling tool that helps growers determine how long it will take to use up an allocation of water (www.agric.gov.ab.ca/app19/calc/volume/waterallocation.jsp).

“This Alberta Irrigation Management Model has by far had the greatest adoption for helping irrigation managers make soil water decisions and continues to have a fit in many management systems,” says Harms. “Growing high value crops with centre pivot irrigation requires irrigation every four or five days, which is easily predicted with the model. However, we encourage growers to continue to go out and periodically do some physical sampling to ensure the model is making reasonable predictions. The benefit is the model can extend the sampling from every few days to intervals of three to four weeks.”

Variable rate irrigation systems
In 2012, Harms initiated a two-year project to assess the potential of variable rate irrigation for potatoes in southern Alberta. Growers were interested in finding ways to get more production out of areas they typically don’t, such as low lying areas that get too much water or higher sandy knoll areas that don’t get enough when a uniform depth of water is applied. The project was established on a trial site about 100 kilometres from Brooks and included the installation of computer-controlled, individual sprinklers along the pivot, several wireless soil water sensors that provided daily soil and water readings to a computer, plus wireless tipping bucket rain gauges. GIS prescription maps were developed by Jeff Bronsch of Sunrise Ag in Taber for the project. The Alberta Irrigation Management Model was used to profile soil water to one-metre depth.

“Although the concept of variable rate irrigation has a lot of potential, and a few growers in Alberta are starting to use these systems, the results of our project pointed to a few challenges still to be addressed,” explains Harms. “The process was much more time consuming than expected and required a lot of in-field monitoring to manage water allocation. We needed to know the soil water status prior to an irrigation event so the pivot could be programmed to apply varying rates of irrigation water to different zones within the field. We also needed to know immediately after an irrigation event how much water had been applied to each zone. Initially, one prescription map was recommended, however the changes to the systems over the season because of rainfall, drought or other factors meant the prescription maps needed to be revised regularly. In the first year of the project, eight different prescription maps had to be developed.”

Harms believes that if an automated in-field monitoring system could be developed that would identify the soil water changes, generate the new prescription and feed that information directly into the pivot system software, then the system could be more practical and efficient. So far there are no off-the-shelf systems, so specialized information and computer programming are required. An investment of at least $12,000 in soil water monitoring system add-ons per pivot for variable rate and the time for installation, calibration, monitoring and prescription map adjustments makes the current systems more suited to research and consulting.

“Another piece of the puzzle that could really advance this technology would be applications for smart phones,” adds Harms. “Growers already use smart phones to monitor and control pivots, but there is still a gap between being able to monitor the soil water moisture and making water allocation adjustments at the same time. Making management models, soil water measures and other tools available that connect all of the information directly to the pivot software would make this technology more effective, practical and useful for irrigation managers.” 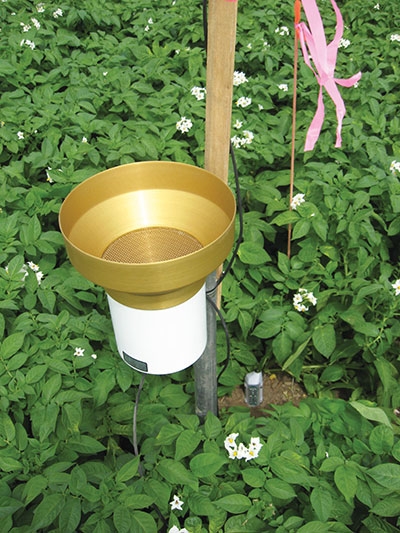