Climate will be more favourable to sawfly in as little as 10 years. 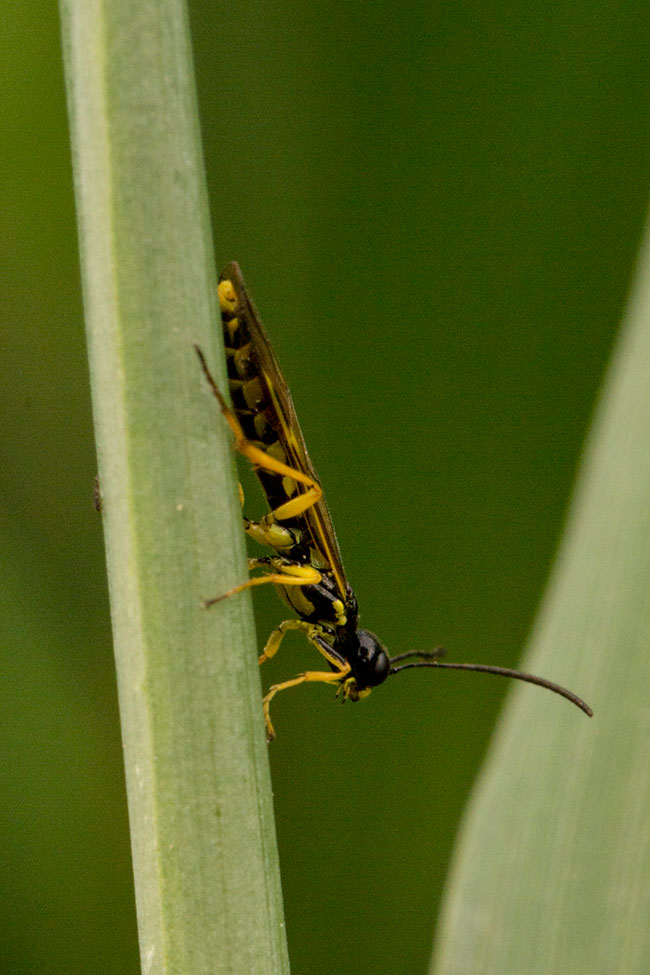 The study, which was authored by Agriculture and Agri-Food Canada (AAFC) research scientist Owen Olfert, appeared in the journal Canadian Entomologist last year.

Cephus cinctus is native to North America and, according to 2011 AAFC figures, the pest is responsible for cumulative yield losses of greater than 30 per cent and economic losses of $350 million annually.

According to Haley Catton, an AAFC cereal crop entomologist who co-authored the study, it’s a top pest of cereals in southern Alberta, southern Saskatchewan and parts of Manitoba.

Wheat stem sawfly is cyclical, with outbreak occurrences largely dependent on weather conditions. Over the last several years, it hasn’t been as much of an issue, but the pest is again on the rise, says Scott Meers, insect management specialist for Alberta Agriculture and Rural Development.

“Currently we’re seeing sawfly as an increasing problem in Alberta. Last year’s survey showed that we have some areas of pretty significant sawfly cutting,” he says.

Damage is usually noticed shortly before harvest as the crop dries down, when sawfly larvae cut the stem. But the adult sawfly is present in the field earlier in the growing season, laying eggs in late June and early July. Once hatched, the larvae feed inside wheat stems through July and August, cutting stems in the fall once moisture content has dropped below 50 per cent.

By far the best biological control agent of wheat stem sawfly is a parasitic wasp, Bracon cephi. In typical years, B. cephi sees two full generations in the field, with two opportunities for controlling wheat stem sawfly. But in dry years, when wheat is harvested early, sawfly larvae are already in stubs below the soil surface when the second generation emerges, out of the parasitoid’s range. As a result, the second generation of B. cephi is unsuccessful, its survival drops and the sawfly population increases.

Climate is the number one determinant for an insect’s distribution and abundance. For example, all pests have requirements for the number of growing season days needed to complete their lifecycles. In the case of wheat stem sawfly, it’s weather that determines the survival of the pest’s chief predator, Catton says.

“Usually insects expand right to the edge of their limits – they’ll take up as much space as they can,” Catton says. “Small changes in climate can remove a bottleneck for them and allow them to increase their range.”

Climate predictions
Olfert’s study used a bioclimatic modelling software tool called Climex, which helps describe the climatic suitability of a landscape for an insect species’ survival and reproduction, which then gives researchers a sense of population abundance.

Once the team had a map of wheat stem sawfly’s current distribution in Western Canada, they changed the climate parameters, raising and lowering temperature by one and two degrees Celsius and increasing and decreasing precipitation by 40 per cent.

Then, they assessed the response of wheat stem sawfly to two future climate scenarios – 2030 and 2070. Projections for 2030 showed that most of the Prairies and Boreal Plains would be categorized as very favourable for the pest. By 2070, according to the models, favourability for the pest would spread to the Peace Lowland ecoregion.

“The predictions from the general circulation models suggest that Canadian wheat production will be challenged by more frequent, more widespread, and more intense C. cinctus attacks in the future,” the authors conclude.

Catton says it’s important to understand that the predictions don’t explain what will necessarily happen.

“They explain favourability of environment for insects. That doesn’t account for management,” she says. “The environment is going to be more favourable for sawfly in as little as 10 years. So, we interpret this to mean that sawfly is a pest that we really need to keep paying attention to.”

Integrated pest management can go a long way toward managing the pest, she says, starting with solid-stemmed wheat varieties.

“I think these results can be framed as ‘stay vigilant’ – let’s not get complacent with sawfly,” she says. “We have solid-stemmed varieties, which can be effective, but they aren’t perfect, and we don’t know how they will perform up in the Peace.”

But the results could also be read as conservative in light of the fact that the models assume the insect won’t change. In reality, insects are constantly changing, and a native pest like wheat stem sawfly could become better at adapting over time, Catton says. “It’s our best guess based on what we know about sawfly now. But it’s trending in the wrong direction.”

Meers says that because the driving force behind sawfly population control is B. cephi, producers should try to boost its survival by leaving as much stubble as possible so the wasp can successfully overwinter. Because insecticides aren’t effective against sawfly anyway, hold off on spraying unless absolutely necessary to protect the parasitoid.