A handy smartphone application is helping farmers to determine when they should and shouldn’t spray for aphids, thereby reducing management costs, as well as helping to prevent the unnecessary eradication of helpful insect enemies.
With aphids, as most farmers know, the threshold will vary depending on the number of natural enemies present in a field. If aphid counts are below 250 per plant, it’s usually a good indication that natural enemies are doing their jobs. At this point, the use of an insecticide not only would lead to unnecessary costs, but could be harmful to the natural predator populations as well. The eradication of natural enemies could have the adverse effect of enabling aphid populations to increase above threshold – the exact scenario that insecticides are supposed to prevent. So how does it work? 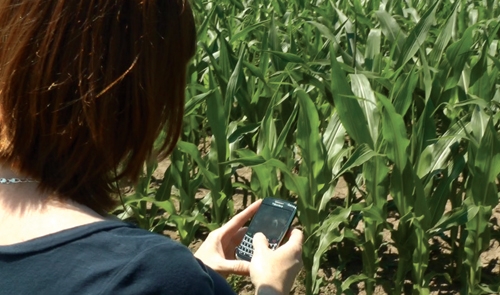 Tracy Baute uses the Aphid Advisor app in the field. A handy smartphone application is helping farmers to determine when they should and shouldn’t spray for aphids

By entering a number of variables, including temperature, aphid pressure and the presence of natural enemies, the tool will determine whether or not there’s a need to spray. First, the app will ask you to assess a field. You’ll notice that when you click on the “Assess a Field” function, a growth stage alert will appear.

“This app is only useful between the R1 and R5 growth stages,” says Tom Cowan, an entomologist with OMAFRA. “After the R5 stage, the number of aphids doesn’t seem to affect yields all that much.” Cowan introduced the app to farmers at this year’s Farm Smart Expo at the Elora Research Station in July.

Using the GPS function on your phone, you’ll then be asked to enter your location, followed by the average maximum and minimum temperature for the week. This information will help predict what aphid populations will do in the next seven days. If you choose to skip this part, the app will put in default numbers. Cowan cautions that the more accurate you are, the more accurate your numbers will be.

“Insect numbers can increase or decrease depending on temperature. So if it’s going to be a hotter than average week coming up, you may find that that’ll drive insect numbers up a little faster,” says Cowan. “The computer can then put that into the mix of variables to determine what the aphid populations will do.”

Next, you’ll be asked to determine aphid pressure. You can do this by counting the number of aphids on 10 plants that are located at least five metres apart. Be sure to move around when you’re scouting; it will help determine the average aphid pressure of the entire field. The app makes determinations for the entire field; if you come across high-pressure areas, you’ll have to decide whether or not to spot-spray on your own.

When assessing a field, Cowan says, you need to get as close to accurate counts as possible. While it is impossible to count every single aphid on a plant, there is a way to train yourself to get a good estimation of what’s in your field. First, do a proper count to get an idea of what that number looks like, and then move forward using that estimation.
“The Aphid Advisor is a tool,” says Cowan. “Good data in equals good data out. If you give it poor data, you’ll get a poor answer.”

Be sure to do a self-check halfway through to make sure that you’re on target. For those who prefer a visual tool, aphid scouting cards are available in PDF format online: www.ontariosoilcrop.org/docs/V4Soy7.pdf. Images are provided for 20, 50 and 250 aphids.

It’s important to do a follow-up assessment after seven days, says Cowan. “Aphid numbers could change, especially in the middle of the season when things start to heat up,” he says. “The more you scout your field, the more information you’ll have on it.”

Finally, the app will ask you to enter the number of natural enemies present in the field. You should, if possible, count the natural enemies at the same time as the aphids, from the same location, and then input the data. Consult the Soybean Aphid Scouting Card for images of common natural enemies. Keep in mind that there are also images available in the app itself.

After all of the data has been entered, one of three results will appear:

Once you’ve completed testing and received a recommendation, you can upload your data to a central database. The database can both store and track information, which can be used to make broader determinations in the future. Due to privacy protection, exact locations cannot be provided, but the information is available by county.

Cowan is careful to reiterate that the Aphid Advisor is a tool created to help growers make management decisions, and the success of the tool depends heavily on the accuracy of the data entered. The Aphid Advisor app is free and available for both iPhone and BlackBerry.

Lady beetles
Lady beetle larvae vary in colour. They can be black or greyish-purple with orange or yellow markings. They look somewhat like small alligators.
Both the larvae and the adults feed on aphids. Species include:
•    multi-coloured Asian
•    Coleomegilla maculata
•    seven-spotted
•   fourteen-spotted
•   lady beetle larvae

Parasitic wasps
Syrphid fly larvae are blind, legless and maggot-shaped. They vary in colour and markings, but most syrphid larvae have a long yellow stripe running down their backs. Unlike caterpillar larvae, syrphid larvae have  tapered heads. Depending on their stage of development, they can range in size from one to 13 millimetres.

The larvae can be found anywhere there are aphids. Larvae crawl on soybean leaves and feed heartily on aphids. Holding them aloft and quickly draining them, Syrphid larvae can devour up to one aphid per minute.