Features Bioenergy Other renewables
The future of crop insect control?

Picture this – futuristic metal posts dotting your fields, each one supporting a state-of-the-art biopesticide station. Sensors on each station monitor for insects, and when the presence of pests is detected, mating disruption pheromones are automatically released. These biopesticides, tailored to the type of pest and the population levels that are present, disrupt the life cycle of the pest in a safe and measured manner. 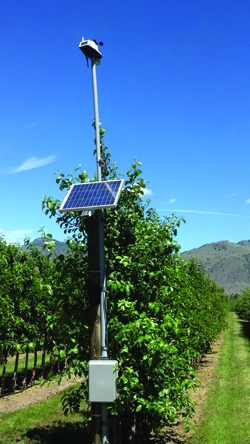 A state-of-the-art biopesticide station in a field. Picture this – futuristic metal posts dotting your fields

Does it seem like something from a science-fiction movie? It may, but such biological control of field crop insect pests may be an option sooner than you think. “We are currently testing our system in orchard, vineyard and vegetable crops, and it will ultimately see use in all types of field crops,” says Michael Gilbert, CEO of Vancouver-based SemiosBIO. “With some potential changes to trap shape and colour, testing of these traps for key field crop pests will occur next season.”
Mating disruption pheromones in a field crop scenario would work like this. Each station, upon receiving the signal that the pest population is critical, emits pheromones, which are typically mixed with a solvent such as ethanol and a propellant. This strongly attracts male insects, and they travel to and remain at the station instead of seeking out females, which drastically reduces or completely eliminates mating. “The goal of our system is to keep insect populations at levels below a threshold that is acceptable to growers,” Gilbert says. “Our system, like any other pest control method, never eliminates a pest forever. It’s about sound ongoing management.”

Automatic control
SemiosBIO is one of the leading North American companies working to expand the use of pheromones to control insect pests. The use of pheromones follows in the footsteps of field crop biopesticides such as Bt Bacillus thuringiensis bacteria), which kills insect larvae. “However, where the application of Bt is comparatively easy – field spraying – commercial use of pheromone mating disruption pheromones has been limited to orchard, tree nut and vineyard crops,” Gilbert says. “This is in part because pheromone products have been applied passively using hand-tied tags or ‘ropes,’ or through relatively short-lived spray applications that are not able to provide continuous mating disruption over the pest mating season.”

That is where the “semiosNET” application system offers a unique solution. “It provides active and on-demand application of mating pheromone in a manner that is effective and cost-efficient,” says Gilbert. “Utilizing extensive labour resources to deploy passive dispensers is not financially feasible, and the system provides the ability to deploy product at one or fewer stations per acre, with the output of pheromones dependent on weather conditions and pest population levels.”
There is daily remote monitoring of pheromone traps without the need to physically scout at the trap location. “Trapped pests can be viewed online in real time, but we are developing pest identification and counting functions that will fully automate the system,” Gilbert explains. “All of the monitoring data will be integrated with a satellite map of the farm, with current pest population information, up-to-date spray records, historical spray data and live weather reporting (including historical pest pressure and degree day analysis).”

New pheromone products
In moving forward with new mating disruption products for field crops, it’s a matter of choosing a pest and then working out how to synthesize the pheromone, which is identical to the natural version. “Some pests are easier to manage using pheromones than others, however,” adds Gilbert, “so it’s a case-by-case basis in that respect. The process of synthesizing each pheromone is basically the same, but some may involve procedures that take longer than others to develop.” He says if the active ingredients are already commercially available, a company such as his could have a product ready within about six months for field testing; registration of the product would take an additional year.

SemiosBIO says that in 2009, the global pesticide market was $43 billion, of which biopesticides represented three percent ($1.3 billion). However, the biopesticide market is expected to grow 15 percent to over $3.3 billion by 2014. “This is because biopesticides are preferred to pesticides due to health concerns,” Gilbert says, “and many dangerous pesticides are being phased out.” For example, Gilbert says that in 2000, organophosphate chemicals accounted for 72 percent of all insecticide active ingredients, but as of 2007, they were found in only 35 per cent of all insecticides used in the United States. He adds that manufacturers of mating disruption pheromones are making efforts to ensure their products are certified for organic use.

Besides being environmentally friendly, mating disruption pheromone biopesticides don’t involve resistance. “It hasn’t been observed in over 20 years of use,” Gilbert explains. “This is because of the two factors. First, resistance occurs when most pests are killed by a pesticide, but a few  survive and mate. Mating disruption pheromones do not kill the pest but alter behaviour. Secondly, the genes of any insect that somehow becomes non-responsive or resistant to sex pheromone would be quickly eliminated from the population because these insects would be much less likely to successfully mate.”
However, not all field crop insect pests can be controlled using mating disruption pheromones. “The European corn borer is a good candidate for mating disruption, but corn rootworm, for example, is not,” says Gary Judd, a research scientist at Agriculture and Agri-food Canada’s Pacific Agriculture Research Centre in Summerland, British Columbia. (Judd says other field crop pests, including vegetables, in Canada that may be suitable for control by mating disruption in addition to European corn borer, are diamondback moth, red clover case bearer moth, orange wheat blossom midge, leek moth, and various cutworm moths.) “Corn rootworm is a beetle as an adult and has different pheromone chemistry than European corn borer, which is a moth as an adult. So if you want to control something like rootworm with pheromones, you’d have to use something like attract-and-trap stations or attract-and-kill stations (attract the pest with pheromone and kill it at the station as they crawl on a surface with a small amount of pesticide). However, resistance comes into play with this, and labour costs as well.”

Gilbert says the SemiosBIO precision pest management system is provided as a service at a price point that saves farmers money. “The system is designed to remain in the fields for several years with only the batteries and pheromone canisters requiring replacement every one to two years,” he explains. “Unlike tree fruit orchards where the system is shaded by the foliage, open field applications will be more amenable to solar power.”

Judd is excited and supportive of using mating disruption pheromone control of field crop pests, but he says it’s going to take concerted effort to get it into common usage. “European corn borer and others are great candidates for this type of control, but growers may say it’s not cost-effective to have stations for just one or a few pests when they are spraying anyway for disease and weed control,” he says. “Yes, we can just as easily spray for corn borer, but do we always want to do what’s easiest and reach for pesticides? It’s not an excuse. And resistance and pesticides are becoming more and more of an issue each year. And the value of remote monitoring and release of pheromone is not to be ignored. Automation is very efficient.”