Soybean production is spreading across the Prairies. In 2016, Manitoba had nearly 1.64 million acres seeded to the crop, and Saskatchewan seeded 240,000 acres. In Alberta, production is still relatively low at around 15,000 acres, according to industry estimates. But with early and very early maturing varieties becoming more common and with the expanding soybean crushing capacity in the province, more Alberta growers are considering this crop. 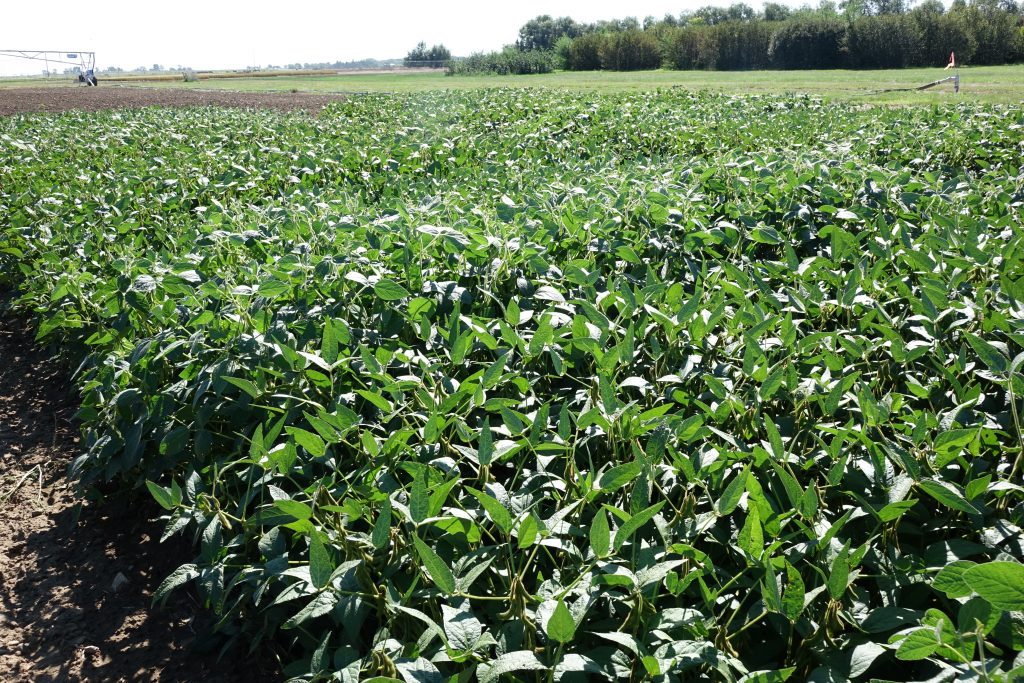 Now, two collaborating soybean projects with agronomic, economic and varietal studies are nearing completion. The results will help create a solid foundation for soybean as a profitable crop option on irrigated land in southern Alberta. 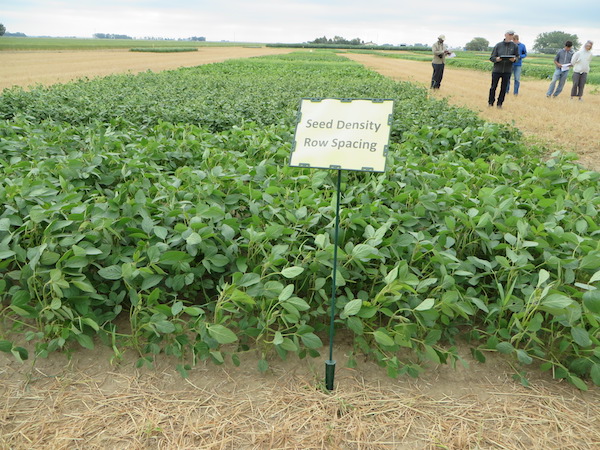 Bandara has been working on soybeans since about 2004, when he started conducting variety trials in southern Alberta as part of the Western Soybean Adaptation Trials. Bandara’s group tested Roundup Ready and conventional varieties under both rain-fed and supplementary irrigation conditions. In the first few years of the trials, soybean yields ranged from about 267 to 3,703 kilograms per hectare (kg/ha). Over time, as breeders developed improved early maturing varieties, the yields in these trials rose to around 3,000 to 4,000 kg/ha (45 to 60 bushels per acre, or bu/ac).

“With these results, we were convinced that we could grow soybean under supplementary irrigation conditions in southern Alberta,” Bandara says. “Then I talked to several growers and Patrick Fabian [of Fabian Seed Farms in Tilley, Alta.], who has been conducting some soybean research himself, encouraged me to submit a research proposal on soybean.”

That led to Bandara’s current four-year research project on irrigated soybean production, which runs from 2014 to 2017. The project has four components. The first is evaluating new soybean varieties and lines. The second is assessing various production practices, such as seeding density, row spacing, root nodulation, and irrigation scheduling. The third is comparing the benefits of soybean versus dry bean production and the final one is testing the most promising agronomic treatments from the small-plot experiments under field-scale production.

Variety evaluations
The variety trials in Bandara’s current project are taking place under supplementary irrigation in Brooks, Medicine Hat, Bow Island and Lethbridge, Alta. Each year, his team is testing 16 to 18 Roundup Ready varieties and three conventional varieties. The seed companies participating in the trials select which of their latest varieties/lines they would like to include in the testing. The conventional varieties are all older varieties.

Bandara’s team is collecting data on such traits as pod clearance, yield, days to maturity, and heat units to identify which varieties/lines have the best traits for commercial production in southern Alberta.

As well, the varieties must be high yielding. Bandara explains that if soybean is going to find a place within irrigated rotations in southern Alberta, it has to be at least as profitable as well-established irrigated crops like corn, dry bean and sugar beet. The project is targeting soybean varieties that yield more than 4,000 kg/ha (60 bu/ac) in the small-plot trials; under farm field production, the actual yields would be somewhat lower. A few of the varieties in the trials are meeting that target and Bandara has heard some irrigation farmers in southern Alberta are getting close to 60 bu/ac with certain varieties.

Early maturity is also essential. Soybean maturity can be described in various ways including: maturity group (a rating based mainly on day length, but also influenced by temperature); the number of crop heat units (CHU) needed to take the variety to maturity; and the number of frost-free days needed for maturity. Most of the soybeans in Bandara’s trials are in the 00 maturity group, which includes early- and mid-season varieties for the Prairies.

One of the interesting findings from this work is that not only are the total CHUs important, but when those CHUs occur is also key. “We broke down the heat unit requirement based on the crop’s phenological stages [growth stages]. We found that heat units received during flowering, pod set and post-flowering are critical for higher seed yields,” Bandara explains. “We have to determine when a variety is flowering and what heat units it will be receiving. So it is not just the variety itself, but how it matches with the local growing conditions.”

AAF plant pathologist Mike Harding is monitoring the varieties for disease, but very little has occurred in the trials.

Bandara’s results so far show that, when soybeans are seeded in the second or third week of May, the varieties that mature within 116 to 121 days under southern Alberta conditions will be the highest yielding, good quality varieties for the region.

Seeding density, row spacing
“Soybean is such a new crop for Alberta that little information is available on agronomic questions that new growers would be asking about,” Larney says. His project aims to find answers to some of those questions.

Larney is collaborating on the project with Bandara and Doon Pauly, an agronomy research scientist with AAF. Tram Thai, a master’s student at the University of Lethbridge, is also working on the project under the supervision of Larney and James Thomas with the university’s department of biological sciences.

One of the studies in Larney’s project took place at Bow Island and Lethbridge from 2014 to 2016. It compared two row spacings (17.5 and 35 centimetres) and three seeding densities (30, 50 and 80 seeds per square metre, or seeds/m2) for the Roundup Ready soybean varieties NSC Tilston and Co-op F045R. Bandara chose the soybean varieties, picking two that had done well in his variety trials.

Larney’s team collected data on characteristics such as emergence, days to flowering, plant height at flowering, days to maturity, plant height at maturity, and pod clearance. They also measured yield components like pods per plant, seeds per plant, thousand seed weight, and seed yield, analyzed nitrogen uptake in the plants and estimated the amount of nitrogen returned to the soil from the aboveground crop residues.

Data analysis is partially completed; Larney highlights some of the initial results from the 2014 and 2015 growing seasons. “The main effect was with the seeding density. When we averaged the data for both sites and both years, we saw a yield increase as the seeding density increased. At 30 seeds/m2, yields were between 2,200 and 2,400 kg/ha. At 50, we had 2,600 kg/ha and at 80 seeds/m2, we had almost 3,000 kg/ha, do there is a difference of about 600 to 800 kg/ha in yield response from the lowest to the highest seeding density.”

He adds, “However, there is a trade-off between the yield from the extra seed and the cost of the extra seed.” The team is planning to do an economic analysis to find the economically optimum seeding density.

Higher seeding densities also resulted in taller soybean plants with higher pod clearance. “Averaged over the two years at both sites, at 30 seeds/m2, the lowest pod height is five centimetres; at 50 seeds/m2, it is six centimetres; and at 80 seeds/m2, it is seven centimetres.” As well, higher seeding densities were associated with slightly earlier maturity and higher nitrogen levels in the grain and straw. Soybean disease wasn’t an issue, even in the denser plantings.

The wider row spacing treatments had taller plants at flowering, better pod clearance, and slightly earlier maturity than the narrower treatments. Row spacing didn’t have a significant effect on yield.

The Bow Island site had slightly higher heat units and about 10 fewer days to maturity than the Lethbridge site. However, the yields at Lethbridge were just as good as those at Bow Island.

Soybean versus dry bean
Larney’s and Bandara’s projects each have a study comparing soybean and dry bean production. Larney’s study, which is taking place at Bow Island and Lethbridge, looks at the nitrogen benefits of the two crops.

“The current legume of choice under irrigation in Alberta is dry bean. The question is: would soybean acres be replacing dry bean acres? And, if so, what is the comparison between dry bean and soybean in terms of nitrogen carryover credits to the following crop in the rotation?” Larney says.

This study’s fieldwork started in 2014 and will be completed in 2017. He explains, “In year 1 [in 2014, 2015, 2016], we plant soybean, dry bean and barley. In year 2 [in 2015, 2016, 2017], we plant wheat in those plots. We apply six different nitrogen rates on the wheat and look at the yield response.” The wheat crop’s nitrogen uptake is used as a measure of the nitrogen credit from the previous soybean and dry bean crops, with barley as a non-legume check crop. In addition, the project team is collecting other nitrogen-related data such as the spring and fall soil nitrate-nitrogen levels and the nitrogen uptake by the different crops in year 1.

“I had always been told that, compared to other legumes, dry bean doesn’t fix that much nitrogen that is carried over to the subsequent crop, so I had thought soybean would be better than dry bean,” Larney notes. For example, Jeff Schoenau from the University of Saskatchewan has reported that, in Western Canada, soybeans fix 40 to 140 pounds of nitrogen per acre (45 to 155 kg/ha), while dry beans fix five to 70 pounds (six to 78 kg) and alfalfa fixes 100 to 250 pounds (112 to 280 kg).

Bandara’s study compares the profitability of soybean versus dry bean production. Once the field data collection is completed, Ron Gietz with AAF will do this economic analysis.

The study developed a cost-effective irrigation schedule. Bandara says, “When we looked at how the different treatments affected yield, we found that early irrigation doesn’t have much impact. The most important period for irrigation is at flowering and after flowering. If you provide good moisture after flowering, then you can have yields of 3,300 kg/ha, compared to 3,500 kg/ha when fully irrigated.”

Field-scale trial and more
Bandara’s team is currently working with Fabian on a field-scale irrigation and seeding density study. On Fabian’s farm, they are testing the most promising treatments from the small-plot studies to see if any adjustments might be needed when using the practices on farms.

Funding for Larney’s project is from AAFC’s Pulse Science Cluster with matching funds provided by the Manitoba Pulse and Soybean Growers, and from Growing Forward 2.

Bandara is hoping to continue the soybean variety evaluation work after 2017, provided funding support from the seed companies is available. As well, he hopes to tackle some other soybean research topics. He notes that Alberta soybean growers are asking for research on white mould (Sclerotinia), which is likely to be a threat to soybean crops, especially under irrigation, and for research on rain-fed soybean production in the Dark Brown soil zone using newly available 000 very early maturing soybean varieties.


Related
Exploring the possibility of mung bean production
What is new in dry bean and soybean varieties?
Time for an irrigated fertilizer agronomy update
Tips for new growers of irrigated corn