[Miss part one? Click here]
Importance of multiple modes of action
I’m horrified to hear that you can apply straight strobilurin fungicide to your crops, since there’s no other mode of action in the application to protect you from pathogen mutants that might be strobilurin resistant. If you went back to when the strobilurins were breaking down to Ascochyta in some of your pulse crops, it’s worth asking yourself, wouldn’t it have been better to have been using them in combination with other older multi-site fungicides in order to give the strobilurins a degree of protection?

What’s now happening in Europe is that there’s a lot of dependence on the triazole fungicides since there is widespread resistance amongst a number of pathogens to strobilurins and increasingly to SDHIs. However it’s not the same with all pathogens. For example, the rusts – stripe rust, leaf rust – seem particularly stable. But with the necrotrophic diseases such as Septoria, such as net blotch, such as scald, populations are shifting. That stated, the triazoles remain the backbone of disease management programs all over the world.

Now I know what you’re thinking: aren’t triazoles all from the same family of chemistry with the same mode of action? That’s where the resistance to these molecules is more complicated. For example, in one region, Folicur might not work very well on the Septoria pathogen, but a Tilt still does a reasonable job, depending on the history of fungicide use. Somewhere else in Europe, the exact reverse might be happening.

In Europe, they’ve set up a project called EuroWheat with 26 trials all across Europe examining triazole fungicides and their activity against key diseases, looking at not only what’s happening in the field in terms of foliar control, but then taking samples for lab analysis. It’s revealing that the pathogen is adapting in different regions differently, depending on what fungicides have been used, particularly the Septoria population.

We are now beginning to see the same thing with Septoria in Australia. Some products that are effective on the mainland of Australia don’t work well in Tasmania.

What can we do to protect fungicides going forward? We can minimize our use of them. Pick the best adapted, highest yielding, and most resistant varieties we can use. Such a choice might enable you to use just one fungicide application instead of two applications. In some parts of the world, there are guidelines advising using that active ingredient just once in a growing season. But probably the strongest message that comes out around the different regions of the world is the one about mixing different modes of action in cereal crops.

So think about fungicides as part of that integrated disease management package – use them, but don’t overuse them.

Across Europe at the moment, the new SDHIs are entering the market already mixed and formulated with a triazole in order to ensure the use of two modes of action in a fungicide application. “Make sure that you’re mixing different modes of action” is the strongest message that comes out of the scientific studies on fungicide resistance and it’s the one key take-home that I can give you. If you’re not mixing, ask why not.

There is one area that is important to clarify and that is with regard to fungicide rate and resistance. I don’t believe that there’s a lot of scientific evidence in the literature that suggests keeping fungicide rates high is a good anti-resistance strategy. Generally it is with herbicides, but I’m not sure that evidence exists for fungicides. Frank van den Bosch from Rothamsted in the U.K. did a literature search on 46 different fungicide studies and found there were more studies showing that increasing fungicide rate increased resistance selection pressure than the reverse. I think it’s more appropriate that we consider fungicide rate as an efficacy message, not a resistance message: i.e. what rate of fungicide is appropriate to obtain the best economic outcome. There are other things, like mixing our active ingredients with different modes of action, which are far more important in resistance management than considering fungicide rates.

Linking pathology with crop physiology
The other factor that is really important is linking our knowledge of pathology with crop physiology. Fungicides don’t only kill a disease, they keep plant leaves greener for longer, providing soil water is available to express the benefit of the disease free leaves. The upper leaves of the cereal crop canopy, particularly the top four, affect the ability of a plant to produce yield. In Australia, disease management strategies based on fungicides are particularly dependent on the presence of soil water to express the benefit of a fungicide both in terms of yield response and economic return.

One of the things from Europe that I think they have right is that they talk all the time about “What are the key parts of the plant to protect from disease?” If you’re growing a cereal crop, what do the individual leaves on that cereal crop contribute to yield? That’s an incredibly important part of any strategy using a fungicide. We use fungicides to make money, not just control disease, and what’s been really good in Europe is actually characterizing which parts of the plant are best to protect from disease.

When it comes to thinking about fungicides, don’t only think about the disease. The time of disease onset in the crop will determine to which leaves fungicides are applied. In Europe, set development timings trigger the questions. “Do we have the disease? Are the conditions conducive for the disease? What’s this crop going to yield?” These are key questions that link the effect of the disease with the physiology of the crop. 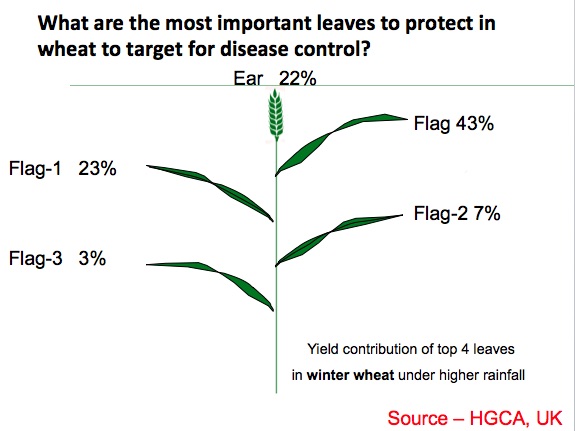 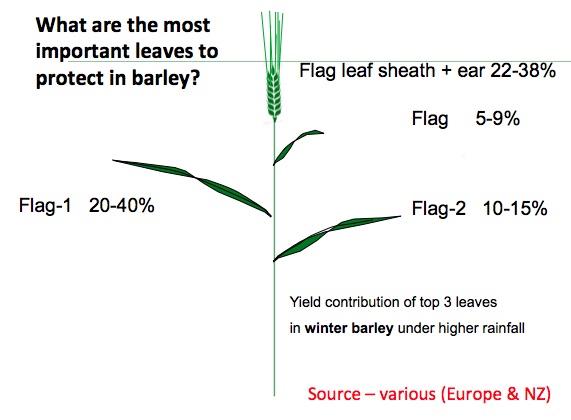 I think the key message when it comes to thinking about using fungicides as part of an integrated disease management package is to recognize that they’re not very effective at protecting tissue that’s not emerged at the time of application. Other than reducing overall inoculum in the crop, fungicides only directly protect the leaves and plant structures that are emerged at the time of application, so you need to target the most important leaves that contribute to yield.

I’d like to finish off with a reference to future developments. The Magnetic Induction Cycler (MIC) is about the size of a four-litre pail. From leaf samples using MIC, you can determine the genetic makeup of the pathogen population, determining not only the presence of genetic mutations that might affect fungicide performance but also the frequency of the population with that mutation. In the future this technology will assist the advisor in making the right product choice for individual paddocks. That technology moving forward could be linked with automated spore traps informing us when pathogen spores are moving into the paddock, their genetic makeup and how that’s going to affect product choice.

Lastly, I believe RNA interference technology has the potential to produce the next phase of environmentally-friendly fungicides. The technology is based on short segments of nucleotide that are absorbed into the plant and pathogen, and which can switch off the RNA messenger before it can synthesize the proteins for fungal development in that plant. It is very specific technology and offers some great potential for disease management in the future.