December 2, 2014 - It is somewhat well known that greater nutrient use efficiency is seen in wheat when fungicides are applied. This has spurred interest in further study of this interaction and how it can boost yields of other crops, such as soybeans.

“In previous years, Bruce County Soil and Crop Improvement Association (BSCIA) participated in projects on wheat looking at the interaction of nitrogen use and fungicide application, so we wanted to try a similar project on soybeans to investigate if the same synergies exist,” says Blair Scott, BSCIA president and an agronomist at Sprucedale Agromart in Hanover, Ont. “We based our study on a similar trial in the Chatham-Kent area, conducted by Agris Co-op, that showed a measurable economic response when the applications were timely and followed by rainfall.”

In the trials, KP Plus or KP Plus and Headline EC were applied at the rate of 1 kg/ac of KP Plus and 160 mL/ac of Headline on soybeans at the R1 plant stage (first pod initiation), with numerous replications in the same field. The expected response was five bushels per acre over the control, but in 2013, neither treatment provided a statistically significant result.

“Using less sophisticated analysis, we did find a trend at two sites, one with KP Plus only and the other with the fertilizer and fungicide,” Zettler notes. “KP Plus alone provided the largest average positive response, yielding 1.33 bushels per acre about 66 per cent of the time.” With both fertilizer and fungicide, the interaction led to an average positive response of 0.65 bu/ac, but only half the time.

This has not been typical of findings at other trials conducted in the province, Zettler notes. On average, other trials showed a greater response from the interaction of KP Plus and Headline treatment over KP Plus applied alone. The differing result could stem from the fact the summer of 2013 was quite dry, with many of the sites actually in a drought situation following application.

“Application timings in 2013 were also on the late side,” Scott explains. “In 2013, by the time our collaborators were able to spray, some of the sites were in the R4 growth stage.” A larger response was noted between different parts of the field, rather than from differences in fertilizer application, which supports the finding that soil type plays a bigger factor in soybean yield than foliar amendments.

“Soybean growth stage and timing could be factors in yield response from plot to plot, [a] finding we planned to examine in 2014,” Scott says. “We also planned to take soil and tissue samples in 2014 to provide more data points for analysis purposes from the applied fields.”

In 2014, the trials again tested KP Plus alone, and KP Plus and Headline EC fungicide, in addition to the untreated check. Each field had a minimum of two passes of 1 kg/ac of KP Plus, or two passes of 1 kg/ac of KP Plus and 160 mL/ac of Headline EC. The team recorded field size, soil type, soybean variety, plant stage and condition, and weather conditions following application.

“In 2014 we made sure we got the sites sprayed sooner, targeting the R2.5 to R3 growth stage,” explains Zettler. “We are hoping that the earlier application in 2014 combined with the wet summer we just had will produce some more interesting results this fall. We are also going to make sure we have soil test results collected from each site so we can see if there is any relationship between soil test K and response to KP Plus.”

Due to the delays caused by wet weather, harvest progress was slow in October. As in 2013, harvest yield and yield/moisture measurements are the highest priority for the team in terms of data gathering. But Zettler, Scott and their colleagues are also attempting to observe things like plant standability, number of pods and seeds per pod if at all possible.

Scott and Zettler both say preliminary results are promising. In one trial field harvested, the results show a 1.3 bu/ac increase using KP Plus over the untreated control, and a 3.9 bu/ac increase for soybeans applied with both KP Plus and Headline. The full results will be available on the OSCIA website in future. “It is our intent to carry the trial on for a third year in 2015 if we have enough interest and funding is available,” says Scott. 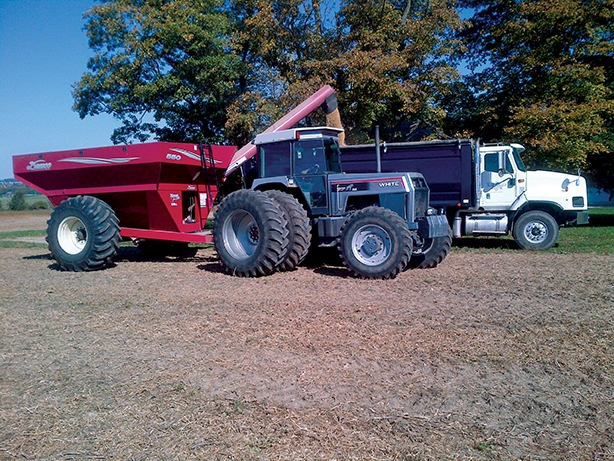 Grain buggy unloading soybeans into Ikendale Farms straight truck for delivery to the elevator. It is somewhat well known that greater nutrient use efficiency is seen in wheat when fungicides are applied.