With foliar fungicide applications, timing is a key factor in soybean yield response. A soybean specialist gives his take on the best timing options.

Based on his research results so far, “the long and the short of it is that fungicide timing is highly dependent on the year and what disease you are going after,” says Horst Bohner, provincial soybean specialist with the Ontario Ministry of Agriculture, Food and Rural Affairs (OMAFRA).

Bohner’s research interest in fungicide applications began about 10 years ago. “In 2004, soybean rust was found in Ontario for the first time. It was just on one leaf so it wasn’t an economic issue. But it did stir the industry to register fungicides to help control that disease if an outbreak occurred,” he explains. “Prior to that we really only used foliar fungicides in soybeans very sparingly and mostly for white mould. Unfortunately fungicides didn’t really work well for white mould control because soybeans flower for such a long time.” (For white mould, the aim of a fungicide application is to protect the flowers because infected petals are the main way the disease starts in the plant.)

“So in 2005, we started a number of trials – as did many people – to assess the different foliar fungicides available at that time. We found that there was a real yield benefit even in the absence of soybean rust; often there are other minor diseases present or, in some cases, there are no visible disease symptoms at all.”

Once they knew there was a definite yield benefit from a foliar fungicide, the next question to answer was timing-related: which soybean growth stage would be the best time for spraying? Given that soybeans flower for a long time, what timing would be the most effective for white mould? And what timing would be best for controlling other foliar soybean diseases?

Fungicide companies had been recommending that foliar fungicides be applied between the R3 (beginning pod) stage and the R4 (full pod) stage, based on research conducted mainly in the United States. However, results in some initial Ontario trials by BASF and by David Hooker from the University of Guelph’s Ridgetown campus indicated that an earlier timing, between the R2 (full flower) stage and the R3 stage, provided a greater yield benefit. So Hooker conducted trials in 2013 and found that an R2 to R3 timing increased soybean yields by about one to 1.5 bushels per acre compared to the R3 to R4 timing.

Generally in Ontario soybean trials, the yield response to a single foliar fungicide application averages about two bushels per acre, so the possibility of an extra bushel per acre is exciting. As a result, Hooker continued his fungicide timing trials in 2014 and 2015.

Hooker’s 2013 results sparked Bohner’s interest in fungicide timing. So Bohner has been conducting field-scale, replicated
trials to compare various application timings for the past two years, with funding assistance through the Grain Farmers of Ontario.

The 2015 trials involved Priaxor, Stratego Pro, Allegro and Acapela, and were conducted at Bornholm and Lucan, with two soybean varieties at each site. The timings were: untreated control; in-furrow; V6; R2; R4; and R2 + R3.

The tables on the right show the yield results of the different treatments in 2014 and 2015. So far in the trials, the in-furrow and V6 fungicide timings have not resulted in statistically significant yield gains.

In 2014, the wet, cool weather conditions favoured white mould at two of the sites. The results showed that if white mould is present at moderate levels, then using a foliar fungicide can produce large yield gains. The greatest yield benefit occurred with the most intensive treatment (in-furrow + R2 + R4); the in-furrow portion of this intensive treatment likely did not affect the yield.

In 2015, there was no statistically significant difference between any of the yields, likely because there was no disease pressure present.

Timing tips
Bohner’s results show that the choice between R1, R2, R3 and R4 timing depends on which disease is the major concern and on the weather conditions.

“If you are trying to suppress white mould – white mould is a really hard disease to control so we talk about suppression – you need to think about spraying two times in the growing season. Because you are trying to protect the flowers, consider spraying at R1 [first flower] and then following up with another application 10 to 14 days later, which is around R3. The timing of the first application is not the early part of R1, because R1 can happen quite early in the season. Often R2 is fine for the first spray; if you do that, then you would follow with another application at R4,” Bohner says.

“[The choice between a late R1 timing and an R2 timing] depends on the growing season, how big the plants are, how much moisture there is and how much it looks like there is going to be a disease problem. One of the main considerations is coverage. If the plants are quite small and good coverage can be achieved at R2, then this timing is likely all right.

“For the other foliar diseases, when most growers will only need to spray once, the earliest you should spray is at R2,” he adds. “In 2015, we showed that you could spray right up to the R4 stage and get the same [yield] response as at the R2 stage. So the window for the correct timing is wider than we thought it was. It probably ranges from mid-R2 to R4 in most years, depending on the growing conditions that season.”

With these other foliar diseases, you have some time to scout and decide whether the disease problem is serious enough to warrant a fungicide application. For white mould, however, you cannot wait until the disease shows up in the crop. “Typically at that late R1, R2 or R3 stage, when you’ll be spraying the first time for white mould, almost no disease would be present. So you have to base your spray decision on the field’s disease history and the weather. If it is cool and wet, and you have had a lot of disease in that field, in my estimate you should apply that first spray at the late R1 to early R2 stage. And then you see what the weather does. If it is wet and cool and you are starting to see some white mould, then you spray again 14 days later. If it turns hot and dry, you don’t spray again,” Bohner explains.

He emphasizes, “If you wait to see significant white mould in the crop, then it’s too late to spray. The research shows that. If you wait to spray at R5, for instance, there is no response at all to a fungicide. The disease is set in.

“Overall, if you are going to chase control of disease and higher yields with these fungicides, then so far in my work, two applications provide much more consistent results. Of course the problem with that is the cost. And the cost is a pretty big barrier.” 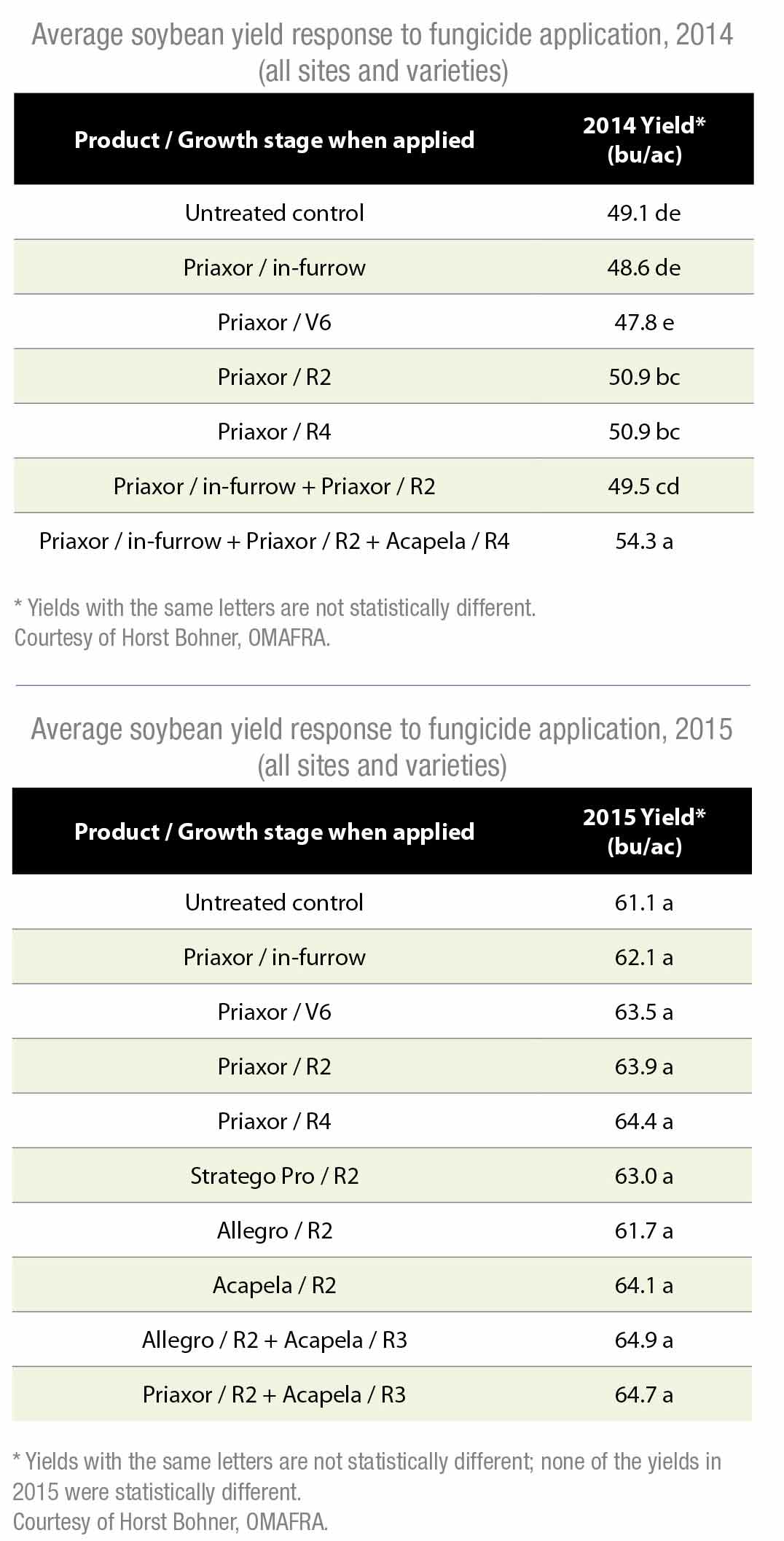 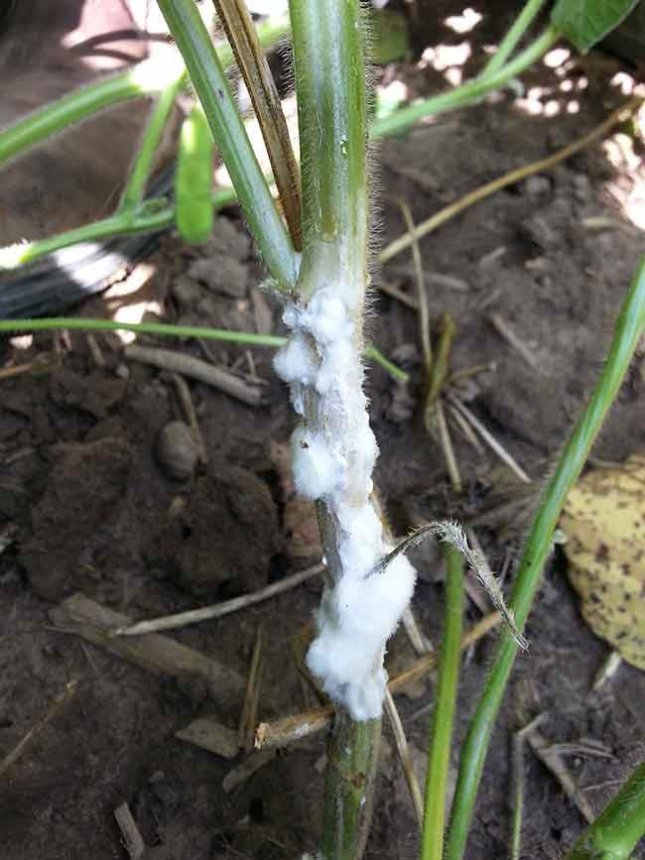