December 2, 2014 - Knowledge about weed competition has been understood for decades and science has explained the optimum time to control weeds to prevent crop losses. But, why are weeds so much stronger? In most crops it appears the weeds will always claim the upper hand – so scientists at the University of Guelph began to wonder why. For example, what is it about a weed plant, any weed plant, that makes it seem stronger than soybeans?

There is now proof that, in fact, in a simplistic sense, the weed is “communicating” with the soybean plant. Dr. Clarence Swanton and M.Sc. candidate Jessica Gal undertook research to understand the mechanisms of plant competition. They learned why, if during the critical period for weed removal, weeds are not controlled, the soybean plant will cede the ground and will, figuratively, leave the field.

“We saw the physiology of the soybean plant change in the seedling stage of the growing period when weeds were present,” says Gal. “We wondered how the plant could detect the presence of weeds. What we learned is the plant can detect the weed through changes in light quality. When the soybean plant detects the weeds, it undergoes significant and rapid physiological changes, which may affect the yield.”

Swanton explains the research focused on the red to far-red ratio in the light spectrum that is reflected off the soybean leaf surfaces. When the soybean plant detects there is another plant reflecting red light back to it, it senses the competition and begins to prepare itself for survival by trying to “out-compete” the weed by becoming taller and thinner. Of course, as the soybean plant changes to survive, seed production may be affected and, ultimately, yield.

“This work suggests this is less about plant competition and more about detecting or sensing a change in the environment,” says Swanton. “The soybean is changing to improve its own fitness and, as it does this, yield may be reduced.”

Gal did most of the work on this project in a growth chamber in order to control the environment of plant development, and to ensure all growing needs were met equally. Her work focuses specifically on the light reflection theory as all the plants, whether weed or soybean, were not competing for nutrition, water or the amount of light.

“We looked at the stages of plant development from emergence to the second trifoliate stage of growth,” Gal explains. “We began to see an increase in the soybean shoot height so the plant could out-compete the weed and we saw this competition continue through to the cotyledon stage. We also looked at the roots and saw a decrease in the root length as early as the second trifoliate stage. In addition, the root surface was reduced. Just by detecting the presence of the weed, there was a significant change in the physiology of the soybean plant, which is something that we can’t see when standing in the field.”

The reflected light from the far-red spectrum is causing a delay in the development of the root system, which will ultimately affect the plant’s ability to produce yield. It is specifically an issue with the reflected light in the red spectrum range that is causing the plant to change. Gal found that even when additional light was introduced the soybean plant still changed because of what would have been a comparable increase in red spectrum light reflected off the weed.

“This research reinforces the importance of early weed control,” notes Swanton. “Start with a weed-free field and keep it clean. We have just proven the rationale behind this advice. This study shows that any change in the root structure of the soybean plant may affect yield.”

The next step in the research was to determine how weed competition affected nodulation. Since nodules are not viable until the unifoliate stage, the presence of above-ground weeds was found to reduce the development of nodules.

“If your soy plant is not fixing nitrogen plant protein will be reduced and this all ties in to yield,” says Swanton.

As Gal explains: “We see the gene that promotes early nodulation is reduced in plants faced with competition. So, the above-ground weed signals the soybean to suppress the gene required for nodulation.”

If the information on how root development is affected by weeds causing yield reduction is not enough, the results of Gal’s research showing how weed competition can also trigger reduced nodulation should provide the incentive to ensure early and effective weed control.

The researchers also attempted to measure the plant’s response to stress. They found the plants had increased levels of hydrogen peroxide, a compound that plants produce when they are under stress. The result, not surprisingly, was even more soybean plant damage.

What the researchers learned is difficult to quantify in a field situation because the variables cannot be controlled. But, they are convinced the principles they have uncovered are true. In the end, it may not matter as much how the plant gets stressed and how it reacts to that stress. Instead, the understanding of how that stress is caused and how it gets triggered in the plant proves why delaying weed control in soybeans could be a critical factor in the eventual yield. By reducing the chance for the plant to experience stress by controlling weeds, it will have no need to increase its response to stress and, instead, will concentrate on creating seed to ensure its survival. 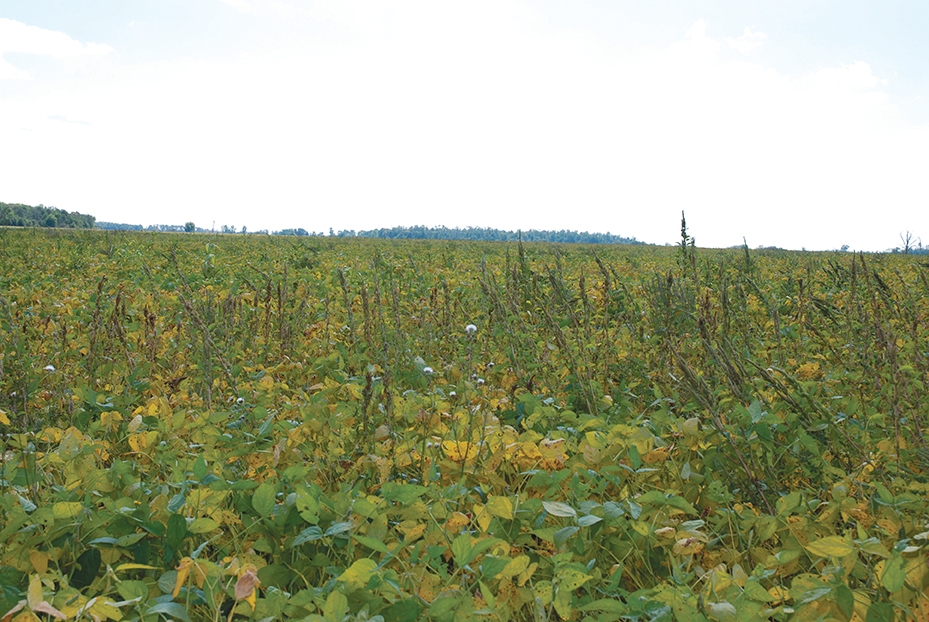 Research has found that when a soybean plant detects weeds Knowledge about weed competition has been understood for decades and science has explained the optimum time to control weeds to prevent crop losses. But