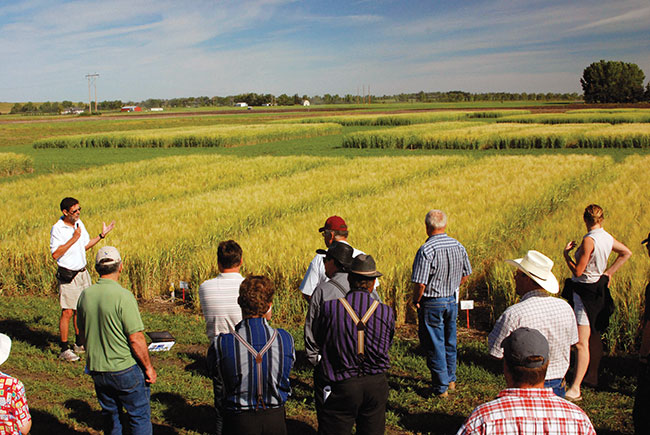 Don’t flip the page after reading “cultural weed management.” It’s an important part of weed control, even when using herbicides.

“The idea behind cultural weed management is increasing crop competitiveness helps compete with weeds for resources like nutrients, water and sunlight. With fewer resources, weeds will have reduced fitness and have fewer viable seeds to return to the seedbank,” says Charles Geddes, research scientist with Agriculture and Agri-Food Canada in Lethbridge, Alta.

Cultural weed management is one of four cornerstones of Integrated Weed Management; the other three consisting of physical or mechanical weed control, bio-control with pathogens, insects or even livestock, and herbicide control. Shifting competitiveness in favour of the crop instead of weeds also helps battle the selection for herbicide resistance. Greater crop competition reduces weed competition, improves herbicide weed control, and reduces weed seed production of weeds that escape herbicide control. “Many cultural tools are already used by growers but they don’t necessarily categorize them as cultural weed management,” Geddes says.

Establishing a healthy plant stand goes a long way towards increasing the competitiveness of a crop. Bob Blackshaw, an AAFC researcher in Lethbridge, Alta., ranked crops according to their competitive ability: Rye > oat > barley > wheat > canola > field pea > soybean > flax > lentil. The rankings may be different in different areas of the Prairies, and hybrid canola is more competitive than open pollinated varieties. Some varieties within a crop are also more competitive than others.

In another AAFC study led by Bill May, 18 field experiments at six locations in western Manitoba and eastern Saskatchewan, oats were seeded at various rates, with target plant densities ranging from 14 to 42 plants per square foot. When no wild oat was present, yields at all seeding rates were around 120 bushels per acre (bu/ac). With wild oat pressure, the 14 plants seeding rate yielded 84 bu/ac, rising to 97 bu/ac at 21 plants, with yield topping out at 100 bushels bu/ac for the remaining higher seeding rates.

Narrower spacing has also been proven to help the crop compete with weeds. In cereals, very narrow row spacing was found to reduce overall weed competitiveness. Row spacing as low as four inches is not practical with today’s no-till equipment, and row spacing of nine to 12 inches is generally used by most farmers. As a result, seeding rate may be more important than row spacing.

Pulling some of these stand establishment practices together, Geddes completed the second year of a multi-year trial in 2018 investigating the interaction of row spacing, seeding density and crop rotation on glyphosate-resistant kochia control. He is looking at a crop rotation of spring wheat-Clearfield lentil-spring wheat-Liberty Link canola and is utilizing typical herbicides for kochia control.

“We want to see if there are benefits in combining multiple tools over a longer period of time. We hypothesize that there should be lower weed seed production with narrower row spacing and higher seeding rates,” Geddes says. “We also hypothesize that the benefits of using these cultural tools consistently will amplify over time.”

Seeding date is also viewed as a cultural management practice. Generally, earlier seeding allows the crop to get established and better compete with weeds. But delayed seeding can allow for management of a greater number of emerged weeds prior to planting, sometimes resulting in lower weed emergence after the crop is planted.

Intercropping research is generating great interest, and involves growing more than one crop in the same field at the same time. In a field experiment in Manitoba, wheat, canola and pea were grown as sole crops and in intercrops including a three-way intercrop. Weed biomass was generally lower in the intercrops. Wheat-canola and canola-pea gave the best weed suppression.

“The idea with an intercrop is that the crop is better adapted to environmental conditions and will utilize more of the niche space that would have been available to weeds,” Geddes says.

Cover crops are also a cultural weed management tool. Cover crops can be used to suppress weeds and prevent erosion as a fallow substitute. Fall rye seeded after harvest has also been used to provide weed suppression and erosion protection in longer growing season areas.

Implementing these cultural weed management practices can take an investment in time and input cost. However, Geddes says that the practices can eventually pay off.

“In order to wrap our heads around it, we have to look at the longer term. If we implement the practices consistently, we will see benefits down the road with lower weed pressure and reduced selection pressure on herbicide-resistant biotypes,” Geddes says.