Full registration of the imidazolinone-tolerant (IMI-tolerant) chickpea system with recommended chickpea varieties and registered Solo herbicide is imminent. Two IMI-tolerant chickpea varieties – CDC Alma (Kabuli-type) and CDC Cory (Desi-type) – have already been developed. The Prairie Pesticide Minor Use Consortium has submitted the application for Solo herbicide use on IMI-tolerant chickpea to the Pesticide Management Regulatory Agency (PMRA) and registration could be received in early 2017. 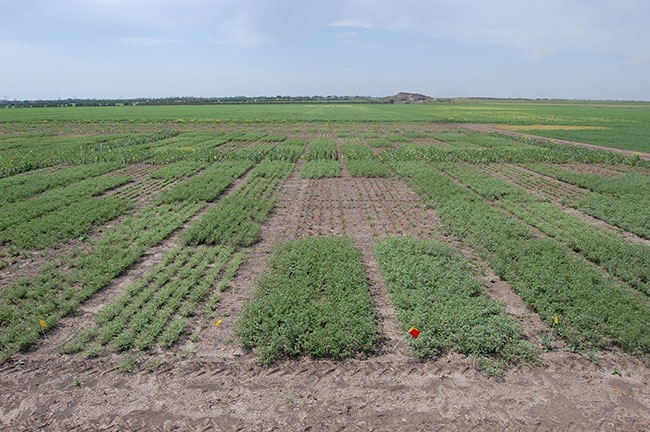 “The program is in full swing for development of IMI-tolerant chickpea, however, the paperwork/labelling is still in progress for the herbicide. We are expecting it will be in place for the 2017 season,” says Bunyamin Tar’an, chickpea breeder at the University of Saskatchewan’s Crop Development Centre (CDC).

Development of IMI-tolerant chickpea began in 2008 at the CDC, when Tar’an screened 299 chickpea genotypes from around the world, including Canadian genotypes, for tolerance to Group 2 imidazolinone herbicides. A total of 169 genotypes were in the Desi market class and 130 in the Kabuli market class.

The chickpea genotypes were grown in greenhouse pots and sprayed with Odyssey herbicide (imazamox+imazethapyr) at the recommended pea rate at the three-node stage. Tolerance was rated at seven, 14 and 21 days after treatment.

Large differences among the genotypes in response to a mixture of imazethapyr and imazamox were observed with several accessions identified with tolerance. A single nucleotide substitution in the AHAS1 gene leading to resistance to imidazolinone in chickpea was identified. The resistance is inherited as a single gene. A molecular marker targeting the single nucleotide substitution (polymorphism) was developed to allow early selection and speed up the development of chickpea varieties with resistance to IMI herbicides.

“To our knowledge, this was the first report of screening for tolerance to a mixture of imazethapyr and imazamox in chickpea,” Tar’an says.

Conventional breeding using natural variation in the germplasm pool as the source for imazethapyr/imazamox tolerance in chickpea means the new varieties are non-GMO, and CDC Alma and CDC Cory are the first of the IMI-tolerant varieties to be registered.

Tar’an says all future chickpea varieties developed at CDC will be IMI-tolerant.

System benefits
Chickpea is a poor weed competitor because it has slow seedling growth, low stature and is slow to close the canopy, especially on wider seedrows. Yield loss without weed control has been reported as high as 81 to 97 per cent. The main weeds of concern include kochia, Russian thistle, wild mustard, and stinkweed.

The Group 14 herbicides Authority and Authority Charge are pre-plant or pre-emergent surface applied for control of kochia, lamb’s-quarters, redroot pigweed and wild buckwheat, and suppression of cleavers. Valtera, another Group 14 herbicide, is also surface applied in the fall or in the spring pre-seed or pre-emergent. Valtera controls kochia, pigweeds, lamb’s-quarters, chickweed and a few other broadleaf species. These herbicides are important for controlling kochia, which is generally recognized as having broad Group 2 resistance.

Metribuzin (i.e Sencor, a Group 5 herbicide) is the only broadleaf herbicide that can be applied post-emergence. However, application can only be made up to the three-node stage when the plant is less than three inches in height. Application past this stage can result in severe crop injury. After application, some leaf scorch almost always occurs, but plants usually recover quickly. Metribuzin suppresses a range of broadleaf weeds, including chickweed, wild mustard, stinkweed, lamb’s-quarters, volunteer canola and green smartweed.

By comparison, once registered for use on IMI-tolerant chickpea, Solo herbicide will offer a wider post-emergent application range and will control both grassy and broadleaf weeds. Broadleaf weeds controlled include wild mustard, stinkweed, shepherd’s-purse, redroot pigweed, lamb’s-quarters, cow cockle, and green smartweed, with suppression of cleavers and wild buckwheat.

The IMI tolerance was tested in field trials in 2012 and 2013 to verify the tolerance and weed control benefits. Conventional chickpea varieties CDC Luna and CDC Corinne were compared with IMI-tolerant CDC Alma and CDC Cory. Odyssey herbicide was applied at the two- to four-, five- to eight- and nine- to twelve-node growth stages.

Control plots without herbicides were hand-weeded.

Visual injury estimates were 50 per cent for CDC Luna and CDC Corinne for all growth stage applications, while IMI-tolerant CDC Alma and CDC Cory showed no negative response at any growth stage of IMI herbicide application. In 2013, the herbicide caused yield reduction in the conventional varieties, but yield with the IMI-tolerant varieties was the same as in the hand-weeded control.

In the Kabuli-type class, CDC Alma doesn’t have as good a performance as popular conventional varieties CDC Orion and CDC Leader. CDC Alma has good seed size but is weaker in yield and disease resistance.

“When better performing IMI-tolerant Kabuli-type varieties come to market and growers can legally apply Solo, I expect they will move towards these newer varieties,” Phelps says.