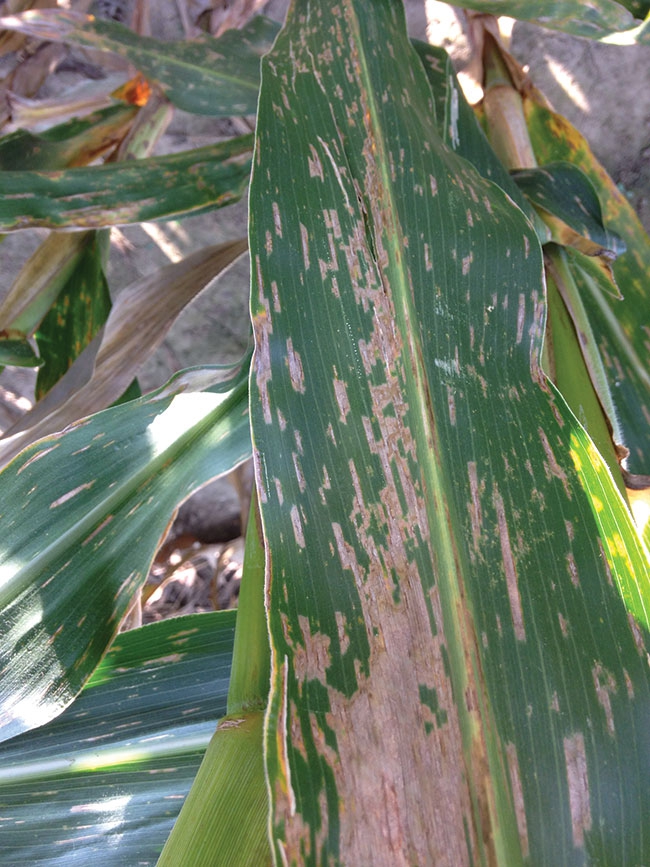 “A lot of times [farmers] worry about the exotic diseases that are coming, like soybean rust, Ug99 and Goss’s wilt,” Tenuta says. “But we have more than enough pathogens and pests [already] in the province that cause us issues.”

Diseases producers are already familiar with, such as Northern corn leaf blight (NCLB) and grey leaf spot (GLS), are emerging as bigger threats each year.

With regard to NCLB, researchers are seeing new races that can bypass resistance genes, Tenuta says. And GLS is an example of a disease that’s slowly widened its presence in Ontario – from just a few fields 25 years ago to most of southern Ontario within the last seven years.

This information reaches growers annually via the Ontario corn disease survey, co-ordinated by Tenuta and Agriculture and Agri-Food Canada (AAFC) research scientist Lana Reid. The survey, a joint AAFC-OMAFRA venture, is designed to provide an overview of endemic and invasive corn pathogens.

In 2015 and 2016, AAFC’s Krishan Jindal helped conduct the survey, which has run uninterrupted for 15 years (with the exception of 2013, when no survey was conducted due to lack of funding). The survey is supported in part by the AAFC Growing Forward partnership with the Canadian Field Crop Research Alliance and the Grain Farmers of Ontario, who obtained partial funding through Growing Forward 2.

Dave Hooker, an agronomist at the University of Guelph Ridgetown campus, is also on the grant for his work on NCLB, and conducts fungicide trials with Tenuta for NCLB and other foliar diseases.

“Surveys are a continuous process. The climate is changing, the pathogen profile is changing and there are new genotypes coming into the field with different resistance,” Jindal says.

One of the chief objectives of the next Growing Forward science cluster is to identify current and emerging corn pathogens, and use that information to improve management, screen inbreds and identify and validate new sources of resistant germplasm. Jindal and his colleagues are submitting a proposal to expand the survey’s scope in 2018 to help meet these goals.

Grey leaf spot has slowly widened its presence in Ontario

2015 and 2016
The survey takes into account both disease incidence and severity, Tenuta says, which helps researchers note, for example, whether diseases are widespread with minimal severity or not widespread with high severity.

Incidence and severity of corn disease overall in Ontario decreased in 2016 compared to 2015 and previous years, due to early planting and hot, dry conditions throughout the growing season.

In 2016, as in 2015, NCLB, common rust and eyespot were the most common leaf diseases found in Ontario cornfields. According to the survey results, NCLB and common rust were found in at least 92 per cent of fields tested in southern and western Ontario, with only 16 per cent and nine per cent, respectively, of the affected fields having incidence levels of at least 25 per cent. Eyespot was found in 75 per cent of the fields tested.

GLS was identified in 72 per cent of fields sampled in southern Ontario, widening its spread from 2014 and 2015.

Ear and stalk rot diseases were not significant in the 2016 results, and as in 2015, Stewart’s wilt and Goss’s bacterial wilt were not detected in the province.

Tenuta says the team always checks for Goss’s wilt, which has been detected in Alberta, Manitoba and northern U.S. states, but there was no sign of the disease in 2015 and 2016.

“I’m not saying it’s not here, but if it is it would be trace amounts, and the season wasn’t conducive to it,” he says. “With a lot of these new pathogens, they often will start at really low levels and build up slowly.”

Jindal says researchers are closely monitoring Goss’s wilt. “It’s a very serious problem and we are keeping an eye on it as it is seed-borne. We always tell companies and farmers that they should keep an eye on their seed.” he says.

Though the survey was conducted too early to register any incidence of stalk rots, including Pythium stalk rot, Tenuta says these are always a concern. “We’re seeing more species of Pythium in the province. You’ve got a greater diversity in the environmental conditions that they favour,” he says. “So you’ve got a greater window of activity for these pathogens.”

But there are examples of major economic diseases the province has successfully managed, such as Stewart’s wilt. The disease, which is vectored by flea beetle, has been virtually eliminated in Ontario through targeted use of seed treatments. This success proves careful monitoring and management is worth a great deal in the long term.

As always, successful management starts with the seed, Tenuta says. Producers should look at the disease package of any given variety, as well as its agronomic qualities, and examine current hybrid disease pressure ratings. “Tie those characteristics to your specific fields – those fields that have a history of NCLB, and have more residue, for example. Those are the fields that are more at risk,” he says.

“In season, scout those fields and know what’s going on,” Tenuta says. “If you are not identifying the issue or problem or disease, your management strategy may be ineffective and end up costing you a fair amount of money.”

Finally, Tenuta advises producers to keep an eye on their investment. “Whatever your management strategy is, if you have a resistant or tolerant variety, or if you use a fungicide or seed treatment, you’ve got to follow up to see if it’s working in that field.”