Weed control challenges are becoming even more difficult as the number of herbicide-resistant weeds in pulse crops continues to grow. With more than 60 unique cases of herbicide resistance identified in Canada and some weeds developing resistance to key pulse herbicides such as Pursuit (imazethapyr, Group 2) and Solo (imazamox, Group 2), the challenges will become even more daunting in the future. 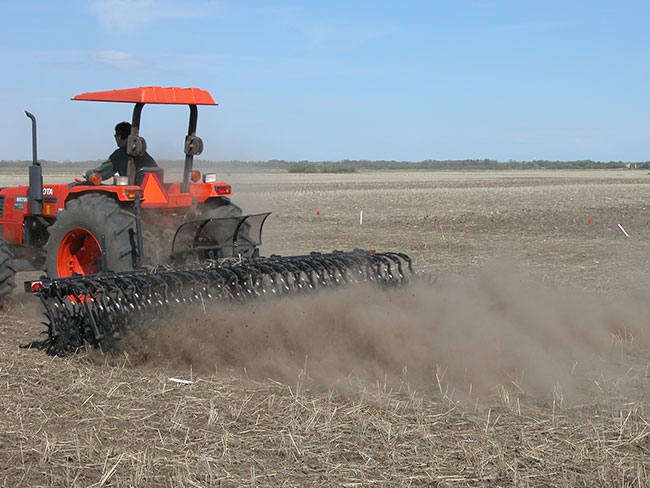 “Canada has the third highest recorded number of herbicide-resistant cases in the world,” says Eric Johnson, a research assistant at the University of Saskatchewan. “One of the biggest concerns is the rapid increase in Group 9- or glyphosate-resistant weeds over the last 20 years.”

“There won’t be easy solutions as resistant weeds become more prevalent. We are screening a number of potential herbicides but haven’t made a lot of progress,” Johnson says. “It will take an integrated approach that will rely on multiple herbicides and different cultural practices.”

Some of the research being done at the University of Saskatchewan, led by Chris Willenborg and Steve Shirtliffe, includes cultural practices such as increasing seed rates and using competitive cultivars, as well as mechanical approaches, such as rotary hoeing, inter-row cultivation, weed wiping, crop topping, weed seedhead clipping and use of the Harrington Seed Destructor.

Valtera is a soil-applied herbicide with a shorter residual than Authority herbicide, and controls broadleaf weeds like chickweed, kochia, lamb’s-quarters and pigweeds. Spring-applied Valtera had injury risk to lentil. In limited site-years of research, fall-applied Valtera provided acceptable control of the early flush of kochia, but further research is required to confirm efficacy and crop safety.

Focus herbicide is highly effective in controlling downy and Japanese brome in winter wheat. It is applied prior to seeding or up to three days after seeding spring or winter wheat. At labelled rates, it controls a range of grassy and broadleaf weeds including kochia, lamb’s-quarters, stinkweed, pigweeds, and cleavers.

Johnson says their research has found that pea and lentils exhibited good tolerance to the pyroxasulfone active in Focus, with pea showing better tolerance than lentil. Chickpea appears to have very good tolerance as well.

For wild oat control with pyroxasulfone, Johnson says research has shown an average of about 70 per cent control, but with a range of 40 to 90 per cent control. Limited research found wild mustard control at about 50 per cent and effective cleaver control on soils with three to five per cent organic matter content.

“For kochia, we had a range of zero to 90 per cent control depending on spring rainfall. Any level of control for kochia would be a bonus for pyroxasulfone in pulse crops,” Johnson says.

Other pulse weed control research
In chickpea, the focus of weed control has been to develop varieties that are tolerant of imidazolinone (IMI) and can tolerate application of Solo herbicide. All varieties under development will have IMI tolerance and a minor use permit has been submitted for registration of Solo herbicide on IMI-tolerant chickpea. However, Solo will not control Group 2-resistant weeds.

In field pea, herbicide layering is a management approach that uses both pre- and post-emergent herbicides offering different modes of action to reduce the risk of weed resistance and improve overall weed control. The main focus has been on controlling Group 2-resistant cleavers on soils with soil organic matter greater than five per cent.

“The ideal approach would be to layer different herbicide groups like Group 3 or Group 4 to help control Group 2-resistant weeds,” Johnson says.

Research in Rosthern, Sask., in 2014 demonstrated the concept and found the following combinations provided acceptable control of Group 2-resistant cleavers in pea:

In fababean, research has been conducted to support minor use registrations of Heat pre-seed, Authority pre-seed, Viper post-emergent, and Heat and Heat plus glyphosate for desiccation. Data has been generated at both the University of Saskatchewan and the Scott Research Farm, and Johnson is hopeful that these potential minor uses will be submitted and registered in the future

Integrated control research
The University of Saskatchewan weed science and agronomy programs (led by Willenborg and Shirtliffe, respectively) have been involved in multiple studies looking at other non-traditional herbicide and non-herbicide weed control methods.

In Australia, Johnson says crop topping is used to control ryegrass at the post-flowering to soft-dough stages using diquat and paraquat herbicides. Growers will even sacrifice crop yield to apply the herbicide at the right timing. A University of Saskatchewan research trial with bromoxynil, diquat, fluroxypyr, Liberty and Heat did not reduce wild mustard seed production in lentil at any stage tested in the first year of trials. In a different desiccation study, Liberty was shown to reduce kochia seed production when desiccating lentils at physiological maturity.

Another research trial led by Shirtliffe at the University of Saskatchewan compared integrated mechanical and herbicide control methods and the impact on lentil yield and net profit. In this experiment, three seeding rates were used for an extra small red lentil (130, 260, and 520 plants per square metre) and six levels of weed control: control; rotary hoe; Heat; one-half Sencor; full rate Sencor; Heat plus half Sencor plus rotary hoe). Rotary hoeing was performed as required when weeds were in the white-thread stage.

Seeding small red lentils at 260 plants per square metre (double the normal rate) resulted in the greatest economic return under this system.

Many of the other treatments had similar or even lower profitability than the control treatment with no weed control methods.

“What we are finding with all the research that has been done is that there are no silver bullets. One of the main problems is the frequency in which producers grow pulses – in particular, lentils. If growers want to grow lentils every second year, they are going to have to expect more problems with resistant weeds,” Johnson says.