News
How early can you plant new corn hybrids?

In early April 2012, a few Manitoba growers planted corn on what probably was the earliest seeding date ever recorded in Western Canada. A year and a few weeks later, they pulled out all the stops to get corn in the ground before it was too late to plant.

Therein lies the question: how early can you plant the new corn hybrids?

Top Crop Manager asked an agro-meteorologist and three agronomists for their thoughts about that early window and planting the 2014 corn hybrids.

In 2012 and 2013, seeding experiences were polar opposites, but yield for 2013 may exceed the 2012 crop. Very early, very good planting conditions in 2012 were capped off at harvest by a new high for average yield. One of the latest starting dates for planting occurred in 2013, and yet the final results were nearly the same for the crop that went into storage.

“It’s nice to get the seed in the ground early and it’s typical for earlier seeding dates to translate into higher yield potential, but a lot of things happen over the growing season that determine what the final yield will be,” notes de Rocquigny. “There’s no reason to panic if you don’t seed until the 8th of May.”

As much as it has changed, corn remains a long-season crop in a short-season growing window on the Prairies. It still needs soil at about 10 degrees before it will germinate. “You want to get the corn in the ground as soon as possible, keeping in mind that conditions need to be good for planting. I don’t think that differs, whether you’re planting a long- or short-season variety,” says de Rocquigny.

“If seedbed conditions are good and everything is ready to go but soil temps are still 6 or 7 degrees, you’d be hard pressed to find a corn grower who wouldn’t be planting.” One reason is that, when it comes to a late frost, corn is less sensitive than canola or soybeans. Normally, a late spring frost won’t touch the below-ground growing point of early corn. Up to the five-leaf stage, it is mostly immune to frost.

Too much moisture is a bigger concern at planting time. It’s a rare spring that finds Manitoba fields too dry to plant; on the other hand, too-wet-to-plant is pretty common in spring. “If it’s too wet, they probably shouldn’t be planting grain corn because it may lead to stand establishment issues,” cautions de Rocquigny.

Once seed is in the ground, it may need to stay dormant a few days until the soil has enough heat for germination. At that point, seed resilience can be a concern. “The longer it sits without germinating, the more exposed it is to insect risk and disease risk. Corn seed sold here is treated, so that gives it a measure of protection against disease and insect pressure.”

Finally, de Rocquigny says, don’t make a planting decision on this, but the anecdotal talk is that today’s hybrid corn is bred for planting into less than ideal conditions so that it is not hit too badly by the cooler, wetter seedbed conditions.

She concludes, “You never know what can happen in the spring. If the conditions are right, guys should be planting their corn.”

McKnight is co-owner and operations manager for Bud McKnight Seeds Ltd. at Carman, Man., one of southern Manitoba’s largest suppliers of hybrid corn seed. “My grandfather grew corn in the 1960s. He was out there in April if he could be,” says McKnight. “Today, it’s the same thing. You see what you’ve got [for conditions] the day you want to plant. You look forward a week, and see what the weather models are telling you. Maybe you wait, and maybe you go.

Today’s generation can plant 320 to 500 acres of corn in a single day while equipping it with seed protection and popup fertilizer. They are able to read the seedbed temperature and have much better forecasts for the week or 10 days ahead – not perfect, but pretty reliable. And they have crop insurance.

When today’s growers push the corn into suboptimal conditions for germination, McKnight says, the insurance claims are more than likely to be about excess moisture rather than temperature or dry conditions.

Despite all the planting capacity and technology, that planting window can become very compressed as April slides into late May. “Sometimes you have to plant into suboptimal conditions,” he says. “Read all the theory and try to practise it as much as you possibly can, but you can’t always go by the book to get it done.”

Manitoba hybrid corn is being planted up to a week earlier on average than it was at the outset of the expansion into grain corn production, according to this independent consulting agronomist located in the heartland of the industry.

For 13 years, Jason Voogt was a Cargill agronomist working with growers in the Roland-Carman-Elm Creek area. In October 2013, he became agronomist of a Bud McKnight Seed subsidiary, Grass Roots Agronomics. His focus has shifted from DeKalb genetics to DuPont Pioneer genetics.

“It’s not a major trend, but there is a move to hybrids with better cold tolerance and better early season vigour,” says Voogt. “Growers I’ve worked with have been on a trend to plant earlier over the last 10 years; call it a week earlier, at the most.”

Basic planting condition requirements haven’t changed in that period, but growers have more experience, more knowledge about the conditions, better equipment and perhaps a set of hybrids that are better adapted for adverse conditions. Voogt says growers lay the groundwork for early planting as they harvest, spreading crop trash and chopping straw at the back of the combine; they prep the land with tillage systems that bury residue, helping the soil to warm quickly; they use vertical tillage to size trash and incorporate it better as well as help move excess water underground; they make field drains to remove the spring melt water; and, they prep the seedbed with fertilizer and starter fertilizer to boost early root development.

Voogt says seed companies are supporting the desire to plant corn as early as possible. “Every company is trying to find varieties with better cold tolerance in spring.” Voogt saw the evidence of those improvements in May 2012 when, after very early planting, a late frost one morning hit corn in the three-leaf stage. “They had a pretty good late frost that did kick a bunch of our corn. It burnt off a lot of leaves, but those plants grew right back. They sent out new leaves and – likely because of the warm summer in 2012 – those plants reached maturity and still produced exceptional yields.”

April weather conditions in Manitoba may be a little more favourable to early planting, as opposed to a few decades ago, according to the Weather Innovations operations manager for Western Canada and agro-meteorologist, Andrew Nadler.

The company has recently expanded from Ontario to Western Canada, and is operating a high-profile online service with upwards of 1,000 weather station sites.

Over the past half century, Nadler says the last spring frosts have been getting earlier, and the Prairies have a slightly longer frost-free period. “We’ve found that average temperature increases have been more pronounced in the winter and spring, so we are seeing warming springs,” he notes. “That, along with a longer frost-free period, is pretty ideal for putting longer season crops into the field.”

The changes are “pretty gradual” and “not uniform,” says Nadler, but gradually emerge from the clutter of data points as the perspective gets wider and longer. At the 10-year local level, analysis won’t show a reliable trend; at the century and Prairie-wide level, it does.

There was near panic in April 2013 at the level of snowpack remaining, but it quickly disappeared in early May. That was an anomaly, says Nadler. “We’ve seen snowfalls generally decrease across Western Canada since the 1950s. We’re seeing a little less snowfall and a little more rainfall. That can lead to fields being black sooner than they were a few decades ago.”

Weather-wise, three things are helping today’s farmers to succeed at planting corn a bit earlier. “The trend in climate data shows we are getting more heat units in the growing season, a little more warming in the spring and an earlier end to frosts,” says Nadler. “I think those three factors are significant. They may not be huge in terms of numbers, but together they are reducing the early planting risks for hybrid corn.” 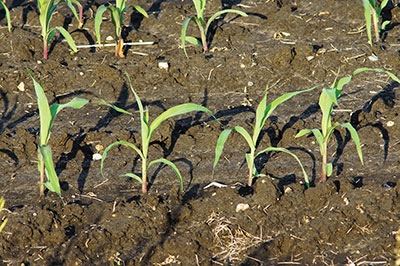 More heat units in the growing season In early April 2012